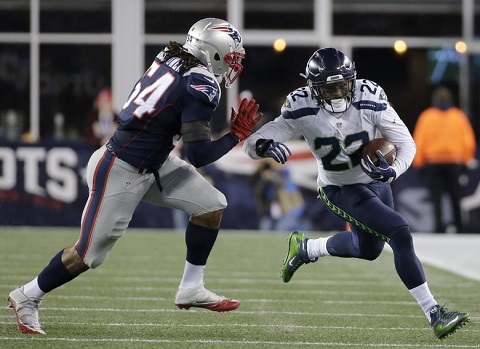 If there was any question at all as to who was in command of the Seattle backfield until Thomas Rawls returns, C.J. Prosise answered with a swift and precise Dolemite style backhand. Last Sunday against the Patriots he not only dominated the carries (17 to just 5 for Christine Michael) he was a monster in the red zone, as he toted the rock six times inside the 20-yard line – including five times inside the 10. He’s clearly carved out a relevant role within Pete Carroll’s offense. Now, if you want to poke holes in this theory, be my guest – he averaged less than three yards per carry in the red zone. There, I teed it up for you. Regardless about how you feel about Prosise going forward just remember this: He caught all seven targets he saw in Week 10, totaling 87 yards. In my opinion, what we have here is at worst a PPR factor and at best someone who can propel you to the fantasy playoffs. I’ll take that one hundred percent of the time. This week he’ll square off against the Philadelphia defense and by no means is that an easy assignment. The Eagles rank 12th in the league in rushing yards allowed, giving up 100.6 per game. They’ve only surrendered 4 rushing touchdowns this season, but that’s okay as I’m not wavering from my Prosise recommendation this week. With the release of Christine Michael and Thomas Rawls’ effectiveness still in question, Prosise is in for what should amount to a sizeable workload. And as mentioned above, he should produce serious dividends in the passing game this week. Because as we all know, opportunity usually equals volume for feature backs.

Here’s a look at a few more of my favorite passing and rushing matchups for Week 11:

Andrew Luck – Over the last four games, Tennessee has allowed opposing QBs to score 29.4 points per contest, while yielding 29.2 points and 12.2 to opposing WRs & TEs respectively. For all the hype the Titans’ offense has gathered recently, their defense has been an absolute sieve.

Marcus Mariota – There’s bad defense and then there’s whatever the Colts have been doing this season. That’s good news if you plan on rolling out Mariota this week. Captain Aloha ranks fourth in fantasy points for QBs this season, behind Matt Ryan, Drew Brees and Aaron Rodgers and he’s produced 10 touchdowns (9 passing) over his last three games. The Colts passing defense has allowed a staggering 287.9 yards per game this year (31st) and they’ve allowed 17 passing scores against just three interceptions. One other item of note: The Titans have been the most efficient red zone offense in the league thus far – scoring a touchdown 77% of their time inside the twenty.

Tyrod Taylor – Thank God for Tyrod and his matchup with the Bengals this week. Cincinnati’s allowing opposing QBs to rack up 25.2 fantasy points per contest this season and they rank 17th in the league in passing yards allowed (258.7) with 19 passing scores handed out thus far.

LeGarrette Blount – Well what do you know? The 49ers are next up on the schedule for the Patriots and Blount should be the main beneficiary this week. The 49ers rush defense has been a train wreck recently, allowing an average of 34.8 points to opposing backfields from Week 7 to Week 10. While his 3.7 yards per carry won’t move the needle, Blount is leading the NFL in touchdowns (12) while logging the fifth-most carries (182) through nine games this season.

James Starks – I’m not worried about the recent signing of Christine Michael, this week should be all about Starks. Washington averages 115.2 rushing yards allowed per contest and they’ve given up 13 rushing scores this season, which is good for second-most in the league. If you’re into the heavy analytic type of thing…Football Outsiders ranks the Redskins’ rush defense 30th in Run DVOA. Also, Vegas has tagged this game with an O/U of 51 points. Get. Excited. Y’all.

Rob Kelley – Let’s stay in the same game. Shall we? Green Bay has been obliterated by opposing RBs  lately, giving up 19.8, 20.1 & 27 points over the last three games. Another important note: The Packers have allowed opposing backfields to average 4.5 yards per carry since Week 4.