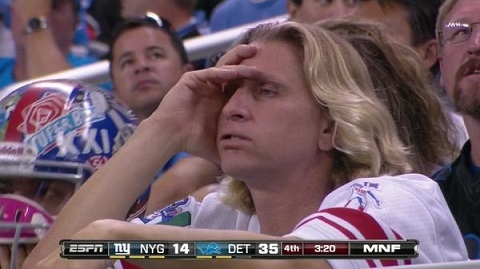 Well, as referenced last night, the derpiness was magnified 10-fold with two Monday Night Football games being played. For the Giants, well, I can only say that it’s my honor to watch Tom Coughlin’s last year as head coach. The team looked drunk most of the night, I guess wanting to join in on my fun. The optimist in me would say that things can only improve from here on out, but I know Eli Manning better than that. (He’s on pace for 32 interceptions. I believe!) On the flip side, we saw Matthew Stafford and Calvin Johnson play catch for most of the evening. There must have been something the Giants defense could have done to prevent all those touchdown passes to Megatron. Maybe they could have had some of their players around the area that Mr. Johnson occupied, perhaps making it more difficult for the ball to be thrown to him? They could call this wonderful new invention “pass coverage”. And while in the second quarter when the game was still close, it looked like all the other Lions games I’ve watched, where the two teams are essentially two friends at dinner arguing over who is going to pick up the check. Eventually, someone gives in, but the act is just weird over-generosity at that point. But alas, the game ended pretty quickly thereafter and we were left with an important question: Are the Lions good at football, or are the Giants a dumpster fire?

As for the Chargers and Cardinals, I could tell you what happened during the first half, but you’d either fall asleep or get stigmata. There were not enough drugs in this world to get through those 18 hours. Also, Berman and Dilfer announcing has to violate the Geneva Convention or something. The second half started off completely different, as I guess someone told the teams that touchdowns were actually allowed in the NFL. Malcom Floyd was the beneficiary here, and as I’ve been trying to tell everyone, ride him all the way to the IR. Soon thereafter, some points were scored by both sides, and the game mercilessly ended about two hours past my bedtime. Essentially, watching this game was like watching two eight-year-olds play Madden after drinking a gallon of Mountain Dew.

Matthew Stafford – 22/32, 346 YDS, 2 TD and 4 CAR, 2 YD. Stafford threw for more first quarter yards than he ever had the year after Taco Bell started serving breakfast. Coincidence? I think not.

Golden Tate – 6 REC, 93 YDS and 1 CAR, 4 YDS. The Giants proved they can refuse to cover other wide receivers too.

Joseph Fauria – 1 REC, 26 YDS. The Lions have exceedingly large and athletic humans in their employ.

Victor Cruz – 2 REC, 24 YDS. Somewhere, a lonely, dejected Victor Cruz skips a rock across a pond. Only took three quarters for Eli Manning to find him.

Carson Palmer – 24/37, 304 YDS, 2 TD and 3 CAR, 30 YDS, 1 FUM. Palmer seemed determined to spread his misses among all of his receivers last night, yet still ended up being quite competent.

Michael Floyd – 5 REC, 119 YDS and 1 CAR, 2 YDS. I think it was very clear that Floyd is the Cardinals primary receiving option moving forward. To be honest, after last night’s game, he appears to be their only receiving option.

Keenan Allen – 5 REC, 37 YDS. Does this Keenan Allen fellow whom I used a high draft pick on actually exist?

Antonio Gates – 6 REC, 81 YDS. This should serve as evidence to support what I said this pre-season. Ladarius Green is talented and is the future at Chargers tight end, but that breakout will be subdued somewhat this season because Gates remains the primary go-to receiver for Rivers, even with half a functioning hamstring.