HISTORY IN THE MAKING PEOPLE

In what was an oft-rainy night an Lambeau Field (IF ONLY IT WERE SNOW, WE’D ALL EXPLODE), our long national nightmare finally ended. No, Alex Smith did not retire. Instead, he finally threw a touchdown to a receiver (shown above), something that hadn’t happened in the Chiefs last 17 games. Or, in calendar terms, not since December 8th, 2013. Folks, Andy Reid’s long con has finally paid off. That being said, it’s so very Chiefs that the record-breaking extravaganza for a useless stat occurred in a game in which they basically got blown out. The garbage time was strong with this one (even almost bringing the game within one possession with 1:25 to play before botching the two-point conversion), but it’s abundantly clear that the Chiefs may not be that good at the footballs. In a striking follow-up point, the Packers have shown that they might be pretty good at the footballs. If someone made a movie based on my time here at Razzball, it would be called: An Analytical Life. Or quite possibly WHERE ARE MY DATES? I WAS PROMISED DATES. But enough about myself and my movies, let’s make fun of Alex Smith more…

Davante Adams – (2 TGTS.) Exited last night’s game after the Packers first possession, presumabley from reaggravating his left-ankle injury. We’ll have to wait and see what news comes out today, but as of now, James Jones, Ty Montgomery, and Jeff Janis all stay fantasy relevent. Okay, maybe not Jeff Janis… (WHYYYYYYYYY?)

Randall Cobb – 7 REC, 91 YDS, 3 TD. Nice of McCarthy to remember that Cobb exists. Or maybe he just got confused when he read “Cobb Salad” in his Denny’s Menu. Probably helps that for a team named the Chiefs, they sure defended like Custer.

James Jones – 7 REC, 139 YDS, 1 TD. How is James Jones so good and yet so sh*tty, all at the same time? I feel like he exists on two planes, almost like a buffer, the space in between Aaron Rodgers and Alex Smith, if you will.

Eddie Lacy – 10 CAR, 46 YDS and 3 REC, 41 YDS. Unlike Adams, Lacy looked pretty uneffected by his ankle injury. However, McCarthy didn’t really need him that much when Rodgers and his recievers took over the game. So I wonder what McCarthy’s excuse is for all the other games?

Aaron Rodgers – 24/35, 333 YDS, 5 TD and 2 CAR, 16 YDS. THIS GUY AARON RODGERS, I CALL HIM JOHN CHIVINGTON, BECAUSE HE MASSACRED THE CHIEFS! I feel like my Grudenisms are getting danker with every Monday Night Football post. I look forward to the fall…

Richard Rodgers – 2 REC, 15 YDS. What are the odds of two guys who spell their name “Rodgers” ending up on the same team?

Charcandrick West – (1 TGTS.) Is this his real name or his stripper name? 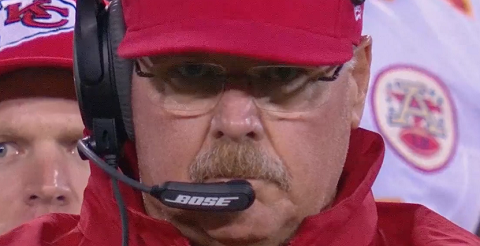