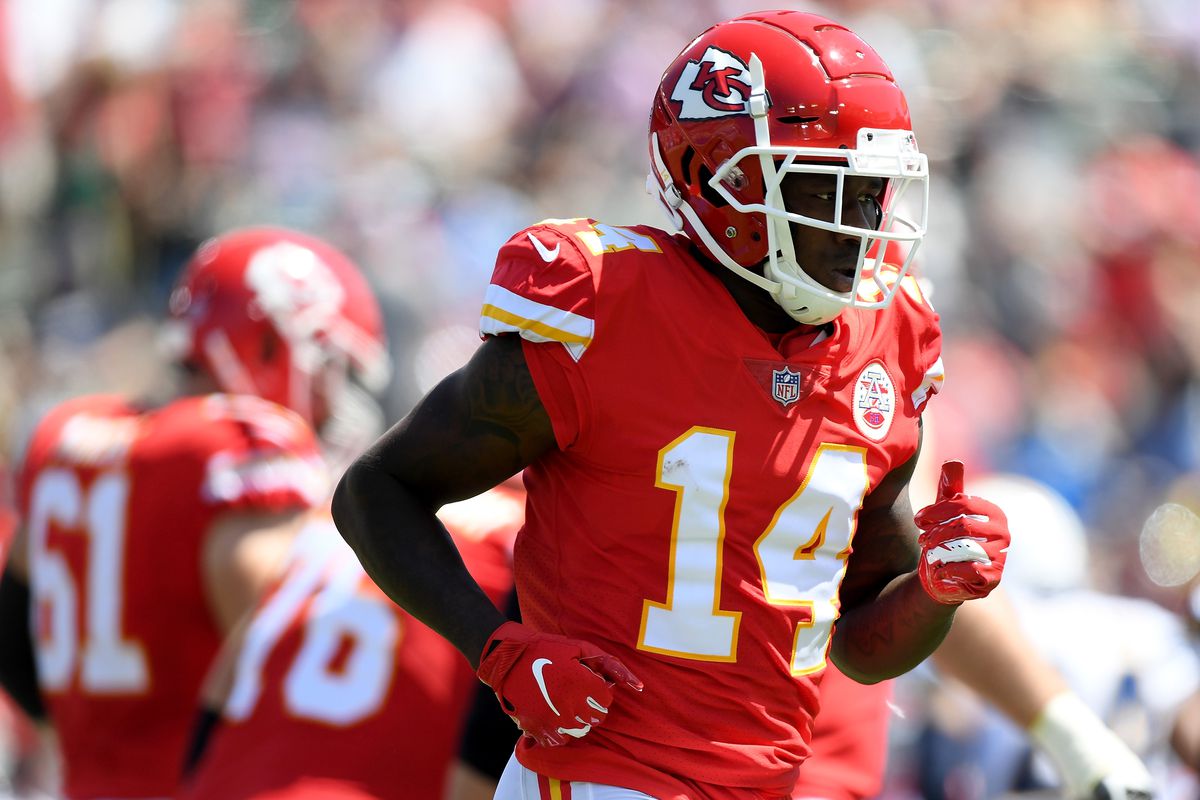 With so many great offenses in the NFL, we want as many pieces of the offensive pies as we can get. However, most of the top talent on each of the top offenses carry expensive ADP price tags with them, and are some of the most popular players in fantasy (thanks captain obvious). However, there are some instances across the NFL where we can get WR2 and 3’s on the top offenses for a fraction of the price of their counterparts, but still have some serious upside. Some of these options may even finish in the Top 20, giving us great return on a cheap price tag.

A lot of Watkins’ fantasy stock rests on if Tyreek Hill will miss any time this season. If he does, then Watkins immediately becomes a legitimate WR1 on one of the best offensive teams in the NFL. Last season, Kansas City ranked 1st in pass offense DVOA, and 4th in total offensive DVOA. The Chiefs also ranked 1st in explosive passing rate, per Sharp Football Stats. We want every piece of this Kansas City pie in fantasy, and Watkins provides a cheap entry way into this offense. We’ll have to monitor the status of Hill throughout this offseason, and there’s always the chance that Watkins’ ADP skyrockets if any news of a suspension breaks, but until that happens, I love Watkins’ fantasy potential this season.

When you think of efficient offenses in the NFL, the 49ers don’t really come to mind. They finished 19th in total offensive DVOA, and 23rd in pass offense DVOA. However, one stat jumps out to me, and that’s the fact that they finished 4th in the NFL in Sharp Football Stat’s explosive passing rate, and 2nd in the NFL during weeks 8-16. We saw some sparks of life in this offense last year, and I think they’ll take a massive leap forward with the healthy return of Jimmy Garoppolo. Dante Pettis is a great breakout candidate this year, and is available for a cheap price in the early eighth round. In his final six games last year, the rookie played at a pace of 64-989-11. He should only continue to get better, as will the rest of this offense, in another year under Kyle Shanahan and with the return of Jimmy G.

Like Pettis, MVS is hoping for a breakout season in his second year in the NFL. Last season, the Packers as a whole didn’t play as well on offense as we know they can, ranking 15th in the league in offensive DVOA, and 12th in pass offense DVOA. We know this is a Top-5 passing offense when we get the best version of Aaron Rodgers, and I think we’ll get damn near close to that version this upcoming season, especially with the arrival of new HC Matt LaFleur. There’s a lot of opportunity here for MVS, with 114 targets and 669 (nice) air yards available thanks to the departure of Randall Cobb and a few other supplemental receiving pieces. With an ADP in the 11th round, there is almost no risk to grabbing MVS as a fantasy WR4/5 that has a legitimate chance to be the WR2 on one of the best offenses in the league.

Over the past decade or so, the Pittsburgh Steelers have developed some of the best receivers in recent memory. Mike Wallace, Emmanuel Sanders, and Antonio Brown have all blossomed into Pro-Bowl receivers, and then eventually left town. Each time, it seems like Pittsburgh has the next big thing waiting in the wings, and now, it’s JuJu Smith-Schuster’s time in the Steel City. However, James Washington could be a legitimate WR2 in one of the best offenses in the league, and could become the next JuJu Smith-Schuster. There’s a lot of available targets up for grabs in this offense, and Washington steps into the mix as the second-best receiving option for Big Ben with Top-20 upside in fantasy. He was an impressive collegiate prospect, and with an ADP in the 13th, we’re getting a great piece of the Pittsburgh pie. One that doesn’t seem to skip a beat, year after year.

Funchess had a disappointing season last year in Carolina, as he lost work to both Curtis Samuel, and rookie D.J. Moore. However, he’ll now have to compete with rookie Parris Campbell for WR 2 duties, but he’ll now step into one of the most exciting pass offenses in the NFL. Last year, the Colts finished 10th in the NFL in pass offense DVOA, and 4th in passing success rate. The Colts have struggled to have a legitimate WR2 for the past few years now, and Funchess gives Andrew Luck and Co. this receiving threat. With a price tag in the 14th round, Funchess carries zero risk, and can easily get back to the 8-TD mark that we saw from him in Carolina.