Hello all, it’s the most wonderful time of the year – NFL draft season. I have put together my top 10 running backs for you using a combination of production metrics and film.

Without getting too technical, my process heavily weighs volume for running backs. It has been shown that usage in college projects usage in the pros (with the occasional exception). Other college production metrics come into play, for example, efficiency AND volume is better than volume alone and of course projected draft capital has to be considered. Finally, the last step is to turn on the tape and see what traits jump out and how they convert their skills into the production that the stats show.

This list reflects who I would prefer in a vacuum on talent alone. Landing spot is a bigger consideration for me at the running back position than it is for quarterbacks or receivers. So, there will be a higher likelihood of shuffling post draft on this list compared to other positions. Still, I think we should pick players mostly on talent first and the other factors are more like tie-breakers rather than a major consideration. All metrics come from the campus2canton.com data app and athletic testing from mockdraftable.com.

A Personal Note on Pro Days

For running backs, athleticism seems to matter more than it does for receivers. It is a more important part of the equation for me at this position. That being said, extremely athletic testing is nice but unless its coupled with on-field production I am unlikely to move a player up because he ran a 4.2 forty or jumped 46 inches. However, these testing numbers do impact NFL decision makers.

GMs still seem to be wowed by a track star more than a quality football player at the skill positions. So, if these numbers matter for how teams rank players, it impacts projected draft slot, and therefore we must consider it.

The Alabama workhorse is destined to go in the first round of the actual NFL draft, and that buys opportunity. He’s the surest bet in this RB class to go in the top 32 picks and for fantasy that’s a huge part of the equation. He showed dominance in all phases of the offense over his final 2 seasons in Tuscaloosa.

While I have some questions about his overall athleticism, he has the size and receiving ability to be a three-down bellcow in the NFL and any team that invests a first round pick in him will likely use him as such. If he winds up in Pittsburgh as many mocks suggest, I’m comfortable projecting 20 touches in week 1 and good chance at a RB1 fantasy finish.

While Harris has an excellent senior season on his resume, Williams does not. That’s because he has elected to come out early as a junior. Because of this it is imperative that we gauge players based on age-adjusted production, and Javonte Williams’ career trajectory is on pace with Najee Harris. As a sophomore Williams earned more of the backfield production than Harris and as juniors, Williams was neck and neck with Harris in terms of dominator rating.

Dominator rating is used for projecting future success and measures the percent of the team’s production (yards and scores) attributed to a given player. See graph below comparing the two courtesy of campus2canton.com’s player metrics tool. This is even more impressive when considering Williams was competing with an older Michael Carter while Harris was the oldest in his RB room. I believe Williams gets second round draft capital and will have a solid rookie season for fantasy purposes. 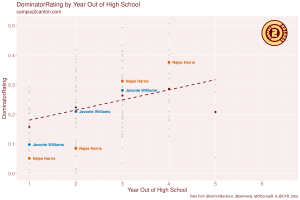 The last back in the top tier, Etienne has a chance to go in the first round but more likely will find himself taken early on day 2. Like Harris, it was widely assumed he would have declared early as a junior but elected to return to school in 2020. He possesses outstanding straight line speed and has dominated since his freshman year but something just doesn’t feel right about Etienne to me.

He’s been so good from early on, why would the NFL have suggested he stay in school? By almost every objective angle he is a future stud, yet something has held him back. Most educated film scouts say he lacks vision, lateral agility and is a questionable receiver. Given his excellent burst and long speed if he becomes a complete back, Etienne has the highest ceiling of the class. I fear he may be pigeon holed as a role player and may fall in the draft, which drops him to third for now.

There is a large gap between RB3 and Sermon at RB4 in this class. I have arrived at Sermon being the “best of the rest” but in this class that may not mean much. There is a good chance no one after Etienne will get drafted before the 3rd round and for running backs that makes projecting a heavy workload difficult.

If anyone past Etienne is going to be viewed as a bellcow by the team that drafts them I think it’s Sermon. He is well built at 6’1”, 215 pounds and has shown adequate receiving ability. Most surprisingly he tested as a great athlete with a 94th percentile 10 yard split, and above the 80th percentile in the broad jump, vertical jump and 3 cone drill (chart from mockdraftable below). While he never dominated a backfield in college, he flashes power, quickness and burst. His ADP should stay relatively low and I like him as a later rookie running back selection.

Hill produced very well in 2018 as a true sophomore in the SEC for Mississippi State. He had an excellent backfield dominator rating above 55%. Backfield dominator measures an RB’s production in the context of other RBs on his team. It’s a simple average of a player’s share of his team’s RB rushing and receiving production (yards and touchdowns), created by Rotoviz and explained here.

He then had another quality junior season and elected to return to school. However, Mississippi State made a change at the top and hired Air Raid aficionado Mike Leach. This extreme pass-heavy offense did not suit Kylin Hill very well and he played 3 games before opting out. The nice thing is that he showed he can be used as a receiver, reeling in 23 balls in only 3 games. I think he can be a quality back in the NFL if given opportunity.

Once thought to be a future stud, Hubbard enters the NFL draft with a lot of question marks after an injury filled, COVID-shortened, awkward redshirt junior season. Dealing with an ankle injury that may have blunted his agility, Hubbard had his worst season at Oklahoma State. After 2 sensational seasons 2020 was a flop, where he saw his average yards per touch drop by almost 2 yards.

His weaknesses were on display as the Cowboys’ offensive line was less effective and Hubbard failed to show above-average agility needed to create on his own. Shockingly he did not test as the elite sprinter we assumed, registering a 4.51 forty time at his pro day. Almost every possible arrow for Hubbard is trending down as we approach draft day. The one positive is that he weighed in at a solid 210 pounds. He sits at RB6 here, with some glimmer of hope he could regain the game-breaking speed we saw prior to 2020.

Like most of the backs in this class, you have to focus to see the potential in Jefferson. He boasts one of the better true freshman seasons on record when he turned in a 265-1527-12 all-purpose season. He weighed in a little light at 5’10” 207 on his pro day, then followed it up with very unathletic testing numbers.

The workout was surprising because he seems to show legitimate long speed on film as one of his better attributes. While receivers can win without great athletic numbers, running backs seem to be the opposite. I don’t think Jefferson will have requisite draft capital to get a chance to make an early impact and his NFL future is dim.

After a second year explosion for over 2000 total yards, Gainwell opted out in 2020 and we haven’t seen him on a football field for quite some time. He weighed in at his pro day at 5’8” and 201 pounds, which was much shorter than expected as he was listed at 5’11” at Memphis. While his BMI checks out, the facts are very few running backs are viewed as feature backs in the NFL at 5’8”.

I think Gainwell can be used as an offensive weapon both as a runner and receiver but is unlikely to ever see the volume needed to be a difference maker in fantasy football. I also think there is a good chance he will be a day 3 pick and that really caps future value. In PPR leagues, his 51 receptions in 2019 provide some hope for a fantasy friendly role.

Coming out of a Group of 5 program, Mitchell does have some interesting attributes. He tested as an excellent athlete over 90th percentile in the 20 yard split, 40 yard dash and broad jump (per mockdraftable.com). Slightly disappointing however, is that he weighed in about 15 pounds less than his college listed weight at 201 pounds. So while he was a great tester, keep in mind his weight is now an issue when projecting a major NFL workload.

Mitchell’s tape did not wow me, and he seemed to get what was blocked most of the time but failed to create yards despite his obvious explosion. He was used somewhat in the passing game and on paper seems like an intriguing prospect. The concerns are he performed at a group of 5 level and failed to separate from classmate Trey Ragas during his career. All things considered, he seems destined as a change of pace back in the NFL.

Unfortunately, Michael Carter is a major faller throughout the draft process. The lightning to Javonte Williams’ thunder in Chapel Hill, Carter had a fantastic finish to his career. He accounted for almost 2700 yards over his final 2 seasons, including 46 receptions over that time. Things started to go south once the season ended, however. His dimensions were smaller than listed at UNC, checking in under 5’8” and 201 pounds.

Athletically he also turned in a mixed bag. While the 40 time and jump drills were subpar, he showed incredible agility in the 3 cone and had a 97th percentile 20 yard shuttle time. In the end, his size will cap his draft position and workload while his lack of long speed will limit his big plays in the league. I don’t see a fantasy relevant role for Carter at the next level. When comparing him to the other smallish pass catching back in this class, I think Gainwell and Mitchell showed a lot more at a younger age which probably makes Carter the third most intriguing satellite back in this draft (graph courtesy of campus2canton.com). 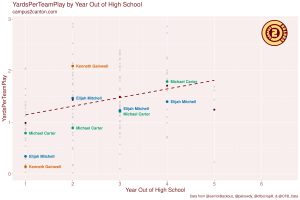