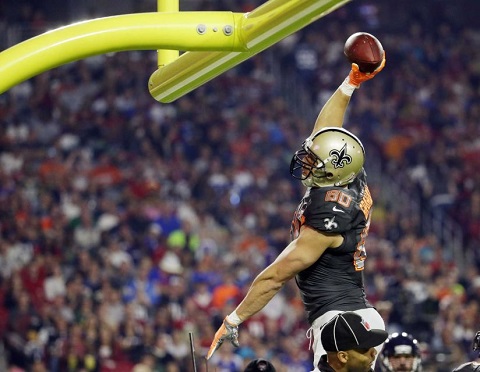 So here we are, continuing our weird no-man’s land period for fantasy football news and analysis. We’re not quite far enough into the off-season to start reviewing what just happened in 2014, and we still have one more week until the Super Bowl, so we find ourselves in this sort of weird zone, like I am with your mom. But as we get closer to Super Bowl Sunday, we might finally reach the end of the “deflate-gate”, or seeing as how ending anything “gate” seems a bit dated, we could even call it “deflate-ghazi” for a modern touch. That being said, we do get some reprieve for the first Sunday without real football this season, and that’s football where no one tries or cares, and everyone misses going to Hawaii, and where Michael Irvin gets to have a team to, I assume, help feed yet another coke binge. Also, it appears that this year, there wasthe added bonus of making it NFL’s own petri dish of experimental football where there were narrower uprights, four two-minute warnings, and no kickoffs whatsoever. Ladies and gentlemen, I give you the Pro Bowl. These players represent the very best of the league, that is, after you rule out the players who are injured, the players who simply didn’t want to go, and the players who are going to the Super Bowl. So yeah. We have Andy Dalton and John Kuhn. WOOOOOOOO.

Mark Ingram – 11 CAR, 72 YDS. Remember last year when Mark Ingram was terrible-to-mediocre? What happened? I only ask because I’m sure fantasy owners around the globe who owned him every year prior want to know. Or maybe they just want to forget. Why not both?

John Kuhn – 2 CAR, 31 YDS. Something like 239 players were selected to the Pro Bowl this year that couldn’t or didn’t want to play. Thus, I give you John Kuhn. Giving the fans what they want.

Antonio Brown – 6 REC, 98 YDS. Antonio Brown is the second coming of Jerry Rice. That’s it, that’s all I wanted to say.