Weeks or months of boredom can make a person do crazy things. These crazy things can include making a commitment that could easy last a half of a decade or more. Hey, it’s a good way to abstain from making a commitment that could last 18 years by making a quarantine baby. It’s all about give and take. And trust me, there is no bigger turnoff to your quarantine partner than doing a slow dynasty draft in late March and early April when kick off is still 5 months away. So it seems that 12 of us chose wisely by participating in the Quarantine Invitational.

This league was put together by Razzball’s own  Al_FF_red (you probably know him as Boof). He reached out to 5 other writers that he is fans of or friends with to participate. This group makes up the Touts division. There is also the Doubts division. This division is made up of Boof’s pals who he probably refers to as fans. The Doubts division is made up of some sharp drafters who are also some pretty funny dudes, so there will be no discounting of their intelligence.

If you didn’t do the required math, this is a 12-team league. It is a PPR superflex league with a boost of 2 extra points for passing touchdowns (6 points total). The pro section of the draft was 25 rounds and that is what I’ll be writing about. I believe that Boof will be writing about the Devy section later this week. We are still in the process of finishing that part up. 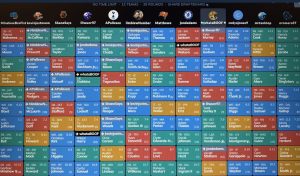 This is the best that I could do as far as screen shots of the draft board, but hey, it’s better than nothing. If you’re on your laptop, just click on the top picture to enlarge it and it’s pretty easy to read. I drafted from the 7th spot, which is one of my least favorite spots to draft from, but I think it turned out pretty well for me.

Michael Thomas was sitting on the board at #7 and I couldn’t pass him up. Even with Emmanuel Sanders joining the Saints. To the surprise of nobody that reads my stuff, I snagged Miles Sanders in the second round. You can read my Sanders post where I gush over his potential. I was happy that Josh Allen fell to me in the 3rd round. The addition of Diggs to the Bills could be the boost that he needs to be even better than he was in 2019. His downside is lack of passing touchdowns in a touchdown premium league, but rushing touchdowns still count for 6 points as well.

In the fourth round, I was thrilled to grab Kenyan Drake who will be a big part of the Cardinals offense that I believe to be very dynamic. I found good value in the next round adding Allen Robinson who is coming off of a quietly great season with the Bears. I followed that up in the sixth round by taking Darren Waller. To be honest, I’m a little worried that he is a regression candidate, but I thought he was worth a shot. In the following rounds I grabbed DeVante Parker who I believe will be just fine as a WR3 with a lot of upside and also Raheem Mostert, who may end up being in a messy RB situation in San Francisco, but there is no way that he’s not a big part of it.

I’m new-ish to dynasty leagues, but I wasn’t afraid to take a stab at some rookies! I took Clyde Edwards-Helaire as my RB3. It’s tough to draft rookies at this point because the NFL draft hasn’t happened yet. I like CEH a lot, especially when I got him. CEH has been linked to Tampa Bay quite a bit and that is the best situation for a rookie running back after the RB craziness in free agency. I don’t see Tampa Bay being the same pass happy team that they were now that a 43-year old will be under center. This offense will probably be more balanced. I took Jordan Love too early. There is a lot of potential he becomes a good pro quarterback, but there is career back up potential too.

I took K.J. Hamler who I believe has the potential to be a huge asset to someone. There is also bust potential there because of lack of size and he sometimes has brick hands. The last rookie that I grabbed was Van Jefferson. Jefferson is a sneaky Cooper Kupp type who is one of the best route runners in the draft class. The production wasn’t huge in college because Florida has a tendency to spread the ball around.

Teddy Bridgewater and Mitch Trubisky hopefully can provide at least something while I wait to get Trevor Lawrence who I took in the Devy draft with the first pick. The rest of my draft was depth that I could see making an impact and there wasn’t anything too exciting. I do like getting Rashaad Penny as late as I did. If something ever opens up for him, I still believe that he can be a star.

I think Boof’s team is going to be the team to beat in year one. His Godwin-Sutton-Golladay combination is absolutely dynamic. Nic’s RBs will be tough part of his team to beat and he will have some trade bait if he needs it. His wide receivers will be developmental but I think that he has something. Cody Jones has a lot of balance with his squad. Adams-Hill-Ekeler-Montgomery-Baker-Chark-Diggs is a hell of a base.