I’m going to take a look at the quarterbacks average draft position and how they finished. Ok? 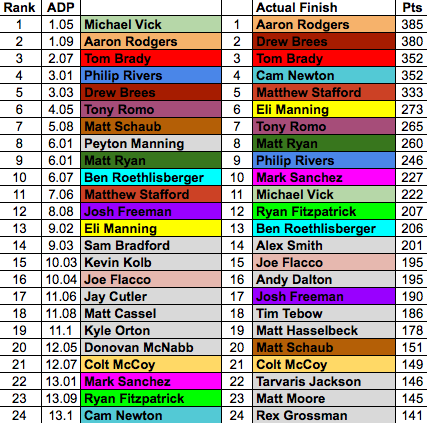 Michael Vick was a disappointment. He missed 3 complete games and was playing hurt or left a couple more. In games he played in he averaged a little over 17 fantasy points which would put him in the Eli Manning range or 6th overall. Either way his numbers didn’t come close to justifying a first round pick.

Aaron Rodgers finished as a top two fantasy quarterback for the third year in a row and depending on your scoring this might have been his third #1 finish in as many years. That kind of consistency just doesn’t happen that often. His 122.5 passer rating was the highest of all time which is one reason he’ll probably be MVP. He’ll be a no doubt first round pick next season.

Tom Brady was the only quarterback to finish exactly where his ADP was. After Brady’s record breaking 2007 he was out in ’08 with an injury and then had a down ’09 but has come back with two third place fantasy finishes in a row. He started the season on pace for 22 billion yards passing but only finished with a record breaking 5,235 yards, well, Dan Marino’s old record that is. As long as Welker, Gronk and Hernandez are there he should continue to play well.

Philip Rivers threw 7 TDs to 10 interceptions in the first 8 games and finally turned things around in the second half throwing 20 TDs to (a still high) 10 interceptions. There was speculation all season that he was playing hurt and I suppose that could have been the case because he made some awful throws but getting Malcom Floyd back for the last 5 games did seem to help. It will be hard to rank him for next season because we know he can put up huge numbers but will he?

Drew Brees set the record for most passing yards in a season with 5,476 and also threw 46 touchdowns which was good for 4th all time and his 71.2 pass completion percentage broke his old record of 70.6 in ’09. And that came with 657 attempts. So naturally his 468 completions was also a record. Yes he threw the ball a ton but Matthew Stafford had more attempts. These records weren’t based solely on volume and scheme. This dude can play.

Peyton Manning: He absolutely killed me this season but I knew the risks. Draft a healthy quarterback is the new rule in the fantasy football for dummies rule book I just wrote for myself. His future is up in the air but that discussion is for another day.

Matthew Stafford: He had a few down games scattered in the middle of the season but he finished the fake playoffs in a blaze of glory. As long as the Lions are going to have him averaging 41 attempts a game and the players around him continue to get better or just be Megatron he only can get better. And he has yet to turn 24 (Andrew Luck is 22).

Cam Newton: There’s not much to say about Cam, but Damn! If you take away all his rushing yards and rushing touchdowns he still had arguably a better rookie season than any other quarterback since the merger. He broke Peyton Manning’s rookie record for most yards passing, was 3rd all time with 21 TD passes, had a higher passer rating than Manning finishing 8th all time for rookies and his 60% completion rate put him at 7th all time and ahead of greats like Marino and Manning. Oh and now you can add those rushing stats. He ranked 11th all time for touchdowns scored by a rookie. That doesn’t count the ones he threw of course. His 14 rushing touchdowns doubled the rookie record set by Vince Young and beat the all time record by Steve Grogan. His 35 total touchdowns passing and rushing was also a rookie record. And I’m sure there are plenty more odd records out there I missed and plenty more he is poised to break if he keeps this up.

While looking up running quarterback stats I came across this gem —

Orban Eugene “Spec” Sanders: In 14 games in 1947 Spec Sanders of the New York Yanks rushed for 1432 yards/18 TDs, passed for 1442 yards/14 TDs, punted for a 41 yd average, returned 22 kicks for 593 yards and a TD, returned 6 punts for 154 yards and had 3 interceptions. He played form ’46 to ’48 but had bad knees and had to retire. In 1950 he was lured back to the game but since he still had bad knees he played strictly on defense and went on to intercept the ball 13 times for a then single season record. Two years later his record was broken by Night Train Lane when he intercepted 14 in 1952 (he amazingly did it in 12 games). That number still holds to this day.