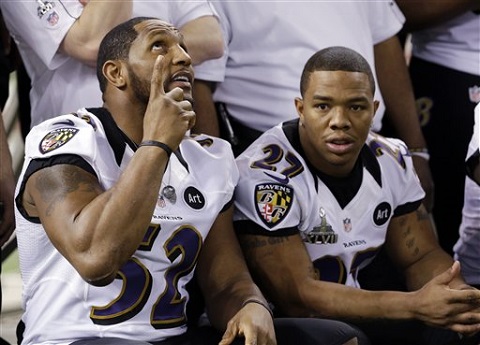 Razzball is usually known for humorous, pun-filled titles that tickle you in all the right places. And at first glance, you may have gone “Jay, where’s the funny brah?”, so I should state for the record that the title actually is a joke. Announced by the league yesterday afternoon, Baltimore Ravens running back Ray Rice has been suspended for the first two games of the 2014 season for violating the NFL’s personal conduct policy following his off-season arrest for domestic violence (from Rice’s altercation with then-fiancée Janay Palmer at an Atlantic City hotel in February, full story here). When the news broke on this in February, I had some thoughts on the matter, and since I try to use my brain at least a few times a day (no promises), I have even more thoughts following yesterday’s news. ALL THE THOUGHTS.

Obviously, since we focus on fantasy football, there’s really no forum here to state that Ray Rice would have to assault seven more women to get the same suspension Josh Gordon received for smokin’ the green. And we can’t really talk about how strange this apology was:

Yes, that’s right Janay. You should totally regret any actions that you took which I’m sure justified you being knocked out unconscious and dragged on the floor. HOW DARE YOU BUY APRICOT JELLY WHEN YOU KNOW I LOVE THAT STRAWBERRY STUFF. And I guess we can’t talk about any lack of jail time. So what can we talk about? Well, that’s 67 yards the Ravens offense will never get back…

In our running back rankings, (Standard, PPR), I was especially very bearish on Ray Rice, and because of that, Bernard Pierce saw an uptick in value with Lorenzo Taliaferro checking in as a legitimate sleeper candidate. This was back when I thought some jail time and an extended suspension made sense for assaulting another human being, but I’m taking crazy pills I guess. Two games isn’t really much, but I’ll tell you what, I’m still not buying Ray Rice, even in the case of a discount. At the end of the day, I just don’t think he’s a very good running back and I don’t think the Ravens offense is a particularly good one. And while I still like Lorenzo Taliaferro as a sleeper to keep an eye on, Rice remains the de facto back in Baltimore, and that means the rest of the depth chart should basically be ignored in standard leagues.