Donkey Teeth and B_Don reconvene to discuss DT’s dynasty RB ranks. Of course, any discussion with Donkey about running backs has to include some Kerryon Johnson.

The guys are split on a number of running backs including Joe Mixon, Melvin Gordon, and Austin Ekeler. DT gives us his case for Jonathan Taylor as a top 10 dynasty RB, and why he hates Marlon Mack.

We take a look at the Cardinals situation for this year and beyond before jumping into some late round guys and 2019 rookies that people may be ready to throw into the garbage pile. Stay tuned for the end as DT has an exciting announcement (that he almost forgot) about a new platform coming to Razzball Football! 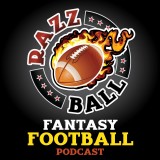