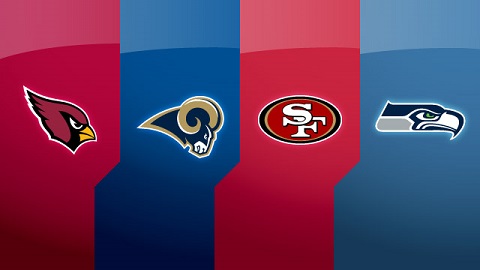 Some of the pros in this industry put out division previews, and over here at Razzball, we are no different. I will try and hit as many player names as possible that are relevant to your upcoming drafts. This is my first article for this site and I’m excited to be here. Let me tell you a little bit about myself… Sorry to go into so much detail. Sometimes I can’t stop babbling.

We are going to start with the NFC West and without going into a ton of detail before we get into individual teams, the West is chalked full of running back talent, but probably the weakest as far as wide receivers go. As far as rankings go, this is a mixed bag in terms of quarterback, and the tight end pool is pretty shallow too. We will go ahead and start with the team that I think will have the most fantasy relevance in this division… 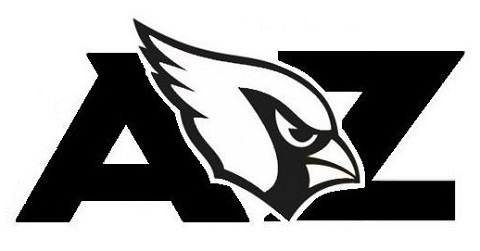 The Cardinals are led by Carson Palmer who is not afraid to chuck and pray. Last year he was able to cut down on interceptions with a career low in seasons where he plays more than 6 games. Why am I even writing about interceptions anyways? Nobody cares about interceptions in fantasy football unless your commissioner is a stickler for offensive efficiency. Palmer is a top half QB1 in 2016 pending health and arguably his most trusted receiver is coming off a career resurgence in 2015. Larry Fitzgerald caught a career high 109 balls last year. People seem to be down on Fitzgerald because he had a dip in production in December last year and also for fear of David Johnson taking away a lot of his production on check-down routes. Well, Larry caught 17 balls for gains of 20 yards or more last season, his highest mark in 4 years.

I’m not a huge Michael Floyd guy, a lot of analysts are calling for this year to be his big break out year. His best season was 2 years ago and he hasn’t went for 850 yards since. That’s like calling for a classic album from a musician or group that’s never really put out a good album. Michael Floyd is like the Big Sean of fantasy football. That brings us to Downtown John Brown. You could put John Brown’s 2015 stat line up against any of T.Y. Hilton’s seasons and you wouldn’t be able to tell the difference. Most people expect Hilton to be a high end WR2 so that says pretty good things about Brown’s potential for 2016, especially with Palmer not being afraid to air it out.

I have David Johnson as my #2 running back because Le’Veon Bell played “new phone, who dis?” with the piss cup collector. David Johnson is a PPR monster who is going to get the bulk of the work in Arizona. Without a full season of work under his belt, Johnson managed 12 touchdowns total and 4.6 yards per carry. His “competition” includes old man Chris Johnson and Andre Ellington, who’s career fell off harder than Aaron Paul’s after Breaking Bad ended.

Besides marrying a washed up pop star mothering a rapper’s kid and that awful poster series, Russell Wilson is primed to have a fantastic 2016. Russell is coming off a fantastic 2nd half of the 2015 season that led to his highest completion percentage by 5 points, 34 touchdowns, and over 4,000 yards through the air. I have him as my #4 quarterback for the 2015 season and a lot of it has to do with Doug Baldwin. Where the hell did Baldwin’s 2015 come from? The 14 touchdowns probably aren’t repeatable, but if he can go on any sort of run that he did in the latter part of the 2015 season you will still get good value of a wide receiver who will still probably be drafted just outside of the top 20 at the position.

Can someone please tell me where all of the Tyler Lockett buzz is coming from? He had 2 games of over 20 fantasy points in a PPR format and one in standard leagues. I get it, he’s fast, but let’s not call him the next Josh Gordon (when he’s on the field) just yet. Speaking of being high, I think I’m higher on Jimmy Graham than most. Patella injuries are the worst, and it’s looking like he is going to miss the start of the season, but I think he can crack the top 10 as far as tight ends go as long as he plays 12-13 games, Jordan Reed does it all the time. Graham has made a career of being a great red zone target who still piles up the yards. One would think the Seahawks can find a way to use him.

Let’s all just settle down and not hop on the Christine Michael train. Don’t give me the but Pete Carroll said.. No.. Coaches are bigger liars than Ryan Lochte having a conversation with his mom. Thomas Rawls is the clear #1 back on a team that is known for having the workhorse mentality. Rawls led all running backs in yards per carry in 2015. There’s a decent chance that he gets hurt, so I’d handcuff him with C.J. Prosise. I’ll take my chances on the talented rookie rather than a 30 for 30 Presents: How Christine Michael Turned It Around After Pissing Away More Chances Than Jon Jones.

I’m not drafting either quarterback from the Rams in 2016, but if I was the last person to take my 2nd quarterback in a 16 team league and I had to take a Ram’s quarterback, it would be Case Keenum in redraft and Jared Goff in keeper/dynasty. Jared Goff isn’t doing himself any favors on Hardknocks to convince me otherwise. Bro, you buy fans for the whole team, not just the offense. And how did you pass classes in college without knowing which direction that the sun rises/sets? Oh, nevermind. In week 15 last year, Keenum put up 21 points in a solid effort against Tampa, but you don’t get to play against that secondary every week. His 2nd highest total was 11. He started 5 games.

It’s not all bad news, Todd Gurley is my #1 running back for 2016. The offense will revolve around him. My only worry that I’ve had about Todd Gurley is that he was often a slow starter in games last year, but he wears defenses down and earns his money with breakaway runs in the 2nd half of games. I’m not really into handcuffing Gurley, but the clear #2 is Benny Cunningham.

Blaine Gabbert is not a bad option if you wait on quarterback in 2 QB leagues. He threw for at least a touchdown in each of his 8 starts last year and threw for 300 yards twice against tough defenses within the division. He’s been talked about as a good fit in a Chip Kelly offense, so there’s that as well. Colin Kaepernick already has a dead arm and hasn’t played a snap in the preseason, so there hasn’t been as much competition as previously believed.

Carlos Hyde will be the center of the 49ers offense. Anyone remember how good he looked on Monday Night Football in week 1 last year? I could go for some more of that. It’s a shame that his season was cut short by injury because he looked like a borderline RB1 when he was on the field. Shaun Draughn is not a good fantasy football option, so I’d rather take high upside back ups at the end of drafts. His highest rushing total as a starter last year was 51 yards on 15 carries.

Could this be the year of Torrey Smith? I wouldn’t put it past him. His break-away speed makes him an asset in a fast paced Chip Kelly offense. The numbers weren’t great last year, but if you mix his 2013 yardage total (1,128) with his 2014 touchdown total (11), that’s a good season. I also like Bruce Ellington in the late rounds of fantasy drafts. He’s been quoted as the most improved player on the team by Alexander Onushko, a 49ers correspondent. Vance McDonald found himself a nice little role with the offense last year after the team departed with Vernon Davis. 30 catches for 326 yards and 3 touchdowns is not bad for a tight end. Look for him to be a decent waiver wire option in 2016.