Welcome back, madames et monsieurs! As the majority of RazzBowl league drafts have wrapped up for the year, I have returned to regale you with the back half of my draft in League 16, and of course, the wine pairings that go with each of my picks!

That’s right! I hope you didn’t think I’d run through this gimmick in just a single article! Ha! Not likely! No no, I plan on driving this Peugeot right off the cliff ala Thelma and Louise, regardless of whether there’s anyone out there who likes it as much as I do–or indeed at all!

As before, I’ll be quoting projection numbers straight from Razzball’s own Rudy Gamble, and you can get those 2021 projections right here. Now, on to the picks!

Tony Pollard isn’t first choice among Dallas Cowboys running backs, nor is Paso Robles first choice among California Cabernet Sauvignons. Those would be Ezekiel Elliott and Napa Valley, respectively. But like Paso Cabs, Pollard has a lot to bring to the table on his own. He’s a situational player in the Dallas offense who will factor in to the running and passing games even if Zeke stays healthy. And, even if the ongoing devastating California wildfires don’t destroy entire vintages worth of Napa Valley Cabernet, Paso juice will still be more than quaffable. But if Zeke goes down? If Napa can’t produce a lick of 2020 Cabernet due to the fires, as has been rumored? Then Tony Pollard will eat, and Paso Robles Cab will… err… drink. Be drunk. You know what I mean.

Tua! Man am I excited about Tua this year. He’s got the pedigree, he’s got the weapons, his division should be a cakewalk, and he gets Houston at home during Brady’s bye week. Definitely happy to get Tua as my QB2 here. As for his wine pairing? Well, what wine is young, exciting, always ready to party (like any young multimillionaire on South Beach), and hard to spell and pronounce? Beaujolais Nouveau, of course! This Gamay wine from the Beaujolais region of eastern France is fermented via carbonic maceration, which–well, it’s too complicated to really explain in this space, but the wine starts fermenting before the grapes are crushed. Just like Tua? Shit, not sure the analogy stretches quite that far, but young/exciting/hard to pronounce works!

Firkser’s not exactly going to light up the world this year, or at least, he certainly isn’t expected to. But he’s my TE2 in a non-TE-Premium league, so I don’t expect much from the 13th round pick. Sounds a lot like Zinfandel wines from California’s vast, flat Central Valley. Places like Lodi make bulk juice, ready to be mixed into any number of unrecognizable, generic combinations. But every once in a while, there’s a Zin from the Central Valley that really, really blows you away. Powerful, bold, tannic, and juicy: that’s a real good Zinfandel. Sutter Home White Zin is also Central Valley Zinfandel… so… y’know. Hopefully Firkser’s a good Old Vine, single vineyard, estate bottled type. Time will tell. 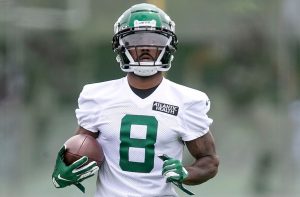 I was pretty stoked on getting Moore this late, to be honest. He isn’t getting the kind of hype that rookie WRs like Ja’Marr Chase and DeVonta Smith are… and that’s probably deserved. But the beauty of Moore is he absolutely has a shot to be the best thing in New York this year. Seriously. Is it likely? No… but it’s possible! Just like the wine I’ve paired him with: Riesling from the Finger Lakes region of upstate New York. Some FL Rieslings I’ve had left a lot to be desired: too sweet without bringing the complexity of the good German and Alsatian sweet Rieslings, or so dry as to almost come off more like a Pinot Grigio, intended for “Real Housewives” all over the eastern seaboard. But every once in a while, a great Riesling emerges from the region. Will Elijah Moore emerge similarly? I’m sure hoping so…

Tyrell Williams has always been second or third fiddle in the offensive orchestras he’s been a part of. But all that might change this year, as he’ll be battling Breshad Perriman and Quintez Cephus for targets in a now-Staffordless Lions passing attack. He could emerge as a star within an admittedly crappy offense. Malbec is one of the five grapes blended together to make Bordeaux, recognized as among the world’s greatest wines. But, it’s one of the three supporting grapes– along with Cabernet Franc and Petit Verdot– and not one of the stars (which are, of course, Merlot and Cabernet Sauvignon). But in Argentina, Malbec has become a star. The grape shines there far more than in its ancestral French home, and wines from Argentina of predominantly Malbec juice and fantastic. So could the move to Detroit do for Williams what the move to Argentina did to Malbec? Fingers crossed.

OK. Bear with me on this one. First, you have to ignore Wilson’s projection. He’s hurt, and he won’t be back until later in the season, after the RazzBowl cutline. So I’ll need to get there without him– frankly, everyone should probably make it past the cutline without counting on the performance of their 16th round pick– but he should be back in November, and if he ends up blowing up (which is an absolute possibility) he could be a huge part of a playoff run in this tournament. He could also do literally nothing at all. Silver Oak Cellars in Napa Valley is known for phenomenal Cabs, and they’ve been doing it since the early 1970s. But if you have a 40-year-old bottle– like the 1981 referenced here– you’ve either got a mindblowing experience on your hands, or you have a bottle of thousand-dollar vinegar. You won’t know until you open it. And we won’t know what Jeff Wilson is this year until he gets out on the field. In November.

After the 2004 film Sideways was a minor hit (but a blockbuster in the niche world of “wine movies”), in which the main character Miles rails against the drinking of Merlot, sales of the wine actually dropped all over the country. No joke. A noticeable drop in Merlot sales was attributed to this one moment in this one film. But Merlot is awesome! In 2019, Damien Williams won more than a few fantasy championships, by gaining 246 total yards and scoring 3 total touchdowns in the last two fantasy-relevant weeks of the season. He sat out 2020 due to coronavirus concerns, and I think folks have developed a huge bias against him because of it. But the way I look at it is that he isn’t hurt or coming off an injury, and the last time he took the field he was tremendous. I’m giving Damien Williams another try, just as folks should give Merlot another try, as well. Miles be damned.

OK. My pick in this turn came up right after the Carson Wentz injury news broke. Sooooo this was definitely like a knee-jerk reaction pick that was almost more like a bad joke taken too far, and in any case, it’s not going to bring me any joy, and if I ever get points from Eason I’m going to regret it. Just like New York’s Arbor Mist “Winery” and their stupid-ass Blackberry Merlot, Strawberry-Pineapple Pink Moscato, Peach Chardonnay, etc. I try not to be a wine snob, but give me a friggin’ break, people. Jacob Eason. Arbor Mist. Don’t bother.

A quick primer on American wine labeling laws: The US is split up into over 200 AVAs or “American Viticultural Areas”, which are the place-names we’re used to seeing on wine, like Napa Valley, Santa Lucia Highlands, Finger Lakes, Willamette Valley, etc. To put that on a label, at least 85% of the juice inside must be from grapes grown in that AVA. To put a county– you’ll often see Sonoma County or Santa Barbara County, for instance– or a state name, at least 75% of the juice must be from grapes from there. And winemakers always put the most specific labeling they can, because specificity has cachet. So if a wine from California says just “California” on it… shit, son, it could be from anywhere in the great Golden State’s 160,000 square miles. You don’t know what it is, the winemaker might not even know what it is. It might be good, it’s probably not great, it could be a disaster. A complete and total crapshoot. Just like Darius Slayton.

I can’t really pick a pairing for All Day, since he’s not even on a team. It’s a blind tasting. There might not even be wine in that glass. But hey, enough teams suffer enough injuries through the preseason, and the Sooner may find himself on a roster sooner rather than later. And Adrian Peterson with a football in his hand is worth much more than a 20th round pick. And if not, I have an easy drop for Week 1 FAAB.

And that’s a wrap. My final RazzBowl roster (until I drop Jacob Eason and Adrian Peterson):

Wish me luck, folks! And cheers!