The first round of the first ever RazzBowl Playoffs is now in the books and the RotoViz crew isn’t playing around. Mike Beers and his three headed monster backfield of Christian McCaffrey, Dalvin Cook and Derrick Henry are striking fear into the butts of the RazzBowl field as they carry a first place lead into the second round of the playoffs. If you’re looking for something to put into your ears, The Beers Man made a special guest appearance on the Razzball Fantasy Football Podcast this past week. Beers’ RotoViz compadre Hasan Rahim is hanging out in second place, with a squad also led by McCaffrey along with Ronald Jones and a slew of wide receivers including Mike Evans, D.J. Moore and Calvin Ridley. 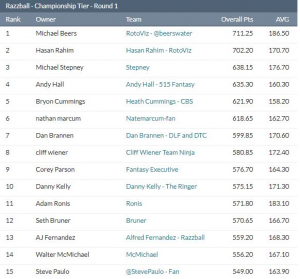 Four fearless fans join 11 industry competitors advancing in the championship bracket: Nathan Marcum, Seth Bruner, Walter McMichael and Steve Paulo. You’re still following, right? Great, because there’s another wrinkle! Of the other 45 teams who were placed in the RazzBowl Wildcard Bracket, the three top scorers from the first round are now leveled up into the RazzBowl Championship Bracket for the second round including a 5th fan contender, Aaron Rieke. The next 20 teams in the wildcard standings are advancing on in the wildcard bracket—this is where you’ll find Team Donkey Teeth—and the bottom 22 in the wildcard standings have been eliminated. 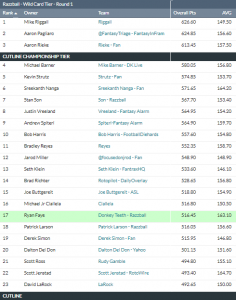 Just like I said from the start, very simple, not at all confusing. So keep your eye on the prize RazzBowl competitors! Speaking of the prize, here’s a quick refresher of what’s at stake, besides the title of best fanatasy footballer in the universe. 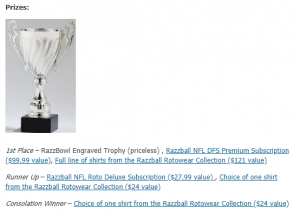 There you have it! Don’t forget to motivate your teams ahead of the biggest week of their lives. I’ve kept all of my players locked together in a small closest with no food or water all week so they aren’t distracted. Also don’t forget to sign up for RazzBowl 2020 now and the inaugural RazzSlam if you’re into baseball!