And by we, I mean Rudy. There were apparently some issues with Yahoo (surprise!), and I’m sure you, the readers who are competing against each other in this year’s Razzball Commentator Leagues, have suffered greatly not knowing what’s going on in our little universe of fantasy football. I’m not quite sure how Rudy’s dark wizardry works, but from what I can gather, there was a problem reversing polarity on the duadnem colliflex inter-valve dilithium imbalance, causing the gravimetric continuum reciprocating-phase matrix to miss-align. AND THAT’S THE WORST BRO. Why? What a silly question. You know as well as I do that the tetryon matrix can’t take that kind of punishment. Too much alternating variance in the asymmetrical interface nutation, NAW WHAT I’M SAYIN’ DAWG? Word. Regardless, the issues have been resolved, and you can rest easy now, knowing that we have the 2014 RCL Master Standings ready to be presented to you. So follow me after the jump to figure out what’s going on in the RCL universe in the fourth week, for the first time. Or the first week in the fourth time. Time the week for the time on the fourth? Uhh. Right.

So apparently the RCL Cracklin’ Brats has not one, but two teams in control of the standings. If this was a car ride, Hubber Guard is driving, McClaine’s Cigarettes called shotgun, and it’s not actually a car they’re in, but probably a train. To be honest, even that’s hard to believe, since I’m not sure trains can carry 400+ people. Maybe if they add extra passenger cars? Do we have train guy around here? Choo choo? Train guy just got a hard on when I said that. CHOO CHOO! (duck). 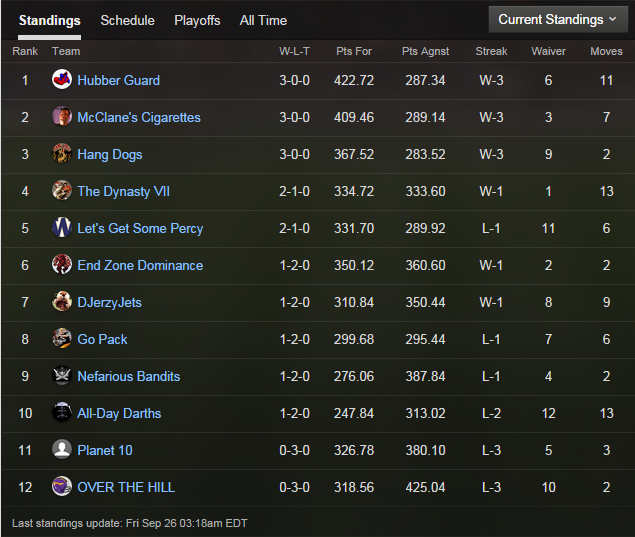 So, I suppose the league that has the top two teams should get a spotlight this week, especially seeing as how I just mentioned trains in a sexual fashion, and we’re all better for it. That’s not really a reason to talk about this league, but the point needed to be established. Hubber Guard should get mad props here for being able to go 3-0 while drafting Adrian Peterson and Julius Thomas. Having Matthew Stafford and Week 3 Jeremy Maclin certainly helped, but I doubt you’ll see many 3-0 teams with the AP-JT combo. I just made that up. Sounds droidish. I should note though, with Pierre Garçon acting very French last night, the team may take a step back come next week’s standings update.

OVER THE HILL (are we really supposed to shout it every time? Is that why you capped it? What about every other time? Let’s find a middle ground.) is 0-3, but it’s not a necessarily bad team. With the likes of DeSean Jackson, Randall Cobb, Marques Colston, LeSean McCoy, and Martellus Bennett, you’d figure one win was possible. But don’t worry, by owning Tony Romo, you’ll rally enough wins to reach a chance at the playoffs with one game to go, and then Romo will throw 3 interceptions to drag your team out of any shot for the championship. So you’ve got that going for you. 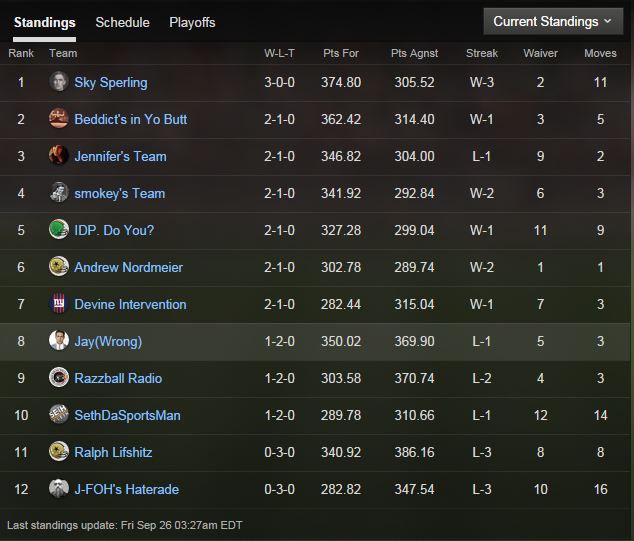 I’ll let the writers do their circlejerk below, but I want to note that J-FOH, bro, you be chugging that haterade son. Take a breath. So what if Larry Donnell was on your bench? He was only worth, if I did the math right, like 18 wins this week. You’re fine.

And speaking of Donnell, he was part of two trades this week that Seth pulled the trigger on. He received Golden Tate and LeSean McCoy from Mr. Chugging Haterade himself, J-FOH, in return for Julian Edelman, Larry Donnell, and Montee Ball. Because of the RCL Universe settings, the veto period (as we can all hope to play with the best league mates in the world, but just in case, we need a safety mechanism to prevent abusing the system) ran through today, so technically J-FOH wasn’t even allowed to start Donnell. And while that was out of his control, it doesn’t make the situation any less tragic and hilarious at the same time.

The other trade was sending Keenan Allen and Doug Martin to some guy named Jay for Michael Floyd and Chris Ivory. Jay getting a Chargers player? WAT? I think both Floyd and Allen are a wash right now, but I like Allen to bounce back a bit more, and Martin vs. Ivory is a classic risky high ceiling vs. stable producer with a ceiling. Pretty even trade in my opinion, but time will be the ultimate judge. And The Rolling Stones told me Time Is On My Side, so yeah, advantage me. No bias here bro.