Hello all! Here are the strategery numbers expanded over the rest of the fantasy football season. They are colorful so that’s neat. So the higher the number the easier the defense against the pass or run. I’d do some analysis here, but I’m on vacation ovah haeer!! 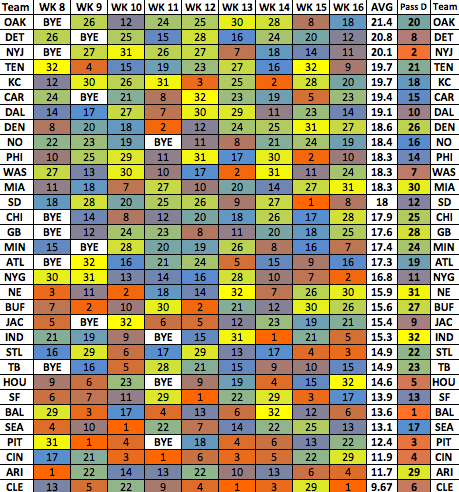 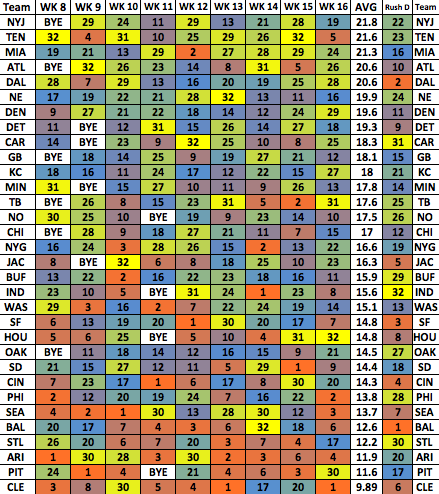 @Doc I have Beanie and just grabbed Alfonso Smith in case he doesn’t go. McFadden, Mike Bush, and Ingram on my bench. I have 1st waiver priority. Do I use it on Deangelo Williams or see what Alfonso can do?

I was offered Arien Foster for either welker or Megatron in a ppr league. I really need an RB so I’ll do the trade but who do you think I should give up?

So, judging from this list… I would be wise to make a run at Daniel Thomas for the playoff run in all of my leagues?

Do you think that this means Shonn Greene might actually have some value? Got him as a throw in on a trade, but looking at this makes me think he might be good towards the end of the season. I’m in a ppr league if that matters. Know he hasn’t caught much…

Also makes me wonder if I can count on Ray Rice to get me to the playoffs, given the brutal schedule wks 10-13

My starting lineup would be:

Hi there, Doc. Thanks for the regular updates. Quick question. Would you trade your Sydney Rice for his Vernon Davis? Or will rice pickup with TJ back under center?

Doctor, I have Brady, Big Ben, and Tebow in a 2QB league. I’m starting Brady and Ben this week, right? Right…???

Doc is on vacation, so while he’s out livin’ the dream I’ll offer some answers to your questions, for what it’s worth.

@Chicago Mike: If Wells is out I’d go with Smith on expected work load alone. Hang on to that #1 priority for a better option later in the season.

@draz: Ugh. I’d hate to give up either, but if I had to choose one it would be Megatron.

@Boog: Yes, but don’t overpay to get him.

@Robert: Sure Greene has value. PPR not as much, but he’s getting 20+ touches a game. Rice has a tough schedule, but he does enough in the passing game to hold big value against any opponent. Have faith in Rice, Rice, baby.

@Eric H.: If you can get Mathews for Rivers, I’d do it. You can afford that trade.

@bert: If anything, I think you’re giving up a little too much. I think VJax/Bradshaw is fair for Sproles/White. I wouldn’t even get Little involved.

@Eng: I’m not Doc, but for what it’s worth I’d make that trade assuming you need a tight end.

@DDT: Doc is on vacation, but for what it’s worth…right!

Thanks Clint, much appreciated bud

Cam Newton vs the Vikings or Tom Brady vs the Steelers? Thanks!