There are a whole lot of numbers below here, but suffice it to say the higher the numbers the worse the defense. These are based on numbers through 5 weeks. Will the Eagles turn their rush D around? Maybe. Will the Patriots stop giving up a million yards per game through the air? Also maybe. So you can’t just take these as fact, but I do think they can help a little in evaluating close trades. I’ve split these up into the rest of the season and weeks 14-15-16, i.e. the Fantasy Playoffs. Take a look see and see what you think.

Pass Defense Rest Of The Season: 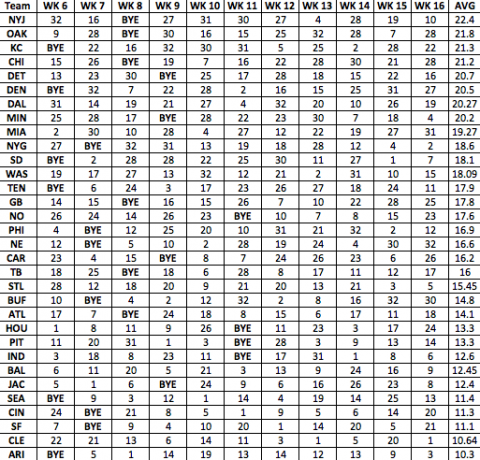 Wow, I sure wish Mark Sanchez was playing better because he has a very nice schedule the rest of the year. These numbers do make me feel better about having him around for spot starts and for my Santonio Holmes hopes to come to fruition . . . On the opposite end of the chart, i.e. the ass-end, the Cardinals passing game, i.e. Kevin Kolb and Larry Fitzgerald, i.e. Tweedle Dee and Larry Fitzgerald have a tough road ahead . . . I can’t say I’m hating Dwayne Bowe‘s schedule. That guy just keeps making me like him . . . It might be time to sell high on A.J. Green after week 8 . . . It sure would be nice if one of those crazy-talented Oakland receivers would start averaging about 10 targets a game because they’ve got some nice matchups . . .

Tim Tebow and Brandon Lloyd might just be the playoff studs this season . . . Curtis Painter and Pierre Garcon maybe not as much . . . I can’t wait to start that Bears receiver when the playoffs come around, you know, that one . . . You might not want to bench Aaron Rodgers come playoff time or his 12 receivers. I know you were thinking about it . . . I’m loving Ryan Fitzpatrick‘s schedule here, but he’s in Buffalo week’s 15 and 16. I’m no meteorologist but mid-December in Buffalo isn’t exactly flip-flop weather . . . I’m really liking Eli Manning‘s schedule until the playoffs hit. If these numbers hold to form he might be a good sell high in a couple months. Including some of his receivers . . . I was high on Tony Romo and the Cowboys passing game coming into the season and these numbers aren’t discouraging me from that. If they can stay healthy they will help your team . . .