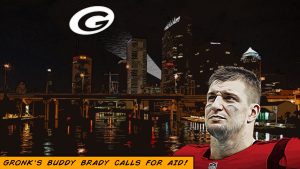 Over the past four weeks Tom Brady has been slowly settling into life in Tampa Bay, scouting retirement communities and getting to know his new Buccaneer teammates. On Monday young tight end O.J. Howard ate Brady’s spinach, arugula and GOAT cheese salad out of the team fridge while complaining about the lack of tomatoes. Howard then violated the quarterback’s 6-foot radius of personal space before coughing without covering his mouth. Enough was enough, it was time for Tom to dust off his trusty Gronk signal and shine the big man’s light into the balmy Florida night sky. And Rob Gronkowski wasted no time in answering the call of his old friend. By Tuesday afternoon Gronkman had been traded from the Patriots with a 7th-round pick in exchange for the the Buccaneers 4th-round pick.

Gronk battled nagging injuries from 2016-2018 missing 13 games over his final three seasons prior to his early-retirement. He also looked quite slimmed down during his 2019 public appearances. That said, you can’t help but root for the big boy, and a year of rest and relaxation likely did his overworked body some good. Off the bat, I’ll pencil him in as my #7 tight end behind Kelce, Kittle, Waller, Ertz, Andrews and Hooper. And I’ll give him an initial projection of 50 receptions for 700 yards and 6 touchdowns with lots of upside (and downside) from there. Anyway, here’s what other news I saw around the league for 2020 fantasy football:

Christian McCaffrey – Lands a monster 4-year 64-million dollar deal. Music to the ears of CMC’s dynasty owners since the 2021 holdout writing was on the wall. It’s a ton of money to pay a running back but with McCaffrey the Panthers also get one of the best wide receivers in the game.

Tom Brady – In his 20-year career has Tommy Boy ever had a stable of weapons quite this impressive? Serious question, I can’t remember what I had for breakfast yesterday much less the Patriots receivers from the year 2000. I think Troy Brown was a player? Either way, even at 42 years old, Brady should be able to sleepwalk into backend QB1 numbers.

Mike Evans – If you hadn’t already soured on Evans after the Brady signing, it’s impossible not to be puckering now with Gronkman swooping in to play hero and steal a handful of touchdowns. Not sure if Evans will even produce back-end WR1 numbers this year.

Chris Godwin – Maybe I’m being naive, but I’m still firm for Godwiener even with Gronkzilla in town. It’s a crowded offense, but the Julian Edelman role should be secure.

O.J. Howard – O.J. was murdering people’s fantasy teams last year and not in the good way. At least now we don’t have to worry about falling for it again, he was going to be tempting as Brady’s go to tight end. There’s a good chance he’s dealt and a change of scenery couldn’t hurt.

Leonard Fournette – I mentioned early in the offseason that I wasn’t buying the Fournette trade rumors, but it’s starting to sound more and more real. If Leo’s out that opens up another juicy landing spot for a rookie running back, stay tuned.

Marqise Lee – Released by the Jaguars as he was set to make 6.25 million this year. There’s a chance the Jags use pick 9 on one of Jeudy, Lamb, Ruggs, or maybe even my boy Denzel Mims.

Matt Breida – Signed a one-year 3.25 million dollar contract with the 49ers, joining Raheem Mostert, Tevin Coleman and Jerick McKinnon in the most crowded backfield in all the land. This has fantasy nightmare written all over it, like the Chicago Bears 2017 draft.

Gronk Signal image brought to you by Coolwhip