Over the course of the off-season we’ll be looking back at some of the rookie seasons from 2012 in the hopes that we can get a feel for what their 2013 fantasy football season holds and whether or not we should target them in drafts.  Today the review subject is Justin Blackmon. 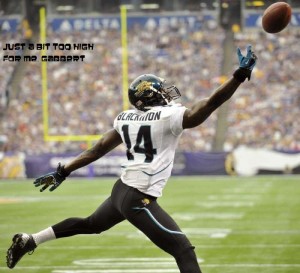 The numbers (nearly 153 fantasy points) and the rank – 29th amongst wide receivers in yahoo PPR leagues – might come as a shock to Blackmon drafters, but definitely not to Blackmon owners.  Why do I separate the two?  Because unless you’re in a keeper league, chances are if you drafted this guy to start the year you didn’t finish the year with him as he gave his draftees the bitter pill.  I mean, he seemed doomed from the start with Gabbert at QB.  I don’t condone drunk driving but I’d probably get a little wrecked in the pre-season too after a few reps with Blaine.  Of course, we’re not here to talk about Blaine and we never will be.  What we are here to talk about is Blackmon’s rookie season of 2012 and how his 2013 fantasy football season might go…

Weeks 1-4: 10 rec, 25 targets, 79 receiving yards, 0 touchdowns, 12.9 total points – Yeah, you dropped him in these first few weeks.  In this span, he managed a goose egg on 4 targets vs Houston and a 1 catch, 7 yard clunker against a very weak secondary in the Colts.  During this span he averaged under 8 ypr and – to the observer – looked very disinterested in this whole ‘football’ thing.

Weeks 5-9: 13 rec, 29 targets, 146 receiving yards, 1 touchdown, 27.1 total points – And here’s where most keeper owners dropped him if they had any chance at the playoffs.  Against a very weak Raiders secondary, he went for another 1 catch, 7 yard performance on 4 targets.  Though his next two games in this sequence were useful, by weeks 8 and 9 most teams are hording backup RBs and keeping only one wide receiver around if any.  Owners have officially blacked out on Blackmon.

Weeks 10-13: 16 receptions, 30 targets, 332 yards, 2 touchdowns, 53.2 total points – It’s amazing what one game can do.  Blackmon’s out of nowhere performance on November 18th against the Texans – which was coincidentally the start of the defensive slide for the Texans that no one saw coming – was only on the deepest fantasy teams at this point.  However, 7 receptions and 236 yards later, Blackmon was the pick up of the week everywhere.  Though he followed with another solid performance against a week Titans defense in week 12, his patented week 13 1 catch flop might’ve been the nail in the fantasy coffin for most owners which is too bad.  It’s during this time period Chad Henne took over for Gabbert and never let go of the reigns, leading to the best 4 week run for the rookie all year.

Weeks 14-17: 25 receptions, 48 targets, 308 yards, 2 touchdowns, 55.3 total points – Though in terms of total points there wasn’t much difference for Blackmon’s numbers, it’s during these final 4 weeks Justin found consistency.  His worst output during these last 4 weeks was a 6 catch, 57 yard performance against a formidable Jets secondary as he went on to post no less than 11 targets in each remaining game.  Blackmon’s FPPG during this span was 13.825, which over a full season would’ve put him as a low end WR2 in PPR leagues.

Conclusion: I liked Blackmon coming out of college and was a little sad to see where he landed and how he started.  Overall, I see a guy who could peak as an Anquan Boldin type.  Strong and athletic but not a wide receiver you expect to be streaking down the sidelines for a 60 yard touchdown.  There are a lot of question marks surrounding the Jaguars moving forward so it’s hard to project for Blackmon with extreme confidence.  Will Chad Henne be starting next year as well?  Will Cecil Shorts come back from late season concussion issues healthy in 2013?  Who will be their running back?  Will there be major changes to the offensive scheme moving forward which negatively or positively affects the players they have?  Will Neil Patrick Harris ever stop being a straight up boss?  All this to say, my projections might be a little weak or a tad too much depending on off-season action but I can’t just blather at you for this long without giving you a little somethin’, somethin’ for 2013 fantasy football…