Over the course of the off-season we’ll be looking back at some of the rookie seasons from 2012 in the hopes that we can get a feel for what their 2013 fantasy football season holds and whether or not we should target them in drafts.  Today the review subject is Ryan Tannehill. 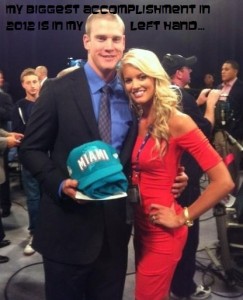 Well what can I say, kids not all of these rookie reviews are gonna be exciting.  However, when you go 8th overall in the 2012 draft the bar gets set high, even if you’re stuck with two wide receivers who average 6’0″ and 195 pounds apiece as your primary targets.  I’m not gonna lie, this following piece might be dryer than your grandma’s box…of homemade prunes!  See, I gotcha leaning there didn’t I?  You and I are just going to have to struggle through this one together.  So let’s take a journey back through Tannehill’s 2012 rookie season and see if it can aide us  in seeing what his 2013 fantasy football season will look like…

Weeks 1-4: 1059 total yards, 56% completion rate, 7 total turnovers, 3 total touchdowns, 53.14 fantasy points – Never like to see a 3:7 touchdown to turnover ratio but the yardage pace would’ve put him at over 4K passing yards on the season, which is encouraging.  Highlight of this 4-game stretch was the 431 yard passing game in Arizona that got the fantasy world aflutter.  Unfortunately, the pace of the other three games – 205 passing yards a game average – were more in line with his end season totals.  Considering 3 of his first 4 games were against teams that gave up very few fantasy points to opposing QBs on the year – Cardinals finished 2nd, Jets finished 6th and the Texans finished 13th against but were much better at the start of the year – it’s hard to say anything bad about this start to his rookie year.

Weeks 5-9: 727 total yards, 63% completion rate, 0 total turnovers, 3 total touchdowns, 41.74 fantasy points – Yet another tough slate of games as 2 of the 4 teams faced (aforementioned Jets, Bengals finished 5th) ranked high in terms of fantasy points against for opposing QBs.  During this stretch, Tannehill got injured against the Jets, only completing 2 of 5 passes so the drop in numbers aren’t 100% on him with his best yardage game coming the following week against the Colts with 290.  Yeah, I know we’re struggling to find the funny in all of this so I’ll give you a topic and you run with it: Mark Sanchez.

Weeks 10-13: 855 total yards, 55% completion rate, 7 total turnovers, 3 total touchdowns, 47.68 fantasy points – Decidedly a rookie showing he’s a rookie during this stretch.  Faced teams that were beatable through the air – Titans, Bills and Patriots all finished near the bottom in giving up fantasy points to opposing QBs – and returned very little given the setup.  During this stretch he also saw some of his worst yards per completion stats which is a good lead in to talk a bit more about his wide receiving group.  Davone Bess is a possession receiver.  Brian Hartline is a possession receiver.  Anthony Fasano is a former mafia member who is under witness protection as a tight end who forgot to change his name.  Keep all these things in mind when looking over Ryan’s stats.

Weeks 14-17: 864 total yards, 59% completion rate, 3 total turnovers, 5 total touchdowns, 65.3 fantasy points – Easily his best stretch, Tannehill’s lowest FPPG output was 11.2 against the Patriots.  According to yahoo, he was the 14th best QB over the last 4 weeks.  Think that doesn’t mean much?  Andrew Luck was the 16th best QB over that stretch.  Josh Freeman was the 19th best.  These guys finished 9th and 13th, respectively, in our top 20 quarterbacks for 2012 fantasy football season review.  Plus, I’m reviewing a guy that had a 12:13 TD to INT ratio so I’ve gotta give myself some reason to get excited.

Conclusion: Tannehill needed help coming into this off-season and Miami delivered.  Nothing wrong with Hartline or Bess, but neither are top wide receiver material and the Dolphins needed someone who could stretch the field.  The fact that Hartline had over 1,000 yards receiving says more about Tannehill than it does about Hartline, in my opinion, and Wallace should prove that this year.  Tannehill finished with a 6.81 yards per attempt average on the year, which isn’t necessarily bad for fantasy players – Stafford finished with a 6.83 – but he also only attempted 1 more pass than Christian Ponder for the season with 484, good for 20th best.  It was clear that the Dolphins kept the training wheels on Ryan for most of the season and even his best stretch wasn’t all that inspiring.  Overall, with the signing of both Mike Wallace and Dustin Keller, Tannehill becomes intriguing in my mind.  His 211 rushing yards finished 10th best among quarterbacks on the season, something that many probably don’t think about when considering his career in college (he had 306 rushing yards at Texas A&M in 2011).  Seeing as he was the 4th best rookie QB in 2012, he’s going to fly under the radar for 2013 fantasy drafts most likely.  At this point, if I’m picking up a backup QB in a 1QB league, Tannehill is my target and he’s definitely on my team in 2QB leagues.  This will probably be the last time Tannehill will go cheaply in drafts.  Enjoy it.