Over the course of the off-season we’ll be looking back at some of the rookie seasons from 2012 in the hopes that we can get a feel for what their 2013 fantasy football season holds and whether or not we should target them in drafts.  Today the review subject is Vick Ballard. 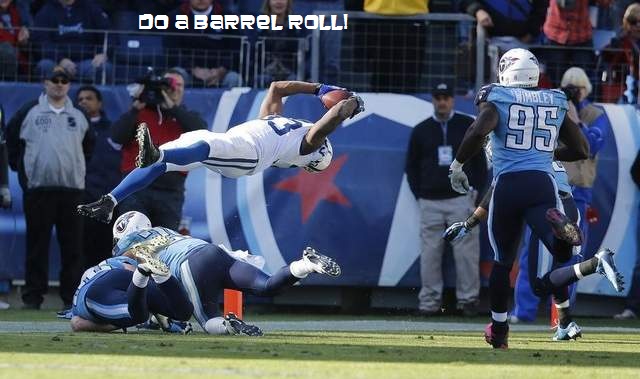 First off, the above image?  One of my favorites from the fantasy football season in 2012.  Wanna see it in gif action?  Well here is your Vick Ballard impersonation of a flying Wallenda.  You’re welcome.  So what’s there to like about a guy whose last name makes you think of frizzy 80’s hair and bic lighters getting waved in the air as you sing to ‘Heaven Isn’t Too Far Away’ you ask?  Well, that’s why we’re here of course and I’m not going to give you the goods right after a pic and one paragraph.  Nay, you’re gonna have stick around for a bit to find out.  So follow me as we break down Vick’s rookie year to see what we should come to expect from him for 2013 fantasy football…

Weeks 1-4: 46 yards, 22 touches, 2 targets, 0 touchdowns, 5.1 total points – Yeah, there’s really not much to talk about here of course.  His high in touches in the first 4 weeks of the season came in week 5 against the Packers with a whopping 7 which was a third of his overall touches during that span.  During this time, Donald Brown got lead back treatment and averaged a little under 16 touches per game and made it seem like we probably wouldn’t be talking about Vick at all for 2012.

Weeks 4-8: 314 yards, 63 touches, 11 targets, 1 touchdown, 40.9 total points – Halfway through the week, the fantasy sports world was told Donald Brown got hurt on the last play of the Packers game and had torn knee cartilage and would miss the game vs the Jets.  The Jets had a very porous rush defense for most of 2012 so the rush was on to pick up Vick for the week.  To say the results coupled with the touches – 42 total yards on 10 touches and 0 TDs – was underwhelming would be an understatement.  Of course, he went on to score about 10 a game over the next three and is also where he scored that touchdown above.

Weeks 9-13: 241 yards, 56 touches, 8 targets, 1 touchdown, 33.1 total points – During this stretch, we got to learn just how little the coaching staff seemed to trust Ballard in and around the redzone and also marked the return of Donald Brown.  Not a great combo for fantasy purposes but all things considered, he still tallied flex-worthy stats.  This would be the last stretch of games that Vick would have to contend with touches from Brown as he would go on the IR for the final 4 games of the year.

Weeks 14-17: 365 yards, 87 touches, 6 targets, 1 touchdown, 44 total points – Now as I previously mentioned, Donald Brown was out so Ballard had a chance to show his mettle during this stretch.  Well, at least he had a shot outside of the redzone.  Even when Brown went out, the Colts refused to let him get the ball at goal to go.  After Brown’s injury, the Colts signed Mewelde Moore for what seemed like running back depth.  Instead, we got to watch in horror as the Colts drove the ball down the field on Houston in week 15 as Moore got most of the snaps on the third drive of the game.  Vick already had 23 rushing yards on 5 carries by this drive but for some reason, Moore got to run the show.  He promptly fumbled on the 1 and the Colts lost the game.  Meanwhile, Ballard ended with 105 rushing yards on 18 carries.  At the time, Vick was only the second running back to rush for over 100 yards against the Texans on the season.  After that loss, the Colts went on to win their remaining games and Vick touched the ball 49 times during that span.  Coincidence?  I think not.

Conclusion: I like Vick.  I like him for the price he’s most likely going to go at.  He’s never going to win many 40 yard dashes against other defenses but he’s built well and fights for yardage.  It’s the little things that can turn a 1 yard loss into a 2 yard gain and he never stops his legs from churning.  Whether he’s running backwards or forwards, he’s always pushing the ball the right direction.  In fact, some of my favorite runs are watching three guys pile on while Vick Ballard is running backwards for extra yardage.  Overall, I don’t think we have a superstar on our hands but if he can get lead back touches in 2013, he’s going to be mighty valuable, especially if Andrew Luck improves on his own impressive rookie year and some of his 5 rushing touchdowns goes to the RB this time around.  Needless to say, I’m going to be singing a power Ballard for Vick for 2013 Fantasy Football anywhere and everywhere I can.