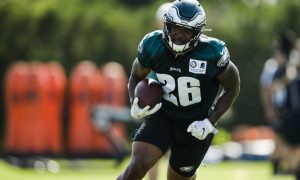 The running backs that are drafted in the first four rounds are not always the running backs that are going to win you your league. Hell, if you’re going to win you’re league, it’s a good idea to draft a few options that could own in your flex spot. We’re looking purely at upside today. You can’t call these players handcuffs because they are already a part of the offense. When you’re already a part of the offense, you just have to start outperforming your counterpart to get more work. Well, most of the time. Let’s not pretend that all of these NFL teams are smart. A lot of teams employ a RBBC because of different skill sets or more run heavy offenses. A lot of these teams go with the hot hand approach and Phillip Lindsay basically was a hot hand for the whole season. Another example would be Derrick Henry at the end of last season. We are looking for the next Phillip Lindsay or the most useful complementary back to gamble on. I want to make it clear that these are gambles. But they are gambles that I am willing to push my own chips in for.

Do you want another GAMBLE that I would push my chips in for? Rudy Gamble’s  NFL ROTO DELUXE subscription is still available for $19.98 for the 2019 season through AUGUST 10TH!

Miles Sanders can do it all and it will be recognized soon enough in his ADP. His ADP is creeping up a little more each week especially after the start of camp. Sanders has moved from the back of the 7th round to the middle of the 7th round in 0.5 PPR drafts. Honestly, with his cutting ability and his pass catching ability, Sanders can be one of those guys that wins your league for you. Every report that has come out of the Eagle’s camp has been very positive for Sanders. He had a great career at Penn State and look for that to continue in his rookie season for Philadelphia. Jordan Howard is going to be in the mix for carries but with Sanders’ pass catching and if he can prove to be the more effective runner, he shouldn’t have an issue taking the larger end of the ratio.

Tarik is going at the end of the 5th round in PPR leagues because there is so much hot air around David Montgomery. It seems unlikely to me that Tarik Cohen loses much work in Matt Nagy’s offense. Cohen ranked in the top 6 for running backs in 2018 for the following categories: receptions, receiving yards, and targets. I realize that David Montgomery will be on the field a lot and he can catch passes too, but Tarik Cohen doesn’t always have to line up behind or alongside the quarterback. Cohen can make plays from the slot as well. I think that the addition of Montgomery is actually helpful for Cohen. There is plenty of room for profit from where Cohen is being drafted.

I have already written about Penny this offseason, but some of you are just joining us. The news is that Chris Carson is holding off Penny in training camp is not surprising and it frankly isn’t an issue at this point. Penny is currently going in the 7th round of PPR leagues and he will have some sort of split with another running back on the team that ranked 2nd in rushing plays last season. I realize that Russ is responsible for some of those rush attempts, but the departure of Mike Davis does not hurt. Penny also finished 16th in true yards per carry which discounts runs over 10 yards and puts an emphasis on consistency. There are a couple more things that work in favor for Penny’s fantasy value. Unfortunately for Chris Carson, he’s historically struggled to stay healthy throughout his career. If Carson does stay healthy, Penny will still be getting a share of the work and if he is able to become the hot hand, he could lead the team in touches. Penny didn’t catch a lot of passes last season, but he has shown in camp that he is a capable weapon in the screen game.

Justin Jackson is currently going in the 13th round and he can be this year’s Phillip Lindsay if Melvin Gordon never shows up. If there isn’t a sign of Melvin when you are drafting in late August, Jackson is the guy that I want on my roster. I believe that Jackson to be a true first and second down back while Austin Ekeler is more of a 3rd down back/pass catcher, despite the advanced stats on his limited carries. I just don’t view Ekeler as a 15-20-touch per game kind of player. We saw an example of this when Ekeler got a heavy workload last season in London. If Gordon does show up, Jackson’s value is gone, but Ekeler’s remains.