Before we get to the strategery make sure you join our FanDuel leagues.  We still need 10 competitors for the last 2 leagues — League Two and League Three.

I sure wish there was a running back in San Diego that we could trust, but there really isn’t.  Whoever is playing the next three games for them will be worth a flex start, but you can’t count on big games even with a nice schedule.  Darren McFadden has the worst matchups for the next three games.  The Cowboys don’t have a horrible schedule against the run after their bout with the Giants.  I could see Tashard Choice throwing a good game or two in there. If Cedric Benson can capitalize in the next two weeks it looks like a perfect time to get something for him. 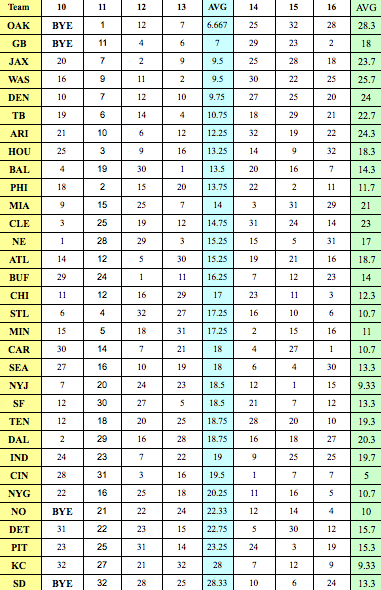 As you can see, Run DMC’s matchups go from worst to first.  I recommended selling him a couple weeks ago if you were in desperate need for wins, and if there is a decent chance that if you don’t win out, you won’t even be playing in those last three games, I could still see trying to get someone with better matchups in the next 4 games.  If you could trust any Redskin running back, they might be able to help you in the playoffs, but I just can’t trust them.  I still like Knowshon Moreno’s playoff schedule.  If he can stay healthy, he can help you done the stretch. LaGarrette Blount has a decent playoff schedule and by then there is a good chance he’ll be getting those 20+ touches a game that we need. 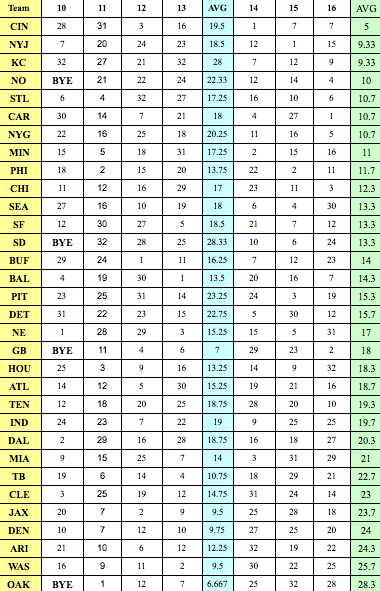