I probably should have found a 49ers highlight to go with the title, but there weren’t any. I’m serious.

What a night of football! Said no one ever. In what was probably a taste of things to come for all future Monday Night Football games, the opening salvo of last night’s double-header extravaganza (the sarcasm is already palpable) of the Steelers versus Washington and the Rams versus the 49ers was all I needed to further convince me that Mondays in general should never exist. In an evening that started with some promise for Washington, they soon returned to their normal NFC East ways, and funny how that return also matched the return of O.G. Cousins. Which also seems like a cool rap name. The Steelers soon took over the game because that’s what happens when a NFL defense lets you do whatever you want. The fact that Washington are 2-15 at home on Monday nights and 5-20 in their last 25 primetime games might have something to do with it too. I’m not sure what, but that’s an astounding stat. And so last night, as that first game winded down, a sadness deep in my heart rose, anticipating what was soon to come. And that was the Rams and 49ers game, a battle that will probably end up determining which team reaches 5-11 and 4-12, respectively. God is good, some say, and I believe this is why I’m an atheist. And yeah, the Steelers and 49ers ended up winning, but I’m pretty sure we all lost for it. And one thing’s for sure, after Keenan Allen died, along with the Chargers morale for the rest of the season, I think we know which is the best California team now: the Raiders. And the Stanford Marching Band.

Antonio Brown – 8 REC, 126 YDS, 15.8 AVG, 2 TD. Listen, I’m not Chuck Noll or Buddy Ryan, but I’m pretty sure single coverage on Antonio Brown isn’t that great of an idea guys. Like, Washington’s new slogan they picked in the offseason “Aggression to the Mean” is just not what they thought it was, and it appears neither can be said of Josh Norman so far.

Kirk Cousins – 30/43, 329 YDS, 7.7 AVG, 2 INT, 72.7 RTG and 1 CAR, 8 YDS. Well, it’s been a while, but this performance sorta makes me miss competent Kirk Cousins, from like almost half of the games last year. Or was it four games? Maybe it was four. Solution: Maybe someone check if Cousins is legally blind? Oh, almost forgot his Grudenism… THIS STEELERS DEFENSE, I CALL EM A FRIDAY NIGHT IN THE OZARKS, BECAUSE THEY’RE HAVING THEIR WAY WITH COUSINS.

Eli Rogers – 6 REC, 59 YDS, 9.8 AVG, 1 TD. THIS GUY ELI ROGERS, I CALL HIM JENNIFER WHITE BECAUSE HE’S NOT FLUSTERED WHEN BALLS BOUNCE IN HIS FACE!

Ben Roethlisberger – 27/37, 300 YDS, 8.1 AVG, 3 TD, 1 INT, 112.4 RTG and 1 CAR, -2 YDS. I know that no one wants to hold onto Ben’s Balls, but that’s no excuse for not securing any of those potential turnovers that he threw in the first half (including the one he actually did)… Actually, you think he was just like: “The Ben just want to watch cheerweeders bouncy bounce, so he throw to other team. HARF HARF.” I think that’s accurate.

Torrey Smith – 2 REC, 13 YDS, 6.5 AVG. I think if you described Chip Kelly’s offense on the field as vertical, as opposed to horizontal, I’d probably say that you were being generous. 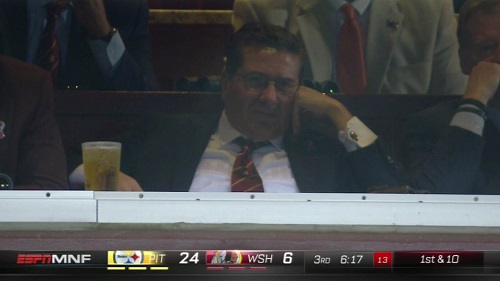 This picture of miserable Dan Snyder from last night is soooo good.

I’ve had an interesting perspective of NFL owners, as I’m sure you know, I am, in fact, a Chargers fan (much to my chagrin), and to add to that, I also live in D.C.. I feel like that gives me a special ability to see not just how one sh*tty owner runs things, but two. And I think I know what it would take to be an actual good NFL owner. A good owner would probably stay behind-the-scenes, completely in the background. The only time you would see the owner is if it’s for a fire, a hire, or they want to donate a field to a local high school. That’s. It. Dan Snyder is the antithesis of that concept. Unlike Dean Spanos (who is quite the dumpster fire himself), Snyder’s hands are all over everything. I mean, Joe Gibbs couldn’t even do anything under this owner, and he’s won championships in multiple sports! I could add to the list with the Albert Haynesworth LOL-incident, all the way to his beyond child-like resistance to changing a slur, but let’s be honest, unlike other terrible owners, he’s not exactly close to his deathbed. So I’m pretty sure the District is f*cked for quite a while…

Oh, also, bonus Final Thought, but was Los Angeles ever really that excited to have the Rams back? I’m pretty sure that they still don’t even know…