Quick question: If this game was on in May, would you watch it? To be honest, I wouldn’t just watch it, I’d dissolve it in a spoon and inject it into my left eyeball. But 12 weeks into the season? Yeah, not so much. While I thought the final score would be 7-0 (an insurmountable lead!), the Ravens and Browns match-up did, at least, provide some semblance of what football would look like under normal conditions with normal teams. But anything beyond that descriptor is probably pushing it. Okay, okay, it wasn’t that bad in the second half, but in the end, as the Browns pulled defeat out of the jaws of a possible tie (shown above), I didn’t really know if this game was entertaining, or I had just been reduced into thinking it was mildly interesting. And while most AFC North rivalries carry a bit of, well, national appeal, this one really doesn’t. Sure, Cleveland isn’t too fond of the Ravens, seeing as how their franchise is only three years older, yet they’ve drafted four Hall of Famer’s and a pretty large number of Pro Bowl players, and then, of course, the postseason success. But… that’s pretty much the extent of it. And, well, you know, the whole Art Modell thing. Well, anyways, one thing is for sure, that was certainly peak Browns last night. PEAK.

“See? This is why I don’t want any more Browns here.” – Donald Trump.

Karmar Aiken – 6 REC, 80 YDS, 1 TD. Watching this Ravens offense is like jerking off with your left hand, the end result feels good, but you’re always doubting if you’re ever going to get there.

Duke Johnson Jr. – 7 CAR, 27 YDS and 5 REC, 23 YDS. Are players that get drafted by Cleveland eligible for parole after two years, or do they have to serve out their entire rookie contract regardless of good behavior? I’m only asking for Duke’s sake.

Josh McCown – 21/38, 212 YDS, 1 TD and 2 CAR, 12 YDS. Every time I see Josh McCown play quarterback, I remember the season he replaced an injured Jay Cutler and how ready people were to dump Cutler to keep him. That is why Bears fans deserve no good things. 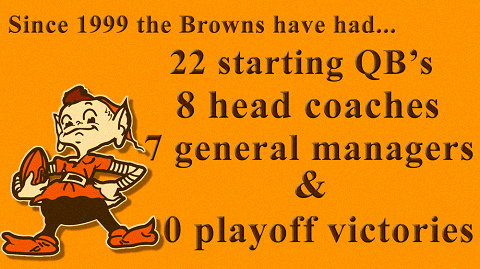 Are the ticket takers for Browns games called “Harvesters of Sorrow?”