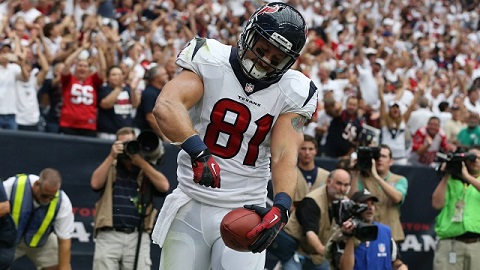 Hey guys, just finished pouring some maple syrup on my eggs and pancakes. I hope you all can stomach the sweetness my posts have to offer. I apologize for my absence last week as my laptop kept dying over and over and was unusable. The blue screen of death and Lenovo terrorized me. Straight to the good stuff: A post about a player that could be of tremendous value past pick 100. Who is that you say? Well it is the Bronco’s TE, Mr. Owen Daniels.

Peyton Manning’s tight ends have been touchdown machines over the years. This is where dreams are no longer dreams, they become reality. In the last 7 years, all of Manning’s TE’s have been fantasy relevant. Looking at 2007 and onward, Peyton’s main TE’s were Dallas Clark, Jacob Tamme and Julius Thomas. From 2007-2009, a healthy Clark averaged just over 78 receptions, 856 yards and 9 touchdowns. Two of those years Clark was at double digit TD’s. In 2010 and 2012 when Tamme, an extremely average pass catcher, was the starting TE for Peyton, he averaged 59.5 Rec, 593 yds and 3 TD’s. Julius Thomas, the last 2 years, averaged 54 rec, 638.5 yds and 12 tds in injury plagued seasons.

Let’s analyze this data now. Tamme, a very mediocre receiver, was able to be useful, more so in PPR leagues, as Manning’s primary TE. He is the floor in our situation. Manning loves to target his TE’s in the red zone as seen by Thomas and Clark’s touchdowns over the years. Manning has always had top receivers on the teams he’s played for, yet is still able to get his TE’s their touches. I feel very strongly, barring injury, that Daniels can be sneaky good and cost very little on draft day.

The only TE’s I feel that are worth a draft spot in the top 8 rounds are Gronk, Graham, Olsen, Kelce, Bennett and Witten. I’m not saying here that Daniels the top TE this year or that you’ll want to name your team after him next year with some terrible pun using his name, but he can a be great flier if you get an extra WR or RB early on and still want a very useable TE.

The main knock on Daniels is his injury history. I would consider drafting a 2nd TE even later in the draft as insureance. Daniels was great in Houston while he was healthy. Throughout his career, per 16 game season, he was at 60 catches just over 700 yards and roughly 4 TD’s. Now thats with Matt Schaub, Ryan Fitzpatrick and Joe Flacco throwing the ball. One of the main points of this article is that he is now PEYTON MANNING’S TE1.

Lastly, Gary Kubiak was Daniels coach throughout most of his career in Houston. They reunite now in the Peyton Manning era and this is only good news. In my other article I wrote about how much a coach can help a player out. I feel the same way here as Daniels had been a top target in Kubiaks system behind Andre Johnson. I knock on wood every time someone speaks Daniels name as a safety precaution.

Go ahead and grab extra depth at WR or RB. Grab a higher tier QB instead of a top TE. Fill your other starting roles with top players. Owens Daniels is here to soothe your soul.