Deja vu is “the phenomenon of having the strong sensation that an event or experience currently being experienced, has already been experienced in the past, whether it has actually happened or not.” The Seattle Seahawks are licking their wounds from a controversy-filled Super Bowl defeat. They dispatched of the NFC with a stout defense and dominant running game. The team was led by arguably the best running back in the game. His name is… Shaun Alexander.

The year is 2006. The Seahawks just lost Super Bowl XL to the Pittsburgh Steelers. There were a host of controversial calls in the game that brought heated discussion from all sides. The 2005 Seahawks were ranked #7 in points/game allowed and boasted the #3 rushing offense at 153.6 yards/game.

Shaun Alexander just completed his fifth consecutive season with 1,000+ yards and double-digit touchdowns. As a reward, the front office signed Alexander to an eight-year, $62 million contract in March of 2006.

Life was good. But then, All-Pro offensive guard Steve Hutchinson left to go to Minnesota. The 2006 season was the beginning of the demise for Alexander. After six seasons of never missing a game, he missed six in 2006. Including the playoffs, Alexander notched 1,812 carries in that magical run. 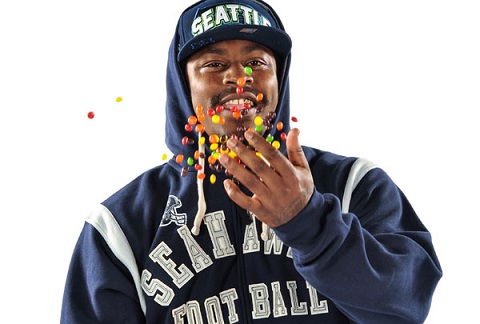 Fast forward to 2015. The Seahawks just lost Super Bowl XLIX to the New England Patriots. The controversy in this game was that the Seahawks chose to pass instead of feed Beastmode at the one-yard line with 26 seconds left in the game.

The 2014 Seahawks were ranked #1 in points/game allowed and possessed the #1 rushing offense at 172.6 yards/game.

Marshawn Lynch just completed his fourth consecutive season with 1,000+ yards and double-digit touchdowns. In March of 2015, Lynch agreed to a three-year, $31 million deal.

Then, center Max Unger was traded to the New Orleans Saints. With Unger, Lynch ran for 5.0 ypc. Without Unger, 4.4 ypc.  The first preseason game for the Seahawks in 2015 did not assuage any of the offensive line concerns.

Including the playoffs, since Lynch entered the league in 2007, he’s carried the ball 2,220 times.

Joseph Juan wrote an interesting article in April of 2015 titled: Measuring NFL Running Back Longevity: Falling Off the 1,800-Carry Cliff.

Nothing lasts forever. Can Lynch have another great season in 2015? For sure, but there are definitely some red flags. In my article, Predicting the Top 10 RBs of 2015, data for the past 10 seasons has shown that preseason ADP has only predicted the final top 10 greater than 50% twice. Personally, the similarites (which are probably just coincidences) to Shaun Alexander’s 2005 gives me the heebie jeebies. I would not be in the least bit surprised if Lynch does not return first round value in 2015.