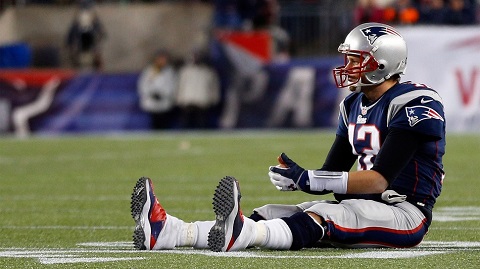 Just in time for tonight’s prime time festivities, there are reports surfacing like leaky submarines (stay with me here) that “tension” exists between Tom Brady and the New England Patriots. If by tension you mean “sh*tty quarterback play”, then yes, I can see that.

Two sources told ESPN that former rookie quarterback Jimmy Garoppolo was drafted as Brady’s successor and the move could happen “sooner than later.” No source suggested that “sooner” would mean a change during the 2014 season.

So the question here is, what the heck does “soon” mean then? Soon to me is, like, soon. Not 365 days from now. Let’s figure out what these words actually mean before using them, yes?

Cincinnati, who could arguably be one of the best teams so far, brings in a well-balanced offensive attack, despite all the gingerness, not to mention a physical defense that has helped generated the only undefeated team in the AFC. Then again, the Bengals have a propensity to lay down in meaningful games, but lucky for them, this isn’t the playoffs.

Note: I’ll be doing DC Brau’s The Public™ Pale Ale for the beer portion, and Jameson for the shots portion.

A.J. Green does something that proves Andy Dalton would have been a terrible quarterback if he didn’t exist.

Someone calls the Bengals defense “underrated”.

Whenver Tom Brady does something bad, Al or Chris brings up Logan Mankins. Scratch that, whenever they claim it’s not Brady’s fault. That should cover you for the night.

Bengals – 6, for how many Bengals stripes there are on their helmets. Is it six? FACT: I don’t care.

Patriots – 5… how many minutes until Rob Gronkowski gets injured.