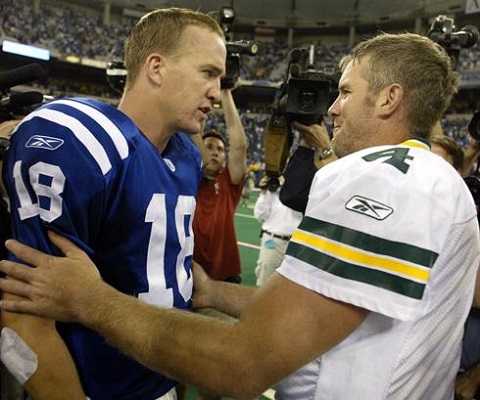 If I could describe this game in two words, they would be: Brett Favre. Or, as some pronounce it: Brett Fahhhhhhrvve. And if I could describe this game with more than two words, it would just be Brett Favre typed out a bunch of times. You should actually thank me, as I’m preparing you mentally for what will be a barrage of Peyton Manning/Brett Favre comparisons, graphics, anecdotes, and overall jaw stretching for those two quarterbacks during Sunday Night Football. If you were buried under a rock all weekend (which, if you were, maybe stay there?), you should know that Peyton Manning is just two touchdown passes away from matching the aforementioned Brett Favre for the NFL record. In what should be a pretty entertaining game, two of the winningest (is that a word?) teams since 2012 will face off, only be to overshadowed by a retired player who sends d*ck pics to ask women out. Why not just stick to trying to sell them your jeans? The 49ers have surprisingly and quietly won three straight after starting the season exactly how Seattle appears to be ending it, including a season-high 432 offensive yards against the Rams. Then again, it was against the Rams… who actually beat Seattle earlier today, so really, I have no idea what to think of the NFC West anymore. It’s weird.

You see any type of Kaepernicking.

You wonder why Jack Del Rio still has a job coaching in the NFL.

Broncos – 258 (The size of Peyton Manning’s forehead, measured in yards.)