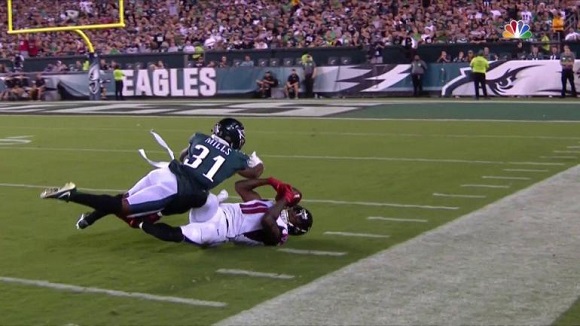 Last night, we kicked off the regular season with…. the opposite of a bang as the Atlanta Falcons visited the Philadelphia Eagles. We have to remember that September football tends to be pretty bad at times. Teams are not in a groove on the offensive side of the ball and it clearly showed last night.

Be sure to check out Rudy’s Depth Chart tool to make sure you have the best roster locked in for Week 1!

One player that looked like he was in mid-season form was Julio Jones. Julio caught 10 passes for 169 yards, but still couldn’t find the end zone. Julio deserves better than Matt Ryan.

Matt Ryan was awful in the red zone. His performance last night has led some to speculate whether he is dealing with some sort of shoulder injury. I would argue that this is who Matt Ryan is. Besides 2016, when has Ryan ever been better than the average starting NFL quarterback? Ryan, for the majority of his career, has looked like he doesn’t know what to do when the pocket is collapsing around him. If you didn’t fall asleep during the first 3 quarters, you might have noticed that Ryan was unable to finish any of the red zone drives through the air, especially when the game was on the line.

It’s not all Ryan’s fault. Steve Sarkisian is an atrocious play caller who doesn’t get the most out of any of his offensive weapons, even Julio Jones. Of course, Julio Jones is going to get double teamed in Eagles territory on a potential game winning drive. You don’t plan for this? An offensive coordinator is not doing his job when only 5 players on his team haul in a catch all game and two of them are running backs. First round draft pick, Calvin Ridley, was not a factor whatsoever and I continue to believe that he won’t be playable at all in fantasy football this season. I’m not trying to overreact, this is just not an offense that supports three valuable wide receivers.

Tevin Coleman looked better than Devonta Freeman last night. Matt Ryan didn’t do Freeman any favors by over throwing him on screen passes or leading him into situations that led to lost yardage. Coleman had the big play through the air and a nice fourth quarter touchdown run. Now we have a question mark with Devonta Freeman’s knee. Owners of both players should monitor this situation closely.

On the Eagle’s side of the ball, things weren’t much…. prettier. I liked what I saw out of Jay Ajayi and his usage. Pretty much his entire value comes from whether or not he will get red zone looks and you can definitely check that box. We all knew that the Eagles were going to play three running backs so there aren’t any surprises.

Nelson Agholor and Zach Ertz were tied with a team lead of 10 targets a piece. Neither had a game that was worth a starting spot on your week 1 roster. Ertz just didn’t play at times last night and Agholor was unable to accumulate much yardage to go along with his 8 catches. It’s going to be a long month in Philly without Carson Wentz under center.

Don’t worry, football will get better. It always does. It’s probably just a good idea to temper your expectations for the next couple of weeks.