Doc’s note: Thanks to Jason (or as long-time Razzballer’s know him, Pork Burn) for taking the time to research and write about kickers.  It’s a thankless job, usually.

Its round 15 of the draft and you’ve filled in most of your roster spots and started on the back-ups. Suddenly the sweaty guy you work with but don’t really like drafts a kicker. It gets worse as the next three players are also of the kicking variety, picked by your girlfriend’s brother, that guy that used to be your friend but now you only talk to when its fantasy season, and the fish you use to get an even number of teams. What do you do now that Hartley, Longwell, and whoever the kicker for the Rams is, have been scooped up? As an initial matter, why are you mad the Rams kicker is gone? – you weren’t going to draft him anyways. Second, why are you playing with these people? Find a real league with people you like. Finally, let them waste the pick on the kicker. You’ve done your homework. You’ve read Razzball Football. You know to only take a kicker with the last pick and even that’s a 50/50 shot.

The truth is that you shouldn’t spend any time analyzing which kicker to draft. Not “any large” amount of time, but any time. That’s right, bold underlined AND italics. I went there. The time you spent wrestling over which kicker to take would have been much better wasted spent reading this site’s opinions about the other positions. Last season Nate Kaeding was the #1 fantasy kicker – good thing they don’t count the postseason – and Tampa Bay’s Connor Barth was the worst.[1] Using the RCL standard scoring Kaeding scored 156 points while Tampa scored 71. A gap of 85 points over a 13 game season averages out to 6.5 points a week between the best and worst kicker. The more realistic spread between the #1 and the #12, or whatever size league you happen to be in, is 2.8 points a week. Yes, there will be weeks you lose by 3 points but generally speaking this differential isn’t enough to obsess about.

If that didn’t convince you to stop reading this post and go do something else you must be expecting some sort of analysis. Jerk. Awwww, don’t make that face, I was only playing. Here, here’s some kicker analysis to make you feel better. Actually, this piece came about because I had wondered for some time if crappy teams had better fantasy kickers, not because I needed something to bribe you with if I made fun of you. The hypothesis was their drives would stall out more often than the better teams and they would kick more field goals. To test that we listed the 2009 teams by total kicking points and rank, offensive rank, offensive touchdowns, and defensive rank. The defensive rank came about as an off-shoot of the original theory: maybe if a team had a really good defense and a crappy offense (J-E-T-S!!) they would have more field goals because they wound up with better field position from stopping teams but couldn’t seal the deal. The numbers don’t exactly support that theory, but they don’t undermine it entirely. 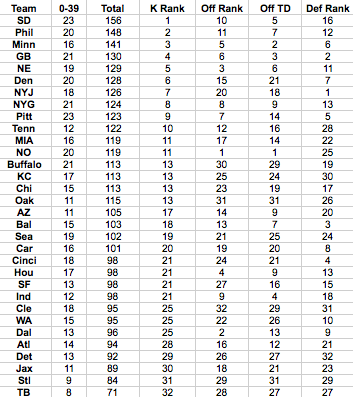 Four of the top five kicking teams had offenses ranked between five and eleven in the NFL. The fifth was New England and its third best offense. Controlling for actual TDs scored clears up the picture somewhat, as these five teams ranged from the 2nd to 7th. The Defensive rank played a much smaller role in predicting kicking performance, probably because the number of times the defensive group gets the ball in field goal range for its offense is so small. The Saints and their top-rated offense (both by yards and TDs) were 11th in kicking points, perhaps due to its 25th ranked defense. By contrast, the Broncos had the 6th ranked kicker but were 15th in offensive yards and 21st in TDs but had the 7th best defense. To really make this confusing, the gap between the Saints at 11 and Broncos at 6 was a total of 9 points.[2]

What does this prove other than I can write a really confusing paragraph about a topic probably nobody cares about? It proves that trying to turn drafting a kicker into an art is a lot like shooting heroin. You may be right once or twice on accident but after that you are going to waste a lot of time and energy chasing the dragon while your family and friends notice drastic weight loss, track marks, and the fact that you stole their TV to support your habit. Don’t go down that road, friend, just remember its only 2.8 points a week you are trying to eke out.

[1] For the sticklers out there, there were two FGs made by the Bucs that Barth was not responsible for, but for the sake of this exercise we are treating TB’s FG points as Barth’s and vice versa.

[2] Yes, this is a small sample size and to truly test for correlation one would have to do multiple years. Knock yourself out. It is boring and tedious and completely pointless. Do you really want to prove me wrong that badly? Suit yourself.