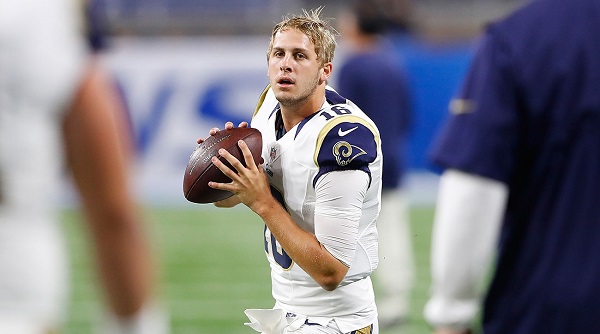 If making week 1 picks is difficult because you don’t have any real in-season data from which to make your predictions, week 2 is nigh impossible because you have some fluke games like the Bengals being shutout in week 1 only to lay another turd on Thursday night against the Texans. The same Texans who in week 1 only scored 7 points against the first place Jaguars! What’s a fantasy football prognosticator to do?!

Philip Rivers, LAC, (18% start): Yes, I know he was my quarterback waiver add of the week as well, but I need to double-down to make sure I have your attention! In 2016 the Dolphins were 6th in passing TD’s allowed and with bountiful, healthy weapons at his disposal Rivers should feast on a young Miami secondary that hasn’t played a game yet this season.

Jared Goff, LAR, (0.8%): Year 2 is when you really get to see if your young QB is the good stuff. If week 1 is indication — the Goff is the good stoff. He had a 72% completion rate, 1 TD and 0 interceptions against the exhausted Colts defense. This week he’ll get the Redskins who let another young second-year QB, Carson Wentz, score 18.9 fantasy points against them in week 1. Goff-or it.

Marcus Mariota, TEN, (46.5% starting): Y’all are gonna kill me for this one but this Jacksonville Jaguars defense is better than anyone wants to admit they are. In 2016 they allowed the 8th fewest fantasy points to opposing QBs. And last week they ruined Tom Savage and his agent’s careers to the tune of 10 team sacks. These Jaguars are hungry and Mariota meat is on the menu.

Kirk Cousins, WAS, (72.2% starting): I have just never been a Cousins believer and I really can’t believe that some of y’all are starting Cousins in more leagues than Cam Newton. I know the ESPN starting percentages are a little wonky (really — someone is starting Tony Romo in .2% of leagues?!) but still — don’t let Cousins fool you especially against the Rams defense. Deeper into the season I’m sure Cousins will be fine, but he looks lost with his receivers right now and you can make better choices.

Terrance West, BAL, (30% starting): Wild, wild west, Terrance West, desperado, rough rider, no you don’t want nada. Yes you do want some of this! If Will Smith made a new album of his family-friendly brand of hip-hop I would buy it fast, quick and in a hurry. We are sans-Woodhead for 2 months so the Ravens are going straight to the wild, wild West. And while the Browns held Le’Veon Bell in check last week they allowed the 2nd most fantasy points to opposing RBs in 2016. If the Ravens hold back Flacco’s throwing for a bit longer West will be the A-number-1 beneficiary.

Eagles Running Backs: LaGarrette Blount, Darren Sproles and even Wendell Smallwood are going to cash in on KC’s defense. The Chiefs allowed the 10th most rushing yards to RBs in 2016 and allowed 3 rushing TDs to Mike Gillislee of the Patriots in Week 1. There is obviously room for the Chiefs to bounce back, but if you’ve got a tough decision to make in your flex for this week — lean back and take a hit of Blount.

Tarik Cohen, CHI, (15.4% started): He’s not the RB1 in Chicago, but Kevin White’s injury leaves the door for Cohen to catch even MORE passes in week 2. He was the highest targeted running back in week 1 with 12 targets, 8 of which he hauled in for 47 yards and 1 TD. Add this to the Bucs being 7th in the NFL in receiving yards allowed to RBs in 2016 and you have a pretty, pretty good flex option at RB.

Carlos Hyde, SF, (81.2% starting): I’ll keep this short and sweet: Hyde is the only player worth focusing on in this 49ers offense. Expect Seahawks coach Pete Carroll’s defensive playbook to just feature a big red X going through Hyde’s face.

Isaiah Crowell, CLE (89.5% starting): Crowell only got you 10.6 fantasy points in week 1 against the Steelers and I think that is his ceiling for his week 2 matchup against an even better defense in the Ravens. Jay, Tehol and Zach all have the Ravens as their #2 ranked defense this week due to rookie QB DeShone Kizer being under center. The Ravens have a veteran, smart defense who will frustrate Kizer and leave Crowell without many touches.

Jeremy Maclin, BAL, (33.8% starting): Browns allowed the 5th most TDs to WRs in 2016. On top of this, Joe Flacco LOVES to face the Browns. In his career Flacco has more TDs and passing yards against the Browns than any other opponent. Finally, the game will be played in Baltimore where Flacco has a career 91.4 QB rating as opposed to his away QB rating of 78.1. Consider this blurb also a recommendation of Joe Flacco as a start ’em QB.

Tyrell Williams, LAC, (7.4% starting): Can’t recommend Philip Rivers without recommending one of his wide-outs. While Keenan Allen is their WR1, Williams did match him with 5 receptions. The Dolphins allowed the 7th most fantasy points to WRs last year. Playing in their first game this season in the Chargers new home stadium I expect Rivers, Allen and Williams to have themselves a day.

T.Y. Hilton, IND, (90.8% starting): It should’ve been a fun battle between Hilton and Patrick Peterson, but unfortunately Hilton doesn’t have a respectable QB to deliver him the ball. Sorry to be so obvious here, but with Luck out Hilton won’t be a viable starter.

Zach Miller, CHI, (0.6% starting): I repeat: Kevin White’s injury leaves a huge hole in the Bears receiving core. Miller was second only to RB Tarik Cohen in targets for the Bears and with no one else really ready to step up you can expect Mike Glennon to look Miller’s way early and often in their passing downs.

Travis Kelce, KC, (100% starting): This same Eagles defense held Washington’s Jordan Reed to only 36 yards on 5 receptions in Week 1. In 2016, the Eagles allowed the fewest receptions and yards to tight ends and allowed the second fewest fantasy points. I know Kelce is one of the top tight ends in the league, but the Eagles know how to handle big tight ends and Kelce might leave with under 10 points this week.

Raiders (16.2% starting): I’m really sorry for being so obvious here guys, but if you own a defense like the Patriots (see below) you might want to grab the Raiders vs. the Jets as your fill in defense of the week. The Jets have no one weapons at any positions at all and may god have mercy on their soul.

Patriots (72.8%): That couldn’t have been the Patriots last week. 42 points allowed?! Somehow I feel like this is some master plan by Bill Belichick to lull everyone into a false sense of security to start doubting his team so their opponents will under-prepare for them on their way to another Super Bowl. This week, however, Drew Brees is coming to town and if there is one thing the Saints can do it is light up some numbers on the scoreboard. The Patriots will win this game, but Drew Brees will still be chucking the ball around the yard putting a dent in the Patriots defensive stats. This could be another higher scorer.

Will Lutz, NO, (71% starting): I like to pair my kickers with reliable high-powered offenses and Lutz fits that bill. Jay has Lutz ranked as his #3 kicker this week so maybe this suggestion is a bit too on the nose, but check your league. Lutz is still owned in less than 80% of leagues and he might end this season as the highest scoring kicker.

Adam Vinatieri, IND, (83.9%): Again, sorry for being so obvious, but a team that isn’t going to be putting points on the board isn’t going to be providing opportunities for their kicker. Last week Vinatieri didn’t help his own case by missing a 38-yard field goal and an extra point attempt. Next week, I promise I’ll have a different kicker listed here but 83.9% starting is still too much for my taste.