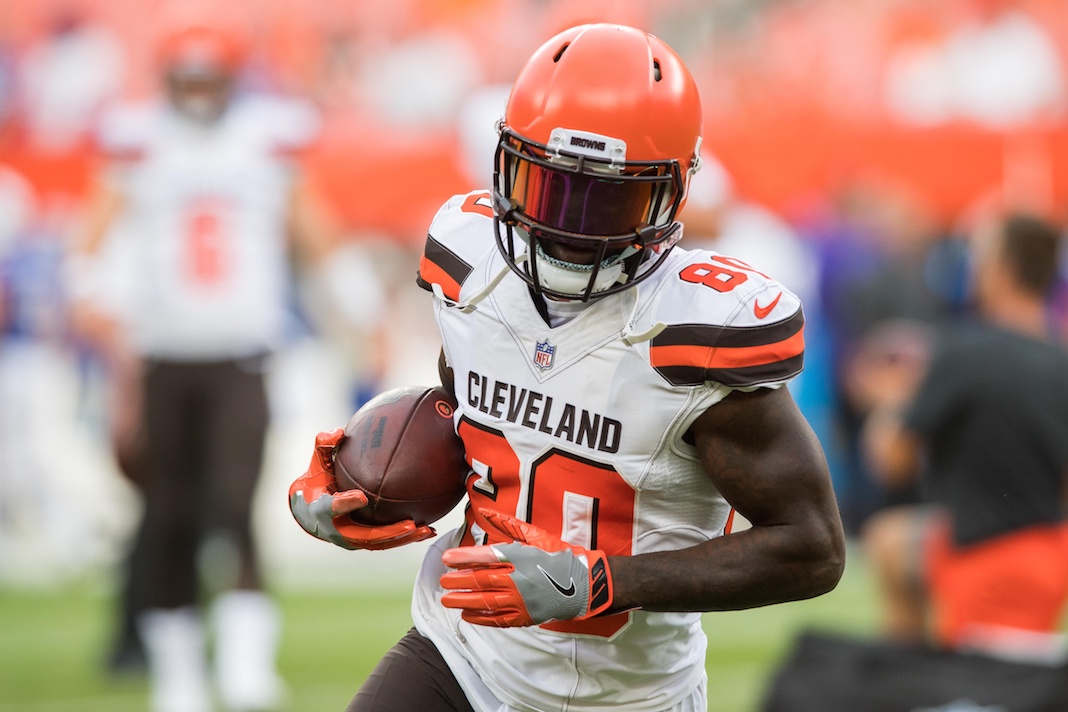 What’s goin’ on everyone, and welcome to Week 2 of the NFL season!

Hopefully you guys all won in every league last week in what was a true Sunday to remember. We had everything: crazy performances from guys like Patrick Mahomes and Tyreek Hill, an absolute shootout in New Orleans, and a tie between the Steelers and Browns. Let’s hope we get some awesome storylines in Week 2!

*Note* – The Week 2 Consensus Rankings can be found here, and be sure to check out Rudy’s projections for this week here!

*Note* – Like last year, I won’t be including the “studs” in any of my “Start” columns. You should always start Aaron Rodgers, Todd Gurley, or Antonio Brown!

While Keenum looked iffy at times in Week 1 against the Seahawks, throwing 3 interceptions, he also had times of pure brilliance, throwing for 329 total yards and 3 TD’s. It was a good first week for the new QB in Denver.

This week should be a whole lot easier for Keenum, especially because he’ll be at home against a Raiders defense that didn’t look that great against the Rams on Monday. Sanders and Thomas have great individual matchups against this secondary, and Keenum

With a Vegas O/U at 53.5, this game between Pittsburgh and Kansas City should be a slugfest, and I like both QB’s in this matchup.

I was really, really wrong about Mahomes in his matchup versus Los Angeles, and if he was able to play that well against last week, then he should be able to do very well against Pittsburgh. Not only are their LB’s not fully equipped to cover Travis Kelce, but Joe Haden is also banged up, which means Hill should be able to thrive as well. I really like Mahomes this week.

If we hear that Big Ben is fully healthy between now and Sunday, you’ve got to start him against this Kansas City defense that allowed Philip Rivers to throw all over them. Both AB and JuJu have great individual matchups, and they are at home, which is always a good sign for Roethlisberger. This should be a high-scoring matchup that he should thrive in.

For those of you that are streaming this week, Smith is a great option not only this week, but he also has some favorable matchups in the upcoming weeks as well. But on Sunday, he’ll face off against a Colts secondary that gave up 243 yards and 2 TD’s to the Bengals just a week ago.

Smith did quite well last week against Arizona, and should do even better this Sunday.

Listen, I like Fitzmagic as much as the next guy, but I can see some major regression this week as he’ll face off against a very tough defense in Philadelphia. It’s a great sign for the Bucs that he was able to do so much damage against the Saints, but he’ll now face off against and Eagles D that has been one of the best units in the NFL over the past two seasons. I don’t think we should automatically plug him in this week based off of Week 1’s result.

Not only is Mariota not fully 100%, but it’s a bad sign for this offense that they lost Delanie Walker for the season, and it should hurt Mariota’s fantasy stock for the season. This Houston defense doesn’t scare me, but I can’t start Mariota with full confidence this week.

Although he only played 35% of the snaps last week against Miami (although it was such a weird game due to the weather), he was productive both on the ground and through the air, which the latter being very important for us in fantasy for the rest of the season, as I have a lot of confidence in Lewis in PPR leagues ROS.

It’s a good matchup for Lewis, as the Texans gave up a lot of production to James White through the air last week, as the Pats back finished with 10 catches for 71 yards and 1 score. Lewis should find some success tomorrow.

Boy, was I wrong about these two backs in Week 1. Well, I didn’t think AD or Thompson could produce in Week 1 on the road in Arizona, and they both did that, with Peterson specifically coming in strong with an incredible 28 touches.

Well it’s a great matchup for both Peterson and Thompson, as for Peterson, he’ll likely get another big workload, and the Colts gave up a whopping 5.2 yards/carry last week, and for Thompson, he’ll likely be a factor as well against a defensive unit that allowed 7 catches to the RB position last week as well. If you’ve got both of these backs, you should start them.

Well, on Friday afternoon we learned that Devonta Freeman will miss this week’s matchup against Carolina, which immediately means that Coleman should be a lock in our lineups from sheer volume alone. But let’s look at some other things as well.

Even with Freeman banged up last Thursday, Coleman played 51% of the offensive snaps, which is always good to see. It’s also a good matchup as the Panthers allowed Zeke to rush for 4.6 yards/carry last week, so Coleman should be able to do some damage. He’ll get work on the ground and through the air, and should be a staple of most lineups if you’ve got him.

It’s a very nasty matchup against Jacksonville, who looked pretty damn good against Saquon Barkley last Sunday before he tore off a long TD run. I can’t give the vote of confidence to either of these backs on the road in Jacksonville, and would look elsewhere if I owned these two players.

I love me some JuJu this week against this banged-up KC secondary in what should be one of the highest-scoring games this week, according to Vegas.

Eric Berry is looking doubtful once again for this matchup, and that should be a good thing in the eyes of any fantasy owner that has a Steelers player on their roster. This secondary was absolutely torched for 49.7 fantasy points allowed to the Chargers receivers last week, and should be in another tough spot on the road in Pittsburgh.

While I would like to see Landry finish higher than a 47% catch rate, I’ll take 15 targets any day of the week, and it just goes to show you that even when it’s raining sideways in Cleveland, Tyrod is doing his best to get the ball to Landry.

Well thankfully for us, he’ll play in a dome this week against a New Orleans secondary that got absolutely demolished by Ryan Fitzpatrick last week. You’ve got to start Juice every week, and this game should be a good one for the wideout.

With 10 targets and 8 catches last week against Atlanta, it was a busy first game for Agholor. He’ll get a much better matchup this week against Tampa Bay, a secondary that was torn apart last week against the Saints, as they gave up 23 total catches for 268 yards and 2 TD’s to opposing wideouts. If you’ve got Agholor this week, I would advise to start him.

While I do like that he received 9 targets last week, he did only catch the ball 3 times, which isn’t that great. Mix in a matchup against shutdown corner Patrick Peterson, and I think that if you’ve got better options, you should roll with them.

Cooper was absolutely horrible against the Rams last Monday, and I don’t think he’ll do that well this week against Denver, a team that he has struggled against in the past.

While I do think that the Patriots will move around their wideouts to get the best possible matchups, it’s still a pretty bad matchup for all Pats wideouts, and if you’ve got better wideouts to go with, I would avoid this matchup for New England on the road.

After Week 1’s impressive performance, George Kittle is looking like he’s going to be a Top-10 TE in PPR formats for the rest of the season. Against the tough Vikings D, Kittle racked in 9 targets and a whopping 18 yards/catch, before some minor injury woes occured. However, if he keeps up that pace, he’ll definitely become a force to be reckoned with at the TE position this year in fantasy, and should be started almost every week.

Despite just starting on 44% of the snaps, and coming in with only 5 targets thanks to his shared time with Jack Doyle, Ebron was still able to find the endzone against Cincinnati last week.

While starting Ebron comes with its risks, it’s a good matchup to plug him in as Washington usually struggles against Tight Ends.

If you need a one-week streaming option, look no further than our man RSJ this week against Los Angeles. As we saw in the first week against Oakland, the Rams boast an incredible secondary that can stifle any and all opposing wideouts, but struggle against TE’s. In fact, the Rams allowed a huge game against Jared Cook on Monday, as he racked in 11 catches for 200 yards.

RSJ started close to 90% of the snaps last week for Arizona, and provides some nice upside if you need a one-week plug-n’-play.

While I don’t think you should necessarily bench Rudolph, unless you have better options, it should be stated that I don’t feel too confident about Rudolph this week against the Packers. While he did play close to 90% of the snaps last week for the Vikings, he only received 2 targets, and it’s a tough matchup as the Packers D only gave up 5 fantasy points to Trey Burton last Sunday. If you’ve got better options, I would start them over Rudolph.

While the rest of the Bucs offense looked like it was in full-swing last week against the Saints, both of their Tight Ends struggled. Brate was catch-less on the day, and Howard caught 2 passes for 54 yards. Not ideal. And it’s not going to get any easier against this Eagles defense that should shut down this Bucs offense. You can’t start either this week.

Like I spoke about earlier, this KC-PIT game should be one of the highest of the week, and Boswell should do quite well in this spot at home.

Like I mentioned last week, it’s Buffalo. That’s all I need to say.

While I do like this spot, and won’t totally hate you for going with Prater, it is tough to trust him after two misses last week.

While it’s tempting to go with the Jets after a great showing on Monday Night, I do think that there are better options to be had, and I would like to see another good week from this defensive unit before giving them my vote of confidence.

Alright guys, that’s my time for today, so thank you so much for reading! Good luck to all of your teams this week, and I’ll be back on Wednesday for my Week 3 rankings! As always, if you have a question or comment, don’t hesitate to leave one below.