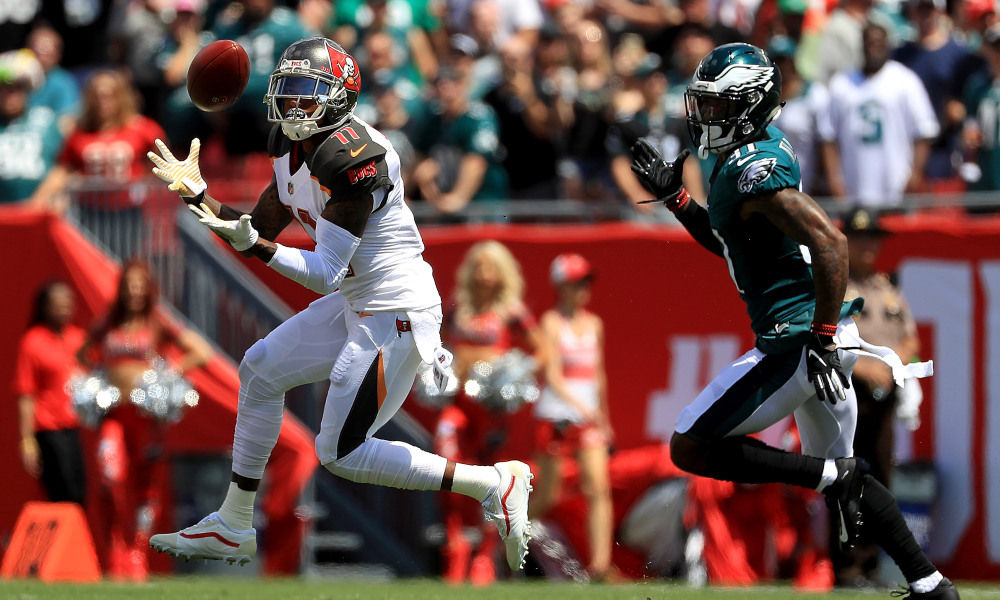 What’s goin’ on everyone, and welcome to Week 3 of the NFL season!

Hopefully you guys all won in every league last Sunday, thanks to some awesome performances from Ben Roethlisberger, Matt Ryan, Matt Breida, Stefon Diggs, and Jesse James of all people! Well, we’ve got what appears to be another awesome slate of games tomorrow, so…

*Note* – My Week 3 Rankings can be found here, and be sure to check out Rudy’s projections for this week here!

While I am a little hesitant to give my support for Big Ben on the road, I do think that he’ll still be able to do some damage on Monday Night.

Even with all of the off-the-field drama these past few days, Big Ben is still averaging about 32 fantasy points per game through these first two weeks, and the rest of the offense is firing on all cylinders, thanks in part to their own talent, and their defense making sure that they throw it on almost every down to get back into the game. The Bucs secondary is getting absolutely torn apart, and Big Ben should be able to do what he wants on Monday.

While Stafford hasn’t looked the greatest at times, I think Stafford should be able to have some success against the Pats defense on Sunday night. While the last prime-time game went horribly for Stafford, this shouldn’t the toughest matchup for him. The Pats secondary didn’t look too hot against Bortles last week, and I’m not sure if they should be able to contain Golladay, Tate or Jones, who, in my opinion, are all better than the Jaguars receivers.

While a lot of his stats don’t pop off the page, it’s really great to see that over the course of two weeks, he’s throwing the ball close to 49 times a game. We’ll take that volume any day of the week, so if you’ve got Stafford, I’d play him over some QB’s this week that have tougher matchups.

As Reid often says, Jimmy GQ is in a prime position this week to tear it up. While a lot of it depends on the availability of Marquise Goodwin, who will likely be a GTD on Sunday, you can’t ask for a better matchup.

Garoppolo will be able to square off against a Chiefs secondary that has given up an average of 37 fantasy points per game to opposing QB’s. Philip Rivers went absolutely off against them in Week 1, and Big Ben threw for 452 yards and 3 TD’s. Thanks to Patrick Mahomes, I don’t think people fully realize how bad this Chiefs defense is, and Garoppolo should be able to do what he wants, even on the road.

As a Carson Wentz owner, I’m starting him in a couple leagues where I didn’t already have a backup QB in place for the first few weeks. However, in one league, where I have Matt Ryan, I will be giving the starting nod to Ryan over Wentz.

I’m as excited as the next guy about Wentz’ return to the football field, but I’m not expecting a whole lot. Not only is his weaponry limited thanks to the injuries of Alshon Jeffery, Mike Wallace and now Darren Sproles out of the backfield. He should be a bit rusty to start, and the Colts secondary did a pretty good job of limiting the Redskins offense last week. I’d look elsewhere unless you absolutely have to start Wentz.

Wilson has only averaged close to 17 fantasy points a game for the first two weeks, which isn’t great for a QB that most took as the second or third gunslinger off the board in fantasy drafts this summer. Last year against the Cowboys, Wilson only scored 15 fantasy points and threw for 4 yards per completion.

This Seahawks O-Line isn’t doing Wilson any favors, and while it’s good that he’ll be at home instead of on the road, I can’t throw my support behind him.

While the Eagles looked pretty bad on the road against the Bucs last week, I still think that this is one of the better units in the NFL. Fitzmagic used his dark magic ways last Sunday, but if we go back to the first week of the season in their matchup against Atlanta, the Eagles D absolutely shut down that offense.

They’ll be back home against a Colts offense that has flashed some upside recently, but with T.Y. Hilton going through some injury woes, and Jack Doyle being ruled OUT completely, I don’t have much confidence that Luck can deliver on Sunday.

We should always jump on the running back or receiver that should see an increased workload thanks to injuries elsewhere on the team, and that’s exactly what we’ve got with both Clement and Latavius Murray this week.

For Clement, he’s looking a huge role this week against Indy thanks to the injuries of Ajayi and Darren Sproles. It’s a good matchup in and of itself, but factor in 20+ touches, and Clement is as close to a must-start as you can get.

Like Clement, Murray is locked into some serious production thanks to the injury of Dalvin Cook. LatMur (that’s what I’m going to call him from now on, so get used to it!) should expect to see 20+ carries against this Bills squad that ranked 30th in run defense DVOA last year, and so far rank 19th this year. Just ask Melvin Gordon, the guy who scored 3 rushing TD’s in one half last week, how the match-up is! Murray is another near-lock for rosters tomorrow.

Thompson is on absolute fire to kick off the season, as he’s averaging close to 32 fantasy points a game through the first two weeks thanks to his successes through the air. I think his hot-streak can continue, as he’ll face a Green Bay defense that has allowed opposing RB’s to have close to 6 catches a game. He’s a great flex play in PPR leagues.

As for AD, he’s also warranted another start, but I’d only really use him in standard scoring leagues. Again, it’s a great matchup for the veteran, as on the ground, the Packers have allowed opposing rushers to run the ball for 4.8 yards a carry. He’s another solid flex play.

While it’s great that he’s averaging close to 18 touches a game through 2 weeks, he’s just simply not doing enough on the ground, and that’s likely due to how well the Bucs are doing with Fitzpatrick through the air. It’s a tough matchup for Barber, as the Steelers have only allowed rushers to operate to the tune of 3.6 yards per carry. I don’t think we can trust Barber this week.

While Lindsay has been one of the hottest rushers through the first two weeks of the NFL season, I don’t think we should force him into our lineups this week. He’ll face a very good Baltimore rush defense on the road, who has not even surrendered a rush TD through the first 2 games. I think we can look elsewhere from the young runner.

While I do like the volume and workload that he’s receiving, he hasn’t been very efficient, only rushing for 3.4 yards per carry. Aaron Jones is coming back from suspension this week, so we don’t truly know how this backfield is going to shake out, but I’m guessing that Jones will have a serious chance to become the lead back. I don’t have any confidence this Williams this week on the road in Washington.

Thielen absolutely exploded last week against the Packers to the tune of 12 catches for 131 yards and 1 TD. He should be able to get right back to work against a very weak Bills secondary that has allowed 4 TD’s in total to opposing WR’s, and rank dead last in pass defense DVOA. Thielen should be one of the best performers of the week.

Thanks to the injury of Greg Olsen, Devin Funchess is the clear-cut #1 option for Cam Newton, outside of Christian McCaffrey, and Cam Newton. Funchess caught 7 of 9 targets last week, but what is even more impressive, was his 93% snap rate. This week, he’ll get a great matchup against a Cincy secondary that gave up a lot of production to the Colts and Ravens these past two weeks.

Through two weeks, DJax is your #1 fantasy WR. He’s been on an absolute tear these first two weeks, averaging close to 31 yards per reception, scoring twice in week one, and once in week two. He’ll get a great matchup this week on Monday Night Football against a Pittsburgh secondary that has given up close to 43 fantasy points a game to opposing WR’s. Jackson is a lock for rosters this week.

It’s not good that he’s already suffering from a hamstring injury, so we’ll see what his availability is for Sunday, but regardless, it’s not a good spot for Fitzgerald. While the matchup is good, this Cardinals offense has been one of the worst in the league for the first two games, so I can’t give Fitzgerald any vote of confidence moving forward.

The fact that Hogan scored twice last week against one of the better secondary units in football, only only 5 targets, is extremely volatile. While the matchup is good, I can’t say for certain that he’ll continue producing with the added weapon in Josh Gordon. Hogan isn’t the worst option this week, but there are plenty of other wideouts that I’ll take over the wideout.

Simply put, Thomas hasn’t been producing like his counterpart in Emmanuel Sanders has been, and it might be only a matter of time before he gets out-produced by Courtland Sutton. It’s not a great matchup for Thomas on the road in Baltimore, so if you’ve got better options, I’d go someplace else.

While Ebron has been completely TD-dependent through the first two weeks, he has played a nice role in this offense, and his target share will only grow thanks to the fact that Jack Doyle will miss this game. He should get a healthy dose of targets this Sunday, and is an excellent play at the position this week.

Kittle will always be in play thanks to his snap count and target share, and with this SF-KC game likely becoming a fast-paced shootout, Kittle should get a boatload of production against this weak KC secondary. Even if Goodwin plays, I like me some Kittle this week.

While it’s good to see that he had a 58% snap count last Thursday against the Ravens, he only warranted 4 targets, so to say that he’s TD-dependent would be an understatement. We need to see more from Eifert before putting him in our lineups.

While James absolutely exploded last week, I think some regression could be heading his way. Big Ben won’t be throwing the ball 60 times every single week, and while I do like the matchup, it’s concerning that the Steelers will get Vance McDonald back, which should eat into the James’ production. I don’t think that we should be forcing him into our lineups based off of one week.

Only has 1 FG on the season, but this game should be an absolute shootout, and Butker should benefit from it.

While it is a tough environment for the Cowboys to be in on the road in Seattle, this offense is just not that scary, and their O-Line is even worse.

While he has been efficient, I wouldn’t start him this week on the road in a tough matchup.

While they have been doing a decent job through these first two weeks, I wouldn’t trust them on the road in a matchup where Alex Smith doesn’t give up many turnovers.

Alright guys, that is all my time for today. Good luck to everyone in Week 3, and I’ll be back on Wednesday for my Week 4 Rankings! As always, if you have a question or comment, don’t hesitate to leave one below!