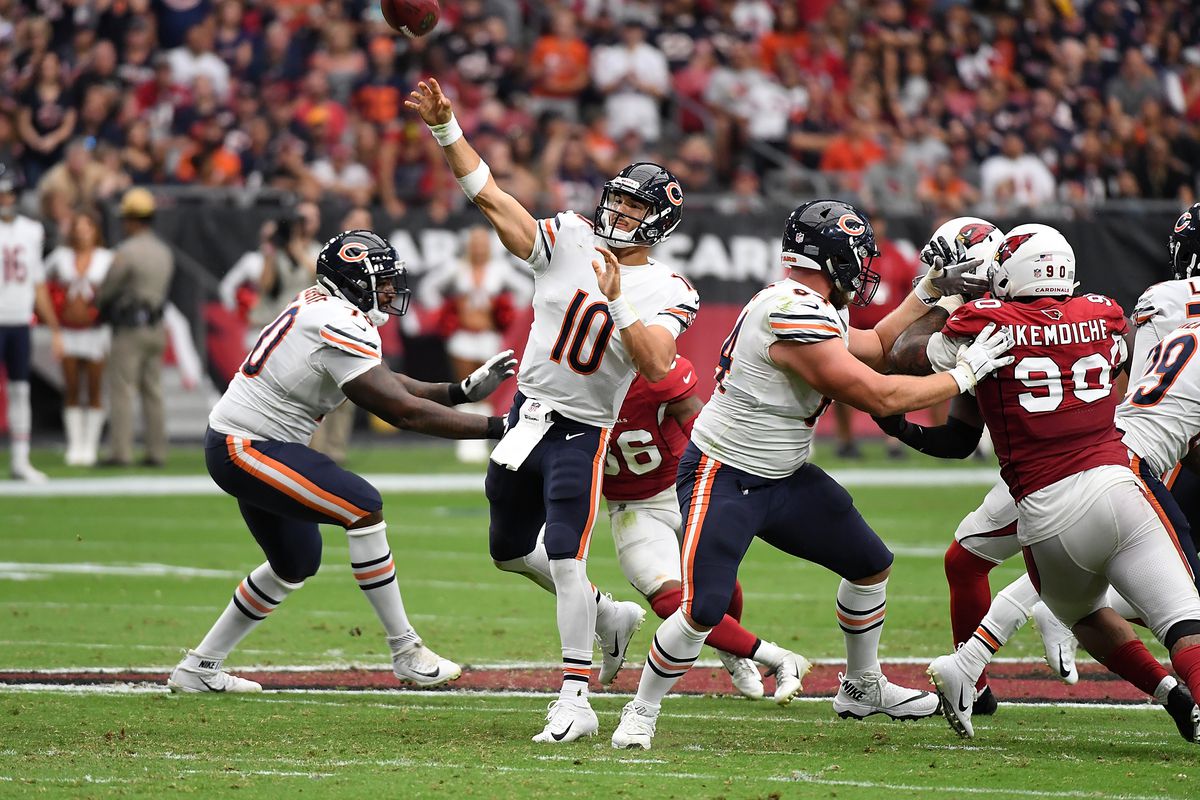 What’s going on everyone, and welcome to another fantastic fall Saturday as we draw closer to another Sunday full of NFL football! Week 4 got off to a great start on Thursday night thanks to the high-powered offenses of the Rams and Vikings, and we should be in for some more exciting football tomorrow.

*Note* – My Week 4 Rankings can be found here, and be sure to check out Rudy’s projections for this week here!

After a fantastic week last Sunday from the veteran, in which he threw for 374 passing yards and 5 TD’s, he gets another great matchup tomorrow against the Cincinnati Bengals. On average, the Bengals are giving up around 28 fantasy points per game, and about 280 passing yards and 2 TD’s to opposing QB’s. Ryan should be able to do what he wants at home, with Julio and Ridley drawing great individual matchups against William Jackson and Dre Kirkpatrick.

On the opposite side against Ryan stands Andy Dalton, who draws a matchup against a secondary that allowed Drew Brees to throw 396 passing yards and 5 total TD’s against them last Sunday. Overall, this Falcons defense is a hot mess, ranking 25th in pass defense DVOA, and 32nd in run defense DVOA. Dalton is an excellent option this week, and I expect all of Dalton, A.J. Green and Tyler Boyd to flourish tomorrow.

Man, Keenum absolutely stunk it up last week against Baltimore. However, I have a lot of confidence in him this week against Kansas City. While the narrative on Monday Night Football should be focused on Patrick Mahomes on the opposite sideline, Keenum still draws an excellent matchup. This KC secondary is absolute “swiss cheese” (as my father would say) right now, and should struggle greatly on the road. They currently rank 30th in pass defense DVOA, and surrender about 32 fantasy points per game to opposing QB’s. Keenum will be able to do what he wants at home. Also, side bold prediction, this is the game Courtland Sutton bursts onto the scene.

It was a good first game back for Wentz, as he threw for about 250 passing yards with 1 TD and 1 INT. Obviously, our expectations are still pretty low as he gets back into prime form, and until he gets there, I think we can still keep him on our benches. It’s also a tough matchup for him on the road, as even though he’ll likely get Alshon Jeffery back, the Titans only allow 19 fantasy points per game to opposing QB’s.

So I’ve gone back and forth about Rodgers this week. First off, I contemplated even listing him here because there aren’t too many QB’s that I would classify as “Sits”. Second, while Rodgers not only looks hurt, this might also be a tough matchup. While we don’t know how last week’s performance against the Vikings means for this 2018 Bills defense, they did look quite good on the road. They could repeat their performance against a hobbled Rodgers, so even if you have him, I’d look for better options.

While Howard had a disappointing game last week against the Cardinals, only amassing 61 yards and 1 TD score, it was very encouraging that he still managed to rack in 26 touches. That volume is crucial for Howard’s ROS value, and it should factor in to a successful fantasy day on Sunday. The Bucs provide a great matchup for Howard, as they have allowed opposing RB’s to score more than 31 fantasy points per game over these past three weeks. As home favorites, this could be a positive game-script for Howard, and should be a staple in all lineups.

Back to the well this week with Gio. Last week, Bernard was highly successful thanks to the volume he received with the absence of fellow Bengals RB Joe Mixon. Mixon is, once again, out this week, so Bernard should be locked in for at least 20 touches. Bernard also gets a great matchup against a Falcons defense that ranks 30th in run defense DVOA. We can’t ask for more than volume+matchup.

While Hyde got off to a rough start last Thursday, he, like many other Browns players, did quite well once Baker Mayfield entered the game. He ended up getting 25 touches when it was all said and done, which is the type of volume you can only hope for. It’s a good matchup as well for Hyde, as he’ll face off against a Raiders defense that ranks 28th in run defense DVOA, as well as allowing a 4.9 yards/carry mark to opposing runners. It’s shaping up to be a productive Sunday for both Hyde and the rest of this Browns offense.

While Collins is locked into some serious volume, thanks to the 22 touches he received last week against Denver, it’s a pretty tough matchup on Sunday Night on the road against this Pittsburgh defense. However, at first look, it doesn’t seem like that’s the case. In fact, the Steelers rank 22nd in run defense DVOA. So why do I think that it’s a tough matchup? Well, on a per-game basis, the Steelers only allow around 15 fantasy points per game to opposing runners thanks to how weak their secondary is. The Steelers have been involved in some crazy shootouts these past few weeks, allowing teams to throw it constantly against this secondary. Many opposing coaches are just flat-out abandoning the run to keep up with this Steelers offense, which lowers the volume that their running backs usually see. I expect this will continue tomorrow night as Vegas has pegged this game as one of the highest O/U’s on the slate.

Despite playing more than 60% of the snaps last week against the Raiders, Drake only rushed the ball for 5 times, and caught it out of the backfield twice. Simply put, we can’t trust Drake in our starting lineups until he gets featured more in this offense, and I’m not sure when that time comes. The one good thing going for Drake is the fact that it’s a good matchup for him against the Pats, who have struggled on all defensive fronts, but even still, it doesn’t seem like he’s getting featured enough in this offense. Until he does, we just can’t start him.

While I do like the volume he’s receiving, averaging close to 15 carries a game, Henry is doing close to nothing with his workload. He’s averaging only 3 yards/carry in addition to his 1 catch on the season in total. It’s also a tough matchup against this Eagles defense that rank 2nd in run defense DVOA, so until he starts producing in good matchups, we can’t start him.

I really like the matchup for Jordan Howard and Tarik Cohen on the ground, and I really like the matchup for Robinson through the air. This Bucs secondary just looks weaker by the week, especially with Chris Conte being out multiple weeks thanks to getting stiff-armed to death (or a PCL tear, same thing). The Tampa Bay secondary allows close to 43 fantasy points per game to opposing WR’s, so Robinson should be in for quite the treat tomorrow.

Like I mentioned earlier with Case Keenum, Sanders draws a great matchup against this Chiefs secondary that looks almost non-existent. While Sanders did struggle last week against the Ravens, only coming through with 5 catches for 38 yards (and one lucky rushing TD, I might add), this should be a great bounceback spot. The Chiefs are currently allowing opposing WR’s to score more than 43 fantasy points, on average, and Sanders should be in line for a huge Monday night.

Sterling Shepard (vs. NO)

When Evan Engram exited last week’s game, Shepard gained additional workload and was the main benefactor of his injury. Well, Engram is out for this game against the Saints, so I think we can expect Shepard to come to play this week. He’ll draw an excellent matchup against a New Orleans secondary that gives up an absurd 62 fantasy points per game to opposing WR’s. While that number is bound to come down a little, it still proves that this secondary is not in a good place, and Shepard should take advantage of that.

While I do like how this Detroit passing game has rebounded after a pretty awful Week 1 showing, I don’t expect their weapons to have a huge day tomorrow on the road in Dallas. This Cowboys secondary is only allowing close to 8 catches a game to opposing wideouts, so I wouldn’t expect much from Tate or Jones, and if you’ve got better options, I’d would go there.

Like I mentioned with Wentz above, this is a pretty tough matchup for the Eagles passing attack on the road in Tennessee. Factor in the likely return of Alshon Jeffery, and I’m not feeling too confident in Agholor this week. I would look elsewhere.

Cooper had a very ugly performance last week against Miami, hauling in only 2 catches for 17 yards. I don’t expect for things to get much easier for the wideout this week against Cleveland, and their top CB Denzel Ward. Currently, this WR/CB matchup as a 0% advantage for Cooper, according to Pro Football Focus, so if you’ve got better options, I wouldn’t keep Cooper in my lineup.

Keep all the Bears in your lineup! This great matchup extends to Burton, as the Bucs have allowed opposing TE’s to score about 21 fantasy points per game. Just look at what Vance McDonald did to them last week! If you’ve got Burton, he’s close to being a must-start.

While a lot of people want to distance themselves from all of the 49ers passing options after the  season-ending injury of Jimmy Garoppolo, I’m the exact opposite when it comes to George Kittle. In fact, this is a great buy-low opportunity. People forget that not only was Kittle actively targeted from C.J. Beathard last year, but they were college roommates! Kittle will continue to rack in these targets, and until he doesn’t, he should be a staple in our lineups.

While McDonald looked great last week against the Bucs, I don’t think we should force him into our lineups. Not only is it a tough matchup against a Ravens team that allows only 8.1 fantasy points per game to opposing TE’s, but Jesse James will continue to eat into his production as long as he’s healthy. McDonald certainly isn’t the worst option out there, but he’s far from the best.

This should be a high-scoring game for the Chargers offense against a depleted 49ers secondary, and Sturgis will benefit a lot from this.

This Colts defense has quitely done way better compared to their unit in 2017, and should do very well against this horrible Houston O-Line.

You can’t really trust Boswell at this point with 3 misses already on the year. I’d look elsewhere.

While the Jets boast an impressive unit, Blake Bortles and the rest of the Jaguars don’t turn the ball over nearly enough for me to force the Jets into my lineup.

Alright guys, that is all my time for today. Good luck to everyone in Week 4, and I’ll be back on Wednesday for my Week 5 Rankings! As always, if you have a question or comment, don’t hesitate to leave one below!