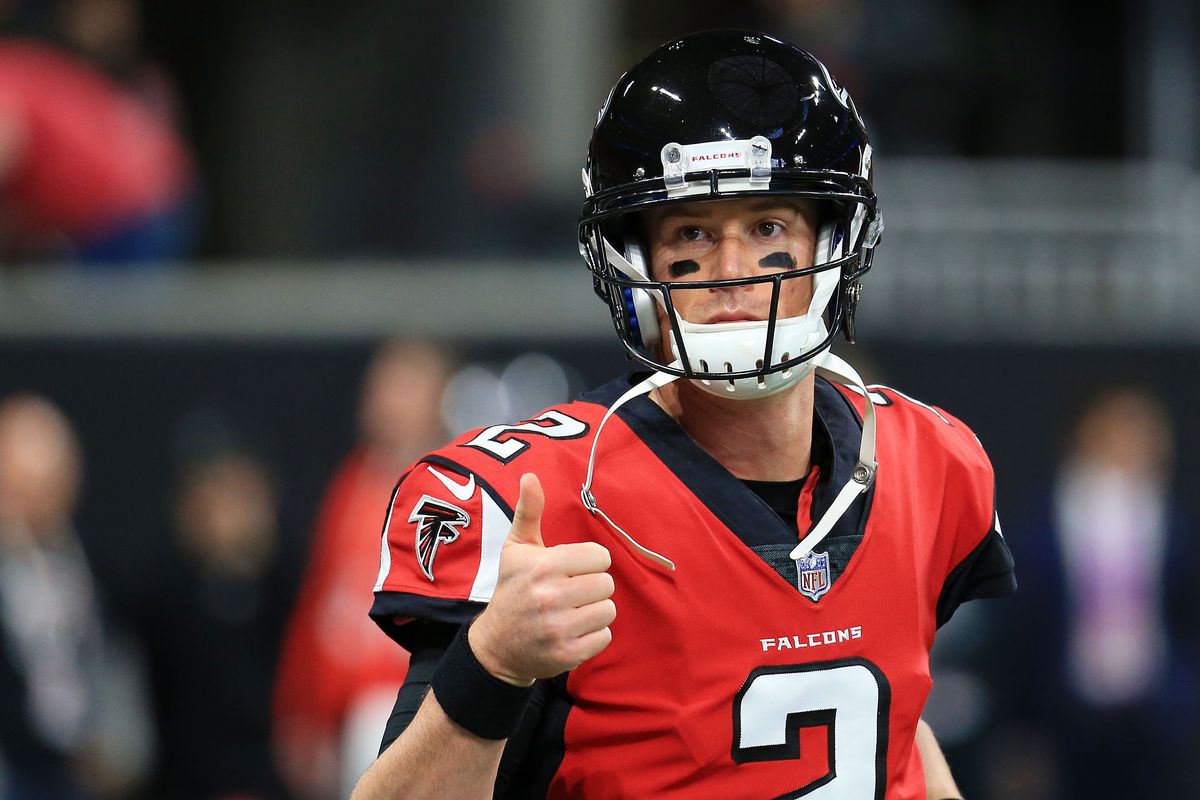 What’s going on everyone, and welcome to another entry in my “Start ‘Em, Sit ‘Em” series! Last week, I had the pleasure of watching the Bears come out and put up 45 quick ones against the Bucs, as I hoped they’d do, so let’s keep the good fortune going!

We’ve got some very interesting games to talk about this week, so without further ado…

*Note* – My Week 5 Rankings can be found here, and be sure to check out Rudy’s projections for this week here!

*Note* – I won’t be including the “studs” in any of my “Start” columns. You should always start Patrick Mahomes, Alvin Kamara, or Odell Beckham Jr.!

After a poor Week 1 showing against the Eagles, Ryan has been nothing short of fantastic over the past few weeks, averaging close to 30 fantasy points per game. He’ll get another great matchup against the Steelers tomorrow. Pittsburgh’s secondary sure has been rough, as the unit gives up close to 31 fantasy points per game to opposing QB’s. Both Julio and Calvin Ridley (more on him later) draw great individual matchups, and Ryan should have another strong showing.

The 14-year veteran has had another solid start to a season, and draws a good matchup at home against the familiar Raiders. Through 4 weeks, Rivers has already passed 1,000 passing yards, with 11 TD’s and only 2 turnovers. He’ll draw a Raiders secondary that ranks 24th in pass defense DVOA and have given up close to 23 fantasy points per game to opposing QB’s. Rivers knows how to attack this secondary, and should be in line for a great game.

If you need a quality streaming option this week, look no further than our man Blake Bortles. While it’s always frustrating starting the Jaguars QB, as he tends to let his defense and running back do the talking, it’s as good of a matchup as any, as the Chiefs defense ranks 30th in pass defense DVOA, giving up close to 28 fantasy points per game to opposing QB’s. If you need a one-week fix, I’d suggest Bortles.

While Rodgers himself got off the injury report, which is a great sign, it’s the rest of the report that’s a bit troubling. Both Davante Adams and Geronimo Allison have landed on the report with Adams suffering from a calf injury and Allison suffering from a concussion, Rodgers might have a very weak receiving corps with Randall Cobb already being ruled out. Shockingly, the Lions defense has only allowed about 18 fantasy points per game to opposing QB’s, and with the injuries, Rodgers has some serious downside. If you’ve got better options, I’d look elsewhere.

With Jimmy Smith returning this week, this Ravens secondary will only get tougher. Through the first four weeks, Baltimore has ranked 5th and 4th in run and pass defense DVOA, and has only allowed about 17 fantasy points per game to opposing QB’s. It’s a very tough matchup for Baker Mayfield, so I wouldn’t force him into any of our lineups this week.

You know the drill. When Fournette is out, Yeldon becomes an immediate lock in our lineups, and we can feel even better about the scenario if he’s got a good matchup. Well ladies and gents, we’ve got both. Fournette has already been ruled out this week, so not only will Yeldon be locked into a nice workload, he’s also got a fantastic matchup against the Chiefs. While he is on the road, Kansas City ranks 32nd in rush defense DVOA, and has allowed close to 32 fantasy points per game to opposing RB’s (and 8 catches per game). Yeldon has tremendous upside this week.

At first glance, Thompson seems to be drawing a horrible matchup against the Saints defense. New Orleans currently ranks 1st in rush defense DVOA, and through 4 weeks, has only given up 3.0 yards per carry to opposing RB’s. However, that’s exactly the reason why I like Thompson so much. While I do respect the #RevengeGame for AP (more on him below), I think he’s going to struggle in this spot. However, the rest of the Saints defense struggles against the pass, which is where Thompson operates. He’s got some very nice appeal in PPR leagues where he should be active as the check-down option for Alex Smith tomorrow. It’s going to be a Chris Thompson day for Washington.

Mark Ingram (vs. WAS)

He’s back, folks! After serving a 4-game suspension for PED’s, Mark Ingram will officially return to NFL action on Monday Night. While Alvin Kamara has been absolutely tearing it up lately, the Sean Payton and this staff has said multiple times that they will run the ball similarly to last season with both runners. Ingram will get his, and immediately returns to the fold as an RB2/flex play ROS. This week, however, is even better, as Washington funnels production to the run, ranking 3rd in pass defense DVOA, but 31st in run defense DVOA. Ingram will get his, and should be a staple of most lineups.

Like I mentioned earlier, this Monday Night showdown between Washington and New Orleans is shaping up to benefit Thompson, and not AP. This Saints defense is very stout on the ground, and I think that should hurt Peterson, who should mostly operate between the tackles.

Not only is it very problematic that Miller is a game-time decision on Sunday night, but it’s not good that he only got 14 touches and 0 targets out of the backfield last week against Indy. I can’t trust Miller in my lineups with this combination, and I would advise looking elsewhere for an RB2/flex play.

Hey Razzball reader! Do you know what happened to Kenyan Drake! If so, you should hit me up in the comment section or on Twitter! On a serious note, we can’t be trusting a running back that only plays 40% of the snaps last week and racks in 4 total touches. Until the coaching staff starts using their best runner, we can’t be putting him in our lineups.

Like I mentioned earlier, it is a fantastic matchup for Calvin Ridley and the rest of this Falcons passing attack. Pittsburgh will likely roll out Joe Haden against Ridley, which is a 14% advantage for Ridley, according to Pro Football Focus. He’s a great flex/WR2 option as I would expect for Atlanta to come out strong tomorrow.

A few years ago, I would have been totally off of Cooks on the road in Seattle. However, this is a great matchup for the young receiver who has been on a tear as of late. According to Pro Football Focus, Cooks should draw Tre Flowers, which is a 47% advantage for Cooks. He should be locked into lineups as the Rams offense continues to roll.

With the injury to Fournette, Westbrook could likely see an increased workload as Bortles will look to increase his own volume against a very weak Kansas City secondary that has allowed close to 15 catches a game to oppsing WR’s, ranking 30th in pass defense DVOA in the process. Westbrook is a great fill-in WR for Mike Evans owners, or anyone else who needs a WR/flex play.

Okay, I was really wrong about Cooper last week, and he did quite well for himself. However, I am doubling down this week. Not only is his inconsistency a big negative for his likelihood to be in starting lineups, but I really don’t like his matchup this week against shutdown corner Casey Heyward. I’m not the best with predicting Cooper’s fantasy production, but I don’t like his chances this week.

If Goodwin goes Sunday, he’s going to see a lot of personal time with Patrick Peterson (which should be a great name for a talk show). I don’t think he should be a staple of lineups.

While he did look good last week in his first game back, I’m really lowering my expectations this week as he’ll likely get a good dose of Xavier Rhodes. While if he’s your best option, I see that you can’t bench him, but like I say a lot, if you’ve got better options, I’d look elsewhere.

Like I mentioned above, it’s a messy situation in Green Bay with the injuries to the wideouts. However, if/when these guys are ruled out on Sunday, that’ll signal the increased usage of Jimmy Graham. He played well last week, and I would expect the same with his usage rate likely going up.

While I’m not a big McDonald fan, I understand streaming him if you need help at the position, or if you’re an owner of Trey Burton. It’s a good matchup against the Falcons, who struggle greatly against the TE position (and was giving up a lot of production to Tyler Eifert before he got hurt).

It’s a tough matchup against the Chargers on the road, and while Cook has been playing well, I can’t trust him fully this week.

The Chargers offense should roll, which should benefit Sturgis, who has already been playing well as of late.

It’s a great matchup against a struggling Bills offense. I think their performance against Minnesota might actually be an outlier after all. Let’s hope I’m right!

Not only as Janikowski been struggling, I don’t expect this Seattle offense to truly get going in a very tough matchup against the Rams.

The Packers defense hasn’t been scoring enough in fantasy, so they’re the furthest thing from a must-start in fantasy.

Alright guys, that is all my time for today. Good luck to everyone in Week 5, and I’ll be back on Wednesday for my Week 6 Rankings! As always, if you have a question or comment, don’t hesitate to leave one below!