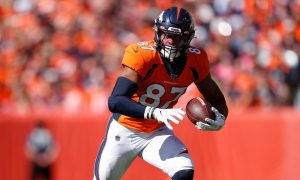 Needle in a Haystack

Stats are a funny thing, you can use the same numbers to tell many different stories by putting them in a certain context. I think it’s important not to just search for a “magic bullet” stat that describes everything but to analyze each number and see what story it’s telling. For instance, so many rate stats are not very helpful in a vacuum – the extreme example is a WR who catches 1 ball on 1 target for a 99 yard TD.

Should that player never see another target they will have the most points per target of all time. That hypothetical player is not relevant for our game, however. And even if they did see more targets, there’s no way they will keep up that incredible efficiency. I like to look at low volume/high efficiency rate stats only if we can tell a story along with them that the volume may increase. That’s how you can hope to identify an under-the-radar breakout. The reverse is also true, a player can be inefficient but if their team will use them heavily it doesn’t matter for us.

Today we will look deep targets to the tight end position, or targets over 20 yards in the air. I don’t know how helpful this will be in the grand scheme, but as I reviewed the data, my interest was piqued. One thing a box score can’t tell you is how a player is being deployed in an offense. Sheer target volume may not tell the whole story of a receiver’s role. Volume and depth of target together begins to paint a picture of how a player is being used. For our purposes of course we want more of everything: targets, air yards, receptions, yards and touchdowns! GIMME!

Most tight ends are going to be used on shorter routes, the proverbial “safety valve” for a quarterback. Many will get sent out to easy flats and holes in zone defenses with the mission to wait for a 5 yard catch and fall down. This is not very enticing unless the player is seeing 100 targets a game.

For a position that is usually pedestrian in its utilization, TEs that break the mold and are targeted on chunk plays can be extra special for fantasy as well as their real life teams. When the volume is going to be sparse, it makes sense to highlight players that can land big plays. I thought it would be fun to search for which TEs are being used in exciting fashion deep down the field, and see if any notable names popped up.

First I sorted a list of TEs by targets and narrowed the field to TEs who have seen at least 20 targets in 2019. Then I took their number of “deep” targets (targets where the ball traveled >20 yards in the air) and divided by total targets to get a deep target rate. The results of the 12 TEs who see over 10% deep targets are below:

Will Dissly – While Dissly is unfortunately out for the year but this usage is interesting when applied to his understudy, Jacob Hollister. We know Russell Wilson likes throwing deep (currently 3rd in deep ball attempts) and if he’s going to incorporate his TEs then we need to pay attention. Dissly came out of nowhere to be the TE1 for a time this season, and Hollister is a more interesting athlete.

Dawson Knox – I’m not sure the overall volume is going to be there for Knox to be relevant in his rookie year, but this is an encouraging usage pattern nonetheless. We definitely want TEs that are used for more than just check downs and Knox fits that bill. Paired with a QB in Josh Allen who is top 10 in deep attempts, make sure Knox isn’t on waivers in your dynasty leagues.

Mark Andrews – The first player on this list that pairs a nice deep rate with good overall volume. He is tied with TE stalwart Travis Kelce for deep targets and has been a massive value for drafters this year. His production has dwindled of late as he battles various injuries but the targets are there and he should continue to be a useful asset.

Eric Ebron – This is nice to see him here, however the overall volume is lacking and his role doesn’t seem to change regardless of the injuries to Colts pass catchers. Ebron is a good weapon for the Colts in real life but unfortunately he is still just a TD-dependent play. Because of the penchant for deep targets, he’s at least a preferred streamer.

News came out on Thursday that Ebron marched into Frank Reich’s office and demanded more utilization. While I don’t know what Reich’s answer was, it’s certainly not a bad thing to make note of.

Mike Gesicki – The fantasy community at large is coming back around on this athletic freak after his 6-95 outburst last week. With Preston Williams now done for the season, there is a good chance that Gesicki will be the #2 option in the Dolphins passing game. If he can maintain this exciting deep rate and add overall targets to his game, fantasy goodness is on the horizon.

Gerald Everett – The 3rd year TE has had his ups and downs this season but finding him here confirms that he is at least being used to stretch the field. The overall production is still that of a matchup-dependent streamer, unless we can be assured that the Rams will feature him more I’m not sure this is actionable information.

Noah Fant – You love to see this type of use for a guy who is also trending up in the playing time and total target departments. It has only been 2 games but Fant is averaging 6 targets/g since the departure of Manny Sanders. If this keeps up he is certainly a preferred streamer and could make his way into lock n’ load territory. Additionally, this is very encouraging for his dynasty status as well.

Irv Smith – Smith has been very active since Adam Thielen has gone missing. Since week 7, he has averaged 5 targets a game and unlike his counterpart Kyle Rudolph (7.6% deep rate), he’s being targeted down the field. More of interest to dynasty minded players for now, I like how the Vikings are using their new rookie pass-catcher.

Jimmy Graham – The volume is pretty meh, especially considering his 39 looks have been mostly without Davante Adams. Unlike many on this list, there is no reason to assume any kind of spike in targets. A good example as to why a single stat doesn’t always give us helpful information.

Dallas Goedert – Similar to what Irv Smith is doing, Goedert is emerging as a fantasy asset even being the TE2 on his own team. Of course for fantasy we like his deep targets compared to Zach Ertz (4.5% deep rate), but Ertz has twice as many targets. Fantasy relevance came come in many forms.

TJ Hockenson – Stop me if you’ve heard this before: a highly drafted rookie TE being targeted on deep balls is interesting. TJH makes for 3 rookies on this list, unfortunately his lack of use will probably stay the same. With 2 other receivers playing well, Hock likely maintains this profile for now. However, as I’ve stated before this type of us is encouraging for his future.