The top 4 matchups this week have a lot of question marks concerning amount of touches and who will be touched inappropriately.

Arian Foster should get the majority of the carries against a bad Rams’ run defense, but it’s hard to know how much Ryan Moats or Chris Brown will cut into his work.  Thankfully Foster got 4 receptions last week so he won’t necessarily sit in passing downs.  The bad news is that Kubiak was a little frustrated with him in Thursday’s practice.  Kubiak is a little frustrating himself.

Laurence Maroney looks like he’ll continue to get the bulk of the work, especially after Sammy Morris fumbled.  Of course Belichick might try to prove his genius by lining up Welker at RB all game.  But we have to believe Maroney will get his opportunity and against Buffalo that’s an opportunity of a lifetime.

The Cleveland running back situation went from old, to good, to bluh, to wha? I want so badly to be able to tell you who will get the bulk of the work between Jerome Harrison, Chris Jennings, and Joshua Cribbs.  I have a bias toward Jerome Harrison because I think he’s the best back they have, but I can’t get into the mind of Mangini (I’m sure it’s a dark and desolate place).  I can see starting Cribbs as a WR #3, but that’s about it.

We all know the tale of Justin Forsett’s woe and despair as the change of pace back to Julius Jones. It looks like he’ll continue to share carries, but I do think he’ll start to get a few more than JJ.  Does that mean you start him?  No, but if you have a couple flex slots I think he’s worth the risk against a bad Tampa run defense.

Take a look at the numbers: 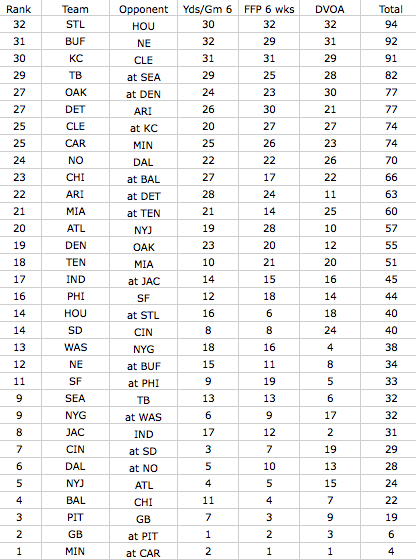