Chris Johnson has the best matchup of his entire life.  This should be the game Jeff Fisher says, ok, we aren’t going to make the playoffs, but we can give our fan base a 300 yard game.  The Razzball favorite, Jamaal Charles starts that playoff schedule we have been salivating over.  If he can keep from getting nicked up expect a huge game from him.  Thankfully, unlike Kubiak, Haley doesn’t sit his running backs after their fumbleruskis. The Bears’ sloppy second, Cedric Benson, has a horrid matchup and the Bears’ prom date, Matt Forte, has a tough matchup as well against Green Bay.  Not your best playoff plays! Here’s the chart.  Use it, but don’t abuse it. 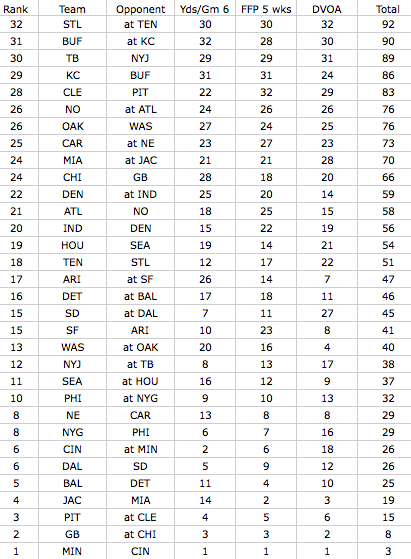