I’m going to go out on a limb and say that most of you have never heard of nor seen an episode of the television sitcom My Favorite Martian from the mid 1960s. Who am I kidding, I was born in 1977 and barely know much about the show. I watched a random episode or two when I was much younger, and probably again about 10 years ago during a late night online poker tournament on PokerStars. Remember when it was legal to play online poker in the good old U.S of A.? Dem some good times. My Favorite Martian starred Ray Walston as Uncle Martin who was a human looking extraterrestrial from Mars that piloted a one-man spaceship that crashed near Los Angeles.  Tim O’Hara, played by Bill Bixby, discovered Martin and took him in as his roommate. The show centered around the two and their adventures as they kept Martin’s martian origin a secret. The first two seasons were filmed in black and white, while the third and final was in color. 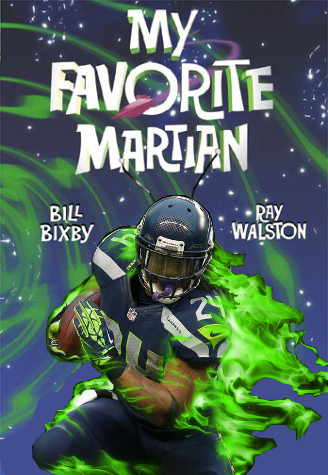 Just when you thought you had the running back situation figured out in Denver this happens and now you are out of free agent dollars! Fark! I drafted Montee Ball. Picked up Ronnie Hillman and now I have to try and get C.J. Anderson. Do you mean C.J. Spiller? No, I mean C.J. Anderson. The guy who carried the ball 13 times for 90 yards and caught 4 passes for another 73 yards and a touchdown. Can’t get a BJ, get yourself a CJ.

Got a little Jerry Rice in you? Didn’t think so. But you know who does, besides his ex-wife? Philadelphia Eagles wide receiver Jordan Matthews. Jordan is Jerry’s second cousin and he played like it last week catching 7 of 9 targets for 138 yards and 2 touchdowns. As great of a game as that was I wouldn’t get too excited as he hasn’t done much since his 2-touchdown performance back in week 3. Although perhaps with Mark Sanchez throwing the ball things will change. Somewhere Jeremy Maclin is crossing his fingers that they won’t.

Over the past 3 weeks Mychal Rivera has been one of the best tight ends in fantasy football. This is his second week in a row receiving these honors and I expect that after this week he will no longer qualify. If he does, that means he’s available in your league and you should seriously consider picking him up. Unless of course you own one of Gronk, Graham, Thomas or Olsen. Rivera had 6 receptions for 64 yards and a touchdown this week rewarding everyone that listened to me last week and picked him up.

Beast mode went feast mode on the New York Giants scoring 4 rushing touchdowns. 21 carries for 140 yards is no joke. Eat that Pete Carroll. Taste like Skittles? Tastes like victory to Lynch’s fantasy owners. Two weeks in a row as the top back and looking for more. Marshawn to the beat of his own drum! Honorable Mention (C.J. Anderson 29.2)

Sunday, Monday, Happy Dez. Tuesday, Wednesday, Happy Dez. Thursday, Friday, Happy Dez. The weekend comes, my cycle hums, ready to race to you… I know that’s a stretch but I’m putting it out there. This week was a long time in the making. With 6 catches for 158 yards and 2 touchdowns Dez Bryant exploded in London and shows why he is one of the best in the game. Honorable Mention (Jordy Nelson 30.25, Golden Tate 30.15)

Oh hot Graham this is my jam! Jimmy caught 10 of 13 targets for 76 yards and 2 touchdowns. Now if only your tight end could do that every week. He could if you owned Jimmy Graham. Honorable Mention (Julius Thomas 27.7)

After LeSean McCoy’s 19 yard game stinker he has fallen out of the Stats Machine’s top 10. Over the past month or so Eddie Lacy has begun his climb. At week 7 he had a 16.1 average score and this week he has risen to 19.32 and is just outside the top 10. I doubt his owner will give him up without a fight, but if you can get him… get him. Other running backs that have shown improvement since week 5 include Andre Ellington, Jerick McKinnon, Branden Oliver, and Jeremy Hill.

All appears normal again in tight end land with Graham, Gronk and Thomas on top.

There were no duds of the week worth highlighting.

Examine the stats yourself (Downloadable Spreadsheet).