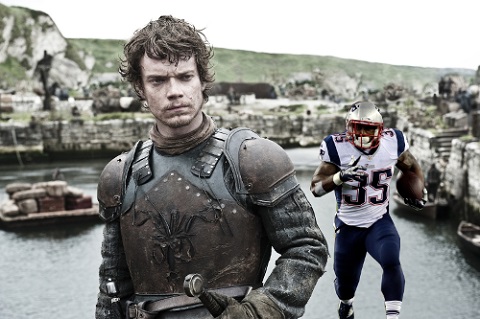 Perhaps more recently known as Reek, Theon Greyjoy is the heir of Lord Balon Greyjoy of the Iron Islands in the ever popular Game of Thrones saga. At the age of nine, he was left as a hostage by his father with the House of Stark as a condition of surrender. Despite being a hostage, Theon was treated well by they Starks, and he a Robb Stark became best friends. Depicted in the HBO series as an arrogant and narcissistic person on the outside, Theon is actually weak, insecure, and unsure of himself. After turning on Robb Stark when he was sent home to Pyke to seek an alliance with Balon Greyjoy, through a series of events, life for Theon took a drastic turn. He unknowingly attempted to seduce his own sister, was rejected by his birth father, seized Winterfell, was betrayed by his own men, and eventually found himself the tortured prisoner of Roose Bolton’s bastard son, Ramsay Snow, who cut off his manhood (literally), renamed him Reek, and turned him into his own human pet.

But now on to some legitimate Gray joy…

How annoying is it to start typing “Jonas” into Google and have it autocomplete to “Jonas Brothers”. Are those losers still around? I would have thought at best one of them would be on Dancing With The Stars or some other “I used to be famous and now I’m just a jabroni” reality show. Jonas Gray treated all of his owners that started him to perhaps the best single-game effort this season from a running back carrying the ball 37 times for 201 yards, “breaking the plane” 4 (count that 4) times! A minor stat change where a face mask penalty actually wiped out a -2 yard run put Gray over 200 yards. I wonder how many leagues that affected that give 200-yard bonuses. Honorable Mention (C.J. Anderson 29.15)

An drew you a picture of 6 receptions on 13 targets for 96 yards and a touchdown. I drew you a picture way back in week 3 where Andrew Hawkins was on your roster and I kept drawing a similar picture just about every week following. Clearly not enough of you listened to me because he ownership percentage is under 40 percent. I guess you gotta do what you gotta do. I had to drop him the week he was out with a thigh injury due to bye week constraints on my lineup, but I have since reunited with the hawk and am intrigued to see how his level of participation in Cleveland’s offense will be affected by the return of Josh Gordon. Honorable Mention (Reuben Randle 24.35, Kenny Britt 24.3)

Theon lost his wiener and my fantasy teams gained a Fleener. Coincidence? As I mentioned in my Wednesday post, with Delanie Walker still speaking gibberish I was left with Jermaine Gresham, Coby Fleener and that dude with a hyphen in his name in Tampa to choose from. I went with Fleener because of Luck and their Stanford connection. Jackpot! Fleener was perfect with 7 catches on 7 targets for 144 yards. With Dwayne Allen out Fleener becomes a top tight end in the big offense of the Colts. Fleener, Fleener, Chicken Deeeener!

Rushing for over 200 yards and scoring 4 touchdowns has earned Jonas Gray a second spot in this week’s Stats Machine. Here’s my only concern with Gray moving forward. You never know how Belichick is going to use his running backs. I have read that some say he saw something he could exploit against the Colts with Gray so he did it. Do you really think Shane Vereen is just going to disappear as he did last week? I don’t. His pass catching abilities make him too valuable to ignore. While I think Gray will still be a valuable asset to the Patriots, I am just not sure how fantasy owners will know how many touches he is going to get from week to week making it difficult to rely on starting him. Just let me see it one more time… Honorable Mention (Le’Veon Bell 36)

I don’t wanna grow up, I’m a Toys “Я” Us kid… Wait that’s not the same Jeffery? That’s Geoffrey the giraffe, formerly known as Dr. G. Rafee. My bad. How many of you consistently spell Alshon’s last name wrong just about every time you type it? Me too. Jeffery led all pass catchers this week with 17 targets, catching 11 of them for 135 yards and a touchdown. I don’t know about you, but the Stats Machine likes him more than his counterpart, Brandon Marshall.

Step up to the mic… Evans. With 7 receptions for 209 yards and 2 touchdowns you’re the next contestant on The Stats Are Right. In his last 3 games he has combined for 21 catches, 458 yards and 5 touchdowns. Mike Evans… Come on down!!!

I told you last week to get Lacy. And keep an eye on Charles Sims.

Mike Evans shoots up the ranks. Roddy White stops by to say hello.

The tight end headlines according the Stats Machine. Big week out of Coby Fleener. The Gronk overtakes Jimmy Graham as the top tight end. Jermaine Gresham had 2 receptions and 2 touchdowns. Tony Moeaki scored a touchdown!

There were no duds of the week worth highlighting.

Examine the stats yourself (Downloadable Spreadsheet).