In what is an interesting match-up, if only because we rarely get to see it (I’VE NEVER EVEN HEARD OF IT), the Broncos travel to Detroit to find out if last week’s fourth quarter “Manning being just being Manning” is actually repeatable. Much has been said of Denver’s lack of any rushing attack, mainly because of C.J. Anderson’s toe. Which seems ridiculous. I mean, you want a toe? I can get you a toe, believe me. There are ways, Dude. I can get you a toe by three o’clock this afternoon… There are some reports that Ronnie Hillman could start splitting carries, but I’m assuming the Broncos prefer positive rushing yardage, so I’m still in the Anderson camp, health and s’mores permitting. The Lions have started 0-2, I think mainly because Matt Stafford forgot that he has a thing called Calvin Johnson on his team. A stifling (I’m running out of adjectives) Broncos defense will continue to make that relationship tense (I’m running out of metaphors), but both offenses are capable of putting up yards. I for one hope this is the most amazing game in the history of games, only because with Drew Brees looking doubtful in Week 4, we’ll have a Sunday Night Football game that features Luke McCown and Brandon Weeden coming up. Jesus. 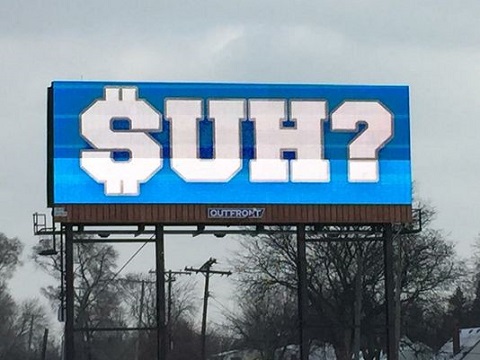 10 – The number of Anderson’s carries that have gone for no gain or negative yards… out of 24.

7 – The number of Hillman’s carries that have gone for no gain or negative yards… out of 21.

147 – Rushing yards allowed per game by the Lions, 28th in the league.

1 – Rushing yards allowed per game by the Lions after this game.

Matthew Stafford throws it to someone not named Johnson.

Golden Tate does something d*ckish.

You wonder why Gary Kubiak was able to return to head coaching in the NFL.

Megatron jumps 10 feet in the air for a causal catch.