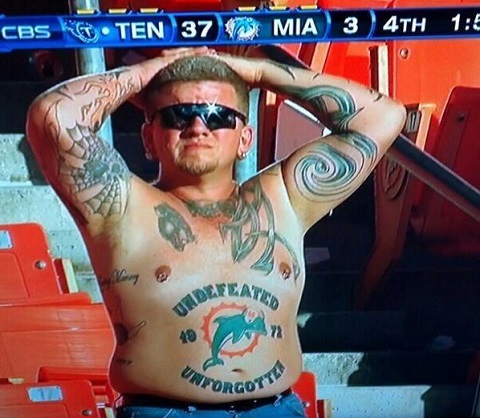 Remember the early season hype on the Dolphins? To be honest, I’d probably remember it better if those same people who hyped them up didn’t backtrack faster than a Michael Jackson moonwalk after Miami started the season 2-3. But after winning three straight on the heels of a capable Ryan Tannehill, a functional Lamar Miller, and an underrated defense, we probably have to take them seriously as a possible playoff team. Granted, the three wins were against a Titantic-sinking Bears team, the Jaguars (no adjectives necessary) and a San Diego team that is 93% IR eligible. Thus enters the Detroit Lions and the return of Calvin Johnson. Which I guess also signifies the return of Matthew Stafford to being mediocre instead of just terrible. And while it’s surprising that the Lions have gone 6-2 with such a derpy offense and a running game that matches my walking game, you’d have to think this is the type of match-up that could signify which team is for real. Or maybe not. So I guess it’s just like every other Week 10 game that doesn’t involve the Jags or Bucs, who don’t need to tell us anything. Just go home, both of you are drunk.

Week 10 Rankings have been updated for today’s games, for all your roster needs. You can check them out here.

Rashad Jennings did not travel to Seattle and is ruled out for today.

As of now, it looks like Martellus Bennett will be a game-time decision, but the Bears signed Blake Annen (Tight End) from the practice squad, so be prepared to go another direction.

Fred Jackson and Sammy Watkins will be playing today.

Lamar Miller is expected to be limited.

Tony Romo is still a  will be playing today.