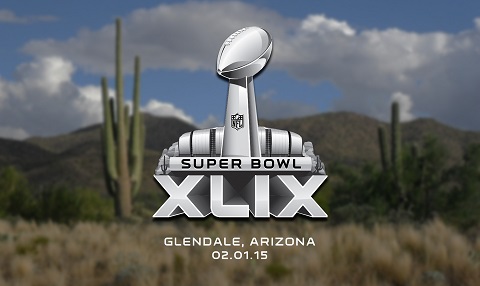 The long wait is over friends. Yes, we had plenty of time to talk ad nauseum about deflated balls, and truth be told, I’m quite relieved despite having a bounty of “ball” jokes being lined up so nicely for the last two weeks. I’ve come to realize that I can make d*ck and balls (and fart, if needed) jokes all day long, I don’t need the 24/7 news cycle and Super Bowl click-bait on “deflate-ghazi” to do this. What a revelation! You’d think it was a revelation of some sorts to some people that the amount of collective time spent on balls, deflated or otherwise, really does show how competent the NFL is with issues that no one should really give a sh*t about. If only Ray Rice punched a deflated ball, something could be gleaned from this! Other highlights during this wait included Marshawn Lynch just barely avoiding fines by doing the very least on Media Day, and Richard Sherman contemplating what to do if his child is born later today. Yet barely any mention of Aaron Hernandez’s murder trial. Priorities people. Priorities. But hey, in the end, football is back for what is essentially the biggest sports event of the year, so sit back, enjoy whatever fried foods and alcohol is in front of you, and if we’re lucky, this game will be marginally more entertaining than last year’s. So hopefully past the midway point of the first quarter…

Take a sip if…

– Tom Brady acts like a total b*tch when someone touches him.

– Pete Carroll acts like a douche. Take a baby sip.

– Russell Wilson bullsh*ts his way out of a sack.

– You notice the extra “L” in Luke Willson’s name.

– The 12th man is mentioned, even though they’re playing 1,400 miles away from Seattle.

– There is any Apple commercial shot on an entirely white background.

– They show a time-lapse of the stadium retracting the grass field.

– NBC mentions either the Olympics or soccer.