This game was like my sex life in that I missed half of it, had no idea what was going on, and didn’t particularly care about either of the parties involved… Until the ending. In what was your run-of-the-mill Monday Night Football affair until the last few minutes of regulation, I guess I should have known better in a game featuring the Lions that something profound and utterly incomprehensible was going to happen. And boy did they deliver. After capitalizing on a corner blitz which forced a Russell Wilson fumble and a fatman touchdown, the Lions drove all the way in Seattle territory down 13-10 with minutes left to go. It had all the makings of a late Seahawks collapse… and then Megaderp happened (shown above). Catching the ball and trying to forcing his way into endzone, Kam Chancellor knocked the ball out of Calvin Johnson’s hand, which was immediately batted out of bounds for a touchback by Seattle’s K.J. Wright. And thus it was… Seattle’s season has rebounded a bit and the Lions are now on pace to be the usual Lions we know and love. Can they once again achieve the feat of 0-16? Only time and lots of alcohol can tell…

#NFL tells ESPN Lions should have been given the ball goal to go in Seattle. Back judge makes wrong call in same end zone as #FAILMARY. Wow.

Ameer Abdullah – 13 CAR, 33 YDS and 2 REC, 11 YDS. I read in the Economist that Detroit is offering some tremendous tax breaks and making a serious effort to court the Sadness Industry. Abdullah has signed up to be their spokesperson.

Jimmy Graham – 4 REC, 29 YDS. Jimmy Graham didn’t do much last night. You know, I bet he’d be a good basketball player. I wonder if he has any experience playing basketball.

Calvin Johnson – 7 REC, 56 YDS. Oh Calvin… finding new and exciting ways for the Lions to suck. Well done. But I bet Herman Moore is spinning in his grave right now.

Jermaine Kearse – 2 REC, 84 YDS. Detroit is Kearsed now. Low hanging fruit, I know. WHY HAVE YOU FORSAKEN ME RECOVERY WATER? 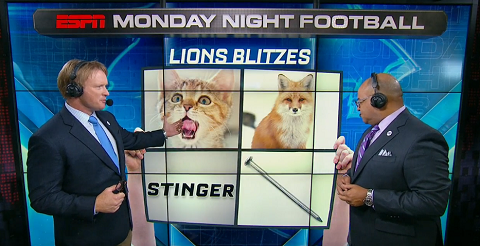 Jon Gruden is literally going Sesame Street on us now.