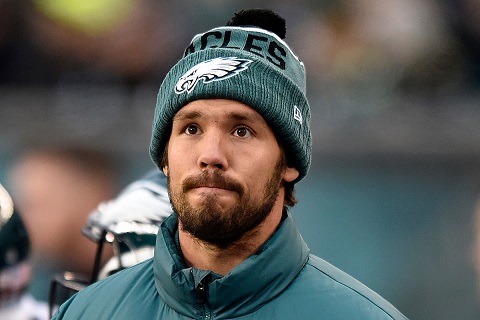 In what is surprising news for an unsurprising outcome, Sam Bradford finds himself traded yet again, this time to the Vikings. After Teddy Bridgewater went down with 2,398 explosions in his leg, many wondered what direction the Vikings would go. Was it going to be a destination for Mark Sanchez (LOL)? Maybe even Colin Kaepernick? Or as I aptly put it the other day on our weekly Podcast: sticking with the status quo and having A Shaun Hill to Die On? All of these options could have been considered for a franchise (including other ones), that despite suffering a huge setback this year by losing their starting quarterback, still had a lot of pieces to compete in the near future with. And while the type of injury Bridgewater suffered is something that could affect his career outlook, so far the prognosis had been slightly positive. Even with that in mind, the Vikings’ Rick Spielman and Mike Zimmer decided to mortgage a major part of their future for the very mediocre, and very injury-prone Sam Bradford. Here’s how the deal looks based off today’s reports:

*The conditional pick can become a second or third rounder based on the Vikings success, as in, for example, if they reach the NFC Championship Game, it turns into a third, and if they reach the Super Bowl, it becomes a second rounder.

Okay, so, my non-expert opinion is this:

This post is short and to the point. Who’s playing, who’s sitting, and who’s status do you need to monitor leading up to game time for this weekend’s match ups. Week 17 is bear and it’s always a crapshoot trying to plan for championships won in this week. I got the AFC and my brother in Razz, the Hateful One, has the NFC. We’ll give you what we got and try to help you navigate through the madness. Just so we’re clear your Commissioner is an A-Hole. Really Week 17? I remember my first Fantasy League too!