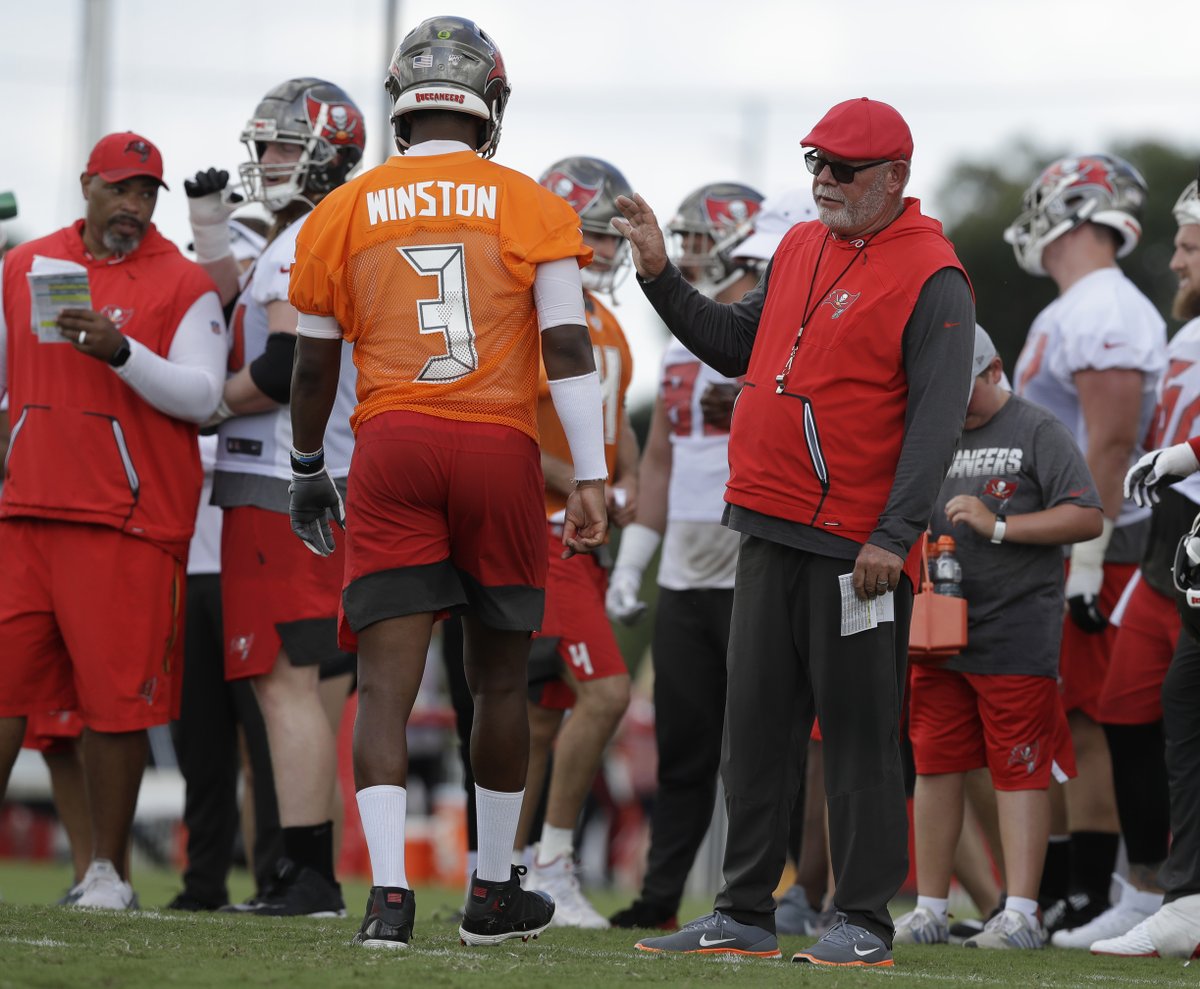 With Training Camp in full-swing, it’s a perfect opportunity to take a look at some key players that are entering their final year of a contract, looking to prove themselves to their team or multiple teams if they’re likely to hit free agency. In recent news, many elite football players have been holding out of training camp in order to get new deals, like Ezekiel Elliott, Melvin Gordon, and up until a recent contract extension, Michael Thomas.

Let’s take a look at some players entering the final year of their contracts, and some players that are currently holding out, to see how their statuses will impact our draft decisions.

Jameis’ tenure in Tampa Bay can be described as one with flashes of brilliance mixed in with really bad decision-making. The former first-round pick is entering his fifth season, and while some signs point to success this year under new HC Bruce Arians and Offensive Coordinator Byron Leftwich, this will be a make-or-break season for the QB. Arians has a great deal of prior success with quarterbacks, most notably the revival of Carson Palmer, who averaged 20.8 fantasy points per game in 38 games between 2015-17. Arians should bring out the best in Winston, with a full offensive arsenal featuring Mike Evans, Chris Godwin, and O.J. Howard. However, if Winston can’t limt his offensive mistakes, and the Bucs once again finish their 2019 campagin on a low-note, it could very well be the last time Jameis finds himself in a Bucs jersey. It will definitely be a motivating factor for him, and he brings immense upside in fantasy this season.

Often grouped with Winston, Mariota finds himself in a similar situation heading into his 5th season. As the Titans seemed to embrace a ground-and-pound offensive style, Mariota’s TD rate has dipped from over 5% to under 3% these past two seasons. What’s good is that he finished with a career-high completion rate last season, but that might not be enough to remain in good favor with the team, and he really needs things to finally come together. He’ll be getting back Delanie Walker, and the new additions in rookie A.J. Brown and Adam Humphries in free agency to complement Corey Davis, which could mean that the Titans get more aggressive in the passing game in 2019. While I’m not exactly interested in him in fantasy this season, I do think that all the pieces are there for him to put together a solid season.

Through three seasons, Drake hasn’t been a very consistent producer. However, that is likely due to low-usage under former coach Adam Gase. However, heading into his 4th year, he’ll get a much-needed change in Miami as Brian Flores will be stepping in, and should utilize him as the RB1 he can be. What’s really helpful for Drake’s stock in 2019 is the 156 vacated carries in the Miami backfield with the departure of Frank Gore. Kalen Ballage has been getting some love during the offseason and preseason, but Drake is the proven commodity in this backfield. In 12 games where he received at least 9 carries over the past two seasons, he’s averaged close to 18 touches for 96 total yards and 0.5 TD’s per game, with a 4.66 YPC. That’s the type of consistency you want from your lead back, and Drake can be just that for Miami. He’s a fine value this year in fantasy, and should have no issues earning a contract extension with the Dolphins once the year is done.

Thanks to his off-the-field issues, Hill should be determined to prove to the Chiefs and the NFL that he deserves a second chance, and eventually, a contract extension. If for some reason he has a bad season, he might not get that second chance. However, I think the chances of that happening is pretty darn low. He’s in the perfect environment with quite possibly the best offense in the game, so he’s got all the tools necessary to piece together a great season. There is a real chance he could lead the NFL in receiving yards when the season is all said and done.

Even with the arrival of Le’Veon Bell, Anderson is crucial to this Jets offense, and it showed in the back end of the NFL season last year. During Weeks 14-16, otherwise known as the fantasy playoffs, Anderson only finished second behind Julio Jones among receivers in fantasy scoring. With Sam Darnold developing further in this offense, Anderson should have no issues putting together another impressive season, earning him a contract extension from New York. He’s a great WR to target on draft day.

I’m going to group these two together because their fantasy stock heading into 2019 is pretty much intertwined. When both Ebron and Doyle played together last year, Doyle was the better player. He saw more snaps, more targets and more fantasy points. The issue is, Doyle couldn’t stay healthy, and only played in six games. When Doyle was off the field, Ebron exploded, and finished 4th among TE’s last year in fantasy. While I do expect to see some major regression for Ebron, both players should be greatly involved in this passing game that should take another step forward this year. I doubt Ebron or Doyle will find themselves out-of-favor with the Colts once the season is over, so while they both have some job security, we’ll have to see how they perform in fantasy with both of them on the field for a full season.

What To Do About Melvin Gordon and Zeke Elliott?

Both Gordon and Zeke find themselves in similar spots, and a spot that Le’Veon Bell found himself last year. Both players could sign an extension today, tomorrow, or the day after, or they could hold out into the 2019 season. Neither the Chargers nor the Cowboys (especially the Cowboys and Jerry Jones) seem to be budging when it comes to giving into their backs, so it wouldn’t shock me if both players hold out into the season. As of now, I don’t want to take on that risk for either player, the same risk that Le’Veon Bell owners took on before last season. If you do find yourself taking either Gordon or Zeke, prepare for the worst.