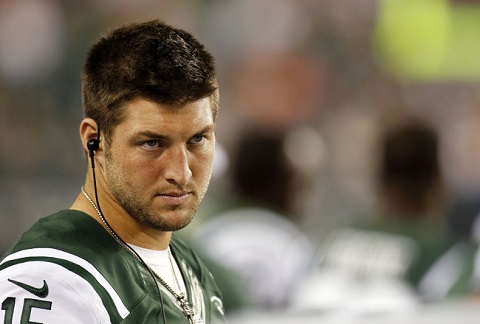 Jay Glazer was first to report the news, and so he shall be known as the harbinger of all the Tebowmania that will certainly come during the offseason. Then again, now that I think of it, the true villain here is probably Chip Kelly and his quest to destroy the universe as we know it by innovating trades set to a 25-second clock. “What, I only have 20 seconds left to make a transaction? Quick, sign Tebow!”. And don’t get me wrong, what Kelly has done this offseason is nothing short of entertainingly mad, and we should certainly note that he’s now assembled three quarterbacks who were are former first round picks. That’s something. But there should be an intervention at some point, I mean, there are now reports surfacing that the Eagles are trying to trade for the second overall pick (the Marcus Mariota pick, unless the Bucs are trolling everyone) in a three-team trade with the Titans and the Chargers. If not an intervention, for the city of Philadelphia’s sake, maybe some new federal regulations should be created? I mean, something must be done before Kelly completely recreates the 2012 Jets…

The aforementioned trade would have the Eagles receiving the second overall pick from the Titans, the Chargers would receive Sam Bradford (lol), the Eagles first-round pick and the Titans second-round pick. The Titans would receive Philip Rivers and the Eagles third-round pick. A “sports-web” vehicle named “Rant Sports” is reporting this, so it seems totally legit. Totally. Though, with LaDanlian Tomlison adding his own hot take to the situation, and the status of (or lack thereof) of a new stadium deal in San Diego being in question, there is certainly some doubt on whether or not the Chargers will be retaining the services of Rivers. I’m personally crying myself to sleep every night to get through these traumatic times, but that could also my normal alcohol consumption causing that as well.

And yes, just in case you missed the three-hour schedule release… party? Gathering? Whatever it was, there were rumors that Chip Kelly was going to trade his week 3 matchup to the Panthers for Jonathan Stewart (haha, get it? He’s the Duck.), here are the highlights:

The opener on Thursday has the Steelers at the Patriots, which would be great if they had some running backs. Week 1 also includes the Packers at the Bears (with the Bears going to Wisconsin for the Thanksgiving prime time game) and the Giants at the Cowboys. Week 2 features the Seahawks at the Packers, Patriots at Cowboys in Week 5, and the Christmas Eve game features the “Carson City” showdown with the Chargers taking on the Raiders. Merry Holidays!