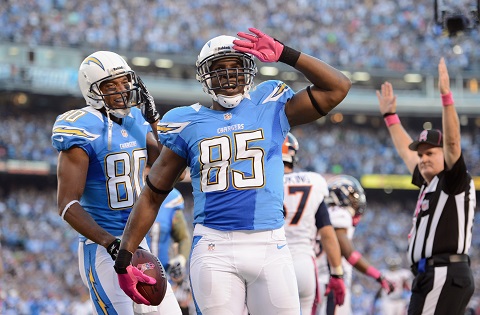 Welp, there goes my supply of NyQuil. As your local (also only) Chargers fan, this essentially is the cherry on top of what could be considered, at best, a tumultuous offseason. Everything from Philip Rivers trade rumors, to keeping Donald Brown (why?), and even continuing reports that the Chargers are probably moving to Los Angeles wasn’t enough. Nope. Now, Antonio Gates has been suspended four games for PED use, because hey, why not?

“In my 12 years in the NFL, I have taken tremendous pride in upholding the integrity of the NFL shield and all that it entails.  I have taken extreme care of my body with a holistic approach and never taken any substance that was illegal or banned by the NFL.

“In an effort to recover from a long season and although I was unaware at the time, I regret to confirm that I tested positive for a substance that is currently on the NFL banned substance list.  As an NFL veteran and team leader, I should have done my due diligence to ensure that what I was taking for recovery was within the NFL guidelines.  I have always believed that ignorance is no excuse when it comes to these issues, and I take full responsibility for my actions.

“I’d like to express my sincere apologies to the Chargers, my teammates, coaches, fans and the league who have always supported me and expected and gotten nothing but the highest level of integrity from me.”

For a second, let’s not pay attention to the fact that “…never taken any substance that was illegal or banned by the NFL” and “…I tested positive for a substance that is currently on the NFL banned substance list” were written right next to each other, we have to assume that this will certainly have a rippling fantasy impact.

In my tight end rankings, I had him ranked fourth, just behind Greg Olsen and ahead of Travis Kelce. This obviously changes, and my updated rankings have him now at 10. My reasoning is: there really isn’t anything better behind him at that spot. I could see myself wanting Zach Ertz and above, because they’ll seemingly produce something in those four games, but beyond that, I’d rather roll with Gates on my bench and stream those four weeks.

In terms of who fills in… I’m going to be a bit more bearish on Ladarius Green than my peers… at least I think I will be. Here’s what I said about him recently:

“And do keep an eye on Green, who’s long since been forgotten. He may actually build some ground work to be a legitimate tight end option going into 2016.”

It’s no secret that Rivers prefers to spread the production around, and while I see the Chargers making Green their de facto number one tight end option, that doesn’t necessarily mean “Antonio Gates” like production. I moved him up a few spots, but I want to see how the situation develops. In the end, time off may actually be a boon to Gates value, as age and time in the league has taken it’s toll (including past injuries). His late-season fades have become common, and perhaps this staves it off a bit. Honestly, this seems like a pretty good value play if you plan on drafting Gates, but, as I just stated, do beware of Ladarius Green’s hype train getting off track. He certainly has the ability, and I do like him a lot, the thing is, he’s the type of guy where you want to see it first before you buy-in.

As for Rivers and the Chargers offense in general, I actually don’t see any issues here. True, Gates adds to the flow of the offense, but with the new addition of Melvin Gordon, Stevie Johnson, and the return of Danny Woodhead, I don’t think the bar changes here.

Regardless, even with all of this, the real question is: has he ever played basketball?