Welcome, everyone, to the first chapter of the story in which the Patriots win yet another Super Bowl.

They lost the opener? To Andy Reid? And Alex Smith? (Laughs for nine hours. Stops to breathe. Laughs another nine hours. Another inhale. Sleeps for six hours. Rinse and repeat.) So yeah, football’s back guys. And with it came the usual hour-and-a-half pregame show that generally felt like 127 hours while also at the same time watching the ending of 127 Hours for 127 hours straight. (If I ctrl-effed “hours” right now, my monitor would light up like a Christmas tree.) So of course NBC Sunday Night Football would premier on a Thursday, it’s still a “day”, am I right? Bob Costas looked even more like a shambling corpse than last year. Tony Dungy looked as much like Nosferatu as he ever has. And then we were treated by a Marky Mark recap of last season’s Patriots Super Bowl win, with all the unnecessary lording over that would entail. I was actually surprised he was able to inform us of what happened in the fourth quarter since he checked out in the third with the rest of New England, but the fact remains that only the Patriots could show up a team which they have no rivalry with like it was a team full of Mangini’s.

The actual game itself began in prototypical fashion, with the continued slow evolution of Alex Smith turning in Rex Grossman, a human being who would actually look better if he had cauliflower ear. Think about it. And then there was Kareem Hunt with his first carry as a professional…

So I guess we should all be happy that Kansas City didn’t have the running back depth to bench Hunt for the game, as Coaching the NFL 101 first week of class teaches, but you might wonder if Andy Reid actually learned a lot from watching the Super Bowl from home last year too. Like how to eat a tub of wings, some fried chicken, and pizza at the same time during a four-hour sitting.

And by the half, as Hunt, Tyreek Hill, and Alex Smith (but not Travis Kelce! Thanks Obama!) began to show us a world that didn’t involve 183 check-downs and 1-yard wide receiver screens, I told myself (and you’ll be proud of me): “If the Chiefs pull this one out, I’ll never fat-shame Andy Reid again. Until next week.”

And guess what? Wishes do come true…

Danny Amendola – 6 REC, 100 YDS, 16.7 AVG, 27 Long, 7 TGTS – Amendola did the best Julian Edelman impersonation he could (oh the grittiness!), but still succumbed to the great concussion scourge (or what the NFL calls: a “restrictive PR issue”) early in the fourth quarter. He’ll have 10 days until Week 2 but also has a robust history with concussions, which could be positive news to all the Phillip Dorsett owners out there. All none of you.

Brandin Cooks – 3 REC, 88 YDS, 29.3 AVG, 54 Long, 7 TGTS – This line would have looked a lot better if there were points for drawing PI flags. He drew three, two of which would have most likely been touchdowns, maybe three. So I suppose if this keeps up, we should all handcuff Cooks with Mike Gillislee…

Rob Gronkowski – 2 REC, 33 YDS, 16.5 AVG, 17 Long, 6 TGTS – Seems to be more of an Eric Berry thing instead of a Gronk thing. I’d also blame this on the fact that Tom Brady owns too many pairs of Uggs, but I generally try not to hit the nail on the head so often, ya know?

Tyreek Hill – 7 REC, 133 YDS, 19.0 AVG, 1 TD, 75 Long, 8 TGTS and 2 REC, 5 YDS, 2.5 AVG, 4 Long – Hill could have had an even better night but was constrained in the fourth quarter due to cramps, but Hill owners should still be completely smitten for the fact that Andy Reid used him all over the field in different formations instead of eating him. With the Eagles secondary being questionable at best and an incredible tasting swiss cheese at worse, Hill could put up another solid game.

Chris Hogan – 1 REC, 8 YDS, 8 LONG, 5 TGTS. A white ex-lacrosse-playing Patriots receiver? It’s as if a bunch of Southie’s melted into a Patriots jersey. And, I have to ask, was that the first mention of Chris Hogan as a “former lacrosse star”? I’ve got a bingo chart here I need to fill… All I need is someone to mention that Jimmy Graham used to play basketball. You guys think my chances are good? 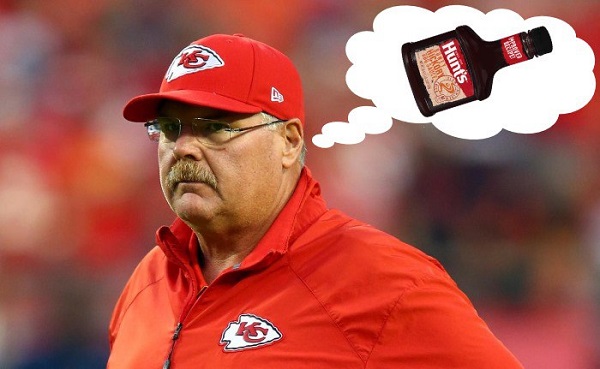 And boy did he look good. No, not Andy Reid. Unless you like tomatoes. I mentioned it in a comment last night with a reader, but the way Hunt moves, he plays long, lean, and fast, kinda like a young (and functional) Chris Johnson. Or maybe just a midnight tryst at Cris Collinsworth’s house.