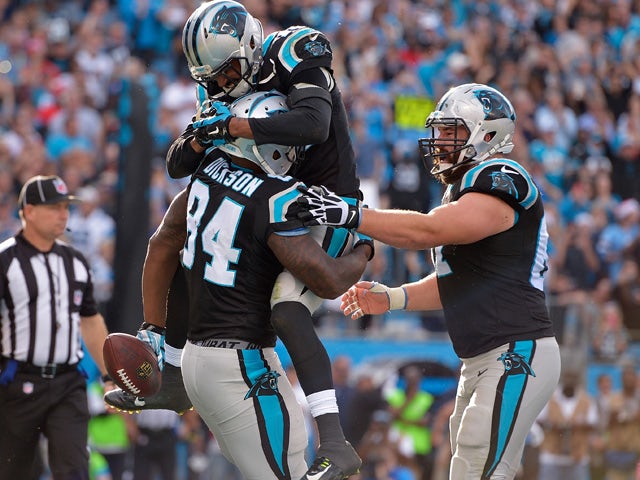 Another Sunday has come and gone. There were some really good games this week that we are goinig to talk about here in a second. I just want to take a second to tell you that if you are struggling badly or are hanging in there but need a boost, be sure to check out Rudy’s awesome season long or DFS football tools. Rudy’s formula is making some really great calls that have gone unnoticed in the rest of the industry. Along with us, let Rudy help you out for the rest of the season!

Let’s get to the games!

Show of hands of people who started the Jaguars defense? Not me. Ben Roethlisberger, Jay Cutler, or banging your head repeatedly against the wall while listening to “My Heart Will Go On” by Celine Dion for the rest of the season, which would you pick? Give me Celine Dion in a heartbeat. Leonard Fournette is a beast. I think this is his first game of more than 4.0 YPC but that doesn’t really matter because he’s putting up fantasy points at a fantastic rate. Piss poor quarterback play didn’t stop Antonio Brown from being the best wide receiver in the game but it’s really taking a toll on my man crush, Martavis Bryant. Le’Veon Bell couldn’t get it going on the ground, but he had a good PPR day, catching 10 passes.

The Giant’s season is officially over. On top of falling to 0-5, the Giants lost their 3 best receivers in one game. The most devastating of all, it looks like Odell Beckham Jr. will miss the rest of the year. At this point the Giants are going to be virtually unwatchable. Orleans Darkwa may have scored more fantasy points today, but Wayne Gallman saw the most touches and averaged over 5 yards per carry out of the backfield. He’s still the back that I would like to own going forward.

Philip Rivers had a putrid completion percentage, but he got the Chargers the win and helped his fantasy owners who had the faith to start him. I had him ranked in my top 10 quarterbacks this week, and I’m glad that I did. I hope nobody benched Melvin Gordon! The Chargers involved Gordon in the passing game and he found the end zone a couple of times through the air on top of over 100 rushing yards. Hunter Henry saw 8 targets today, including a couple in the end zone, one of which he converted. There is hope for Hunter Henry going forward.

At this point last year, we were all laughing at the 2016 quarterback class, even though it looked like Carson Wentz had some potential. It seems like Wentz is surpassing the expectations of even the most vigilant truthers of his talent. Wentz spread the ball out to 8 different receivers on Sunday. Legarrette Blount continues to see the bulk of the carries in the Philadelphia backfield and he’s busting out big runs too. He was one holding call away from a RB1 caliber outing. Carson Palmer is quietly putting together a really productive year. The only running back that is ownable in Arizona while we wait for David Johnson to come back is Andre Ellington.

Newly feminist quarterback Cam Newton is back to being one of the best quarterbacks in the game. I think that the emergence of Devin Funchess is a huge contributor to this. Let us not forget about the monster game that Ed Dickson had. I imagine that people who started Dickson in their DFS lineups as an afterthought were pretty profitable today. Matthew Stafford had some garbage time magic to save his fantasy day with a couple of second half touchdowns. Marvin Jones is staying relevant but I’m still weary for the rest of the season. Eric Ebron has still not been seen in weeks, search parties are starting give up.

I gave up on Jay Cutler after last week, but Jay Cutler gave up on us years ago. Jay Cutler ripped off a magnificently terrible 92 yards against the same defense that rookie quarterback, DeShaun Watson completely dismantled only a week ago. The absence of a passing game isn’t doing Jay Ajayi any favors. Matt Cassel got a start today and Colin Kaepernick still doesn’t have a job. This game was terrible, I don’t want to write about it anymore.

Speaking of horrible games, I introduce you to the 3-2 New York Jets! Elijah McGuire saw the bulk of the carries for the Jets and turned it into 20 yards. This backfield is ugly and I want no part of it. But, at least Austin Seferian-Jenkins is a start-worthy tight end when he is sober. I want as many pieces of ASJ as I can get in fantasy football. Isaiah Crowell had his best game of the season and still managed to look absolutely horrible. Deshone Kizer was benched for Kevin Hogan and it didn’t matter at all, but keep an eye on Ricardo Louis, he seems to be the receiver of choice in Cleveland with 8 targets this week.

A.J. Green had an awesome day and a horrible day at this same time. Green was the main culprit of two turnovers but also had 189 yards and a touchdown. Joe Mixon has officially arrived! Joe Mixon was able to find the end zone on his way to 15 carries for 51 yards. I’m starting to feel like LeSean McCoy will never find the end zone again, what a shame. We need more than just yards, damnit! This offense wasn’t helped at all by losing Charles Clay. Brandon Tate, whom I’ve honestly never heard of, was able to find the end zone and Nick O’Leary, whom I’ve also never heard of, lead Buffalo receivers with six targets.

This was actually a very exciting game if you pretend that the first half never happened. I’m loving the 10-minute overtime sessions so far. Brian Hoyer had one of the best 4th quarters that we’ve seen this season in a likely top-5 fantasy effort for the week. I must have missed what happened to Carlos Hyde. Either way, Matt Breida led the 49ers in carries this week. Pierre Garcon had a nice day and so did former Iowa Hawkeye, George Kittle.

Jacoby Brissett continues to hold his own as Andrew Luck’s replacement. He threw for over 300 yards and is making T.Y. Hilton great again. Andrew Luck time is on the horizon. Hopefully Hilton is here to stay. Marlon Mack had an excellent day against a terrible defense. This was the one week that he was usable and I doubt anybody started him. He may see an uptick in touches, but this was likely the best game that he’s going to put up this season.

Todd Gurley ended up disappearing this week after all. That’s a bad call by me. I honestly thought that the Ram’s offense would do more here. I still love all of these pieces going forward, they are going to continue to put up a lot of points despite today’s outcome. The Seattle offense was just as ugly. Neither Thomas Rawls or Eddie Lacy were able to out-class each other in an even split of work load. I still like Thomas Rawls to come out of this on top, if he can stay healthy, but I don’t really want anything to do with this backfield.

The Raven’s backfield appears to still belong to Buck Allen. Oakland has a very bad defense so I think that today was probably peak Buck Allen performance and Alex Collins still had the longest run of the day for the Ravens. Mike Wallace averaged 44.3 yards per reception today. Call me crazy, but I don’t think that is sustainable. Either way, Wallace is having a pretty nice year. Michael Crabtree had a nice day as well, and old man Marshawn Lynch found the end zone as well.

This was the best game of the season so far, in my opinion. Aaron Jones was incredible and if I were the Packer’s, I’d hand him the starting job. You can still find plenty for Ty Montgomery to do. Ezekiel Elliott did all that he could to try and win it for the Cowboys and put up good numbers, despite not finding the end zone. I’m comfortable if Dez Bryant is my WR1. Despite what the media and fans think, he’s starting to put up some decent fantasy football scores. The Cole Beasley fan club had plenty to celebrate as he found the end zone twice. Welcome back, Davante Adams! What a great way to come back from a brutal injury. Not only did he lead the way for the Packer’s receivers, he also scored the best game winning touchdown that we have had this season.